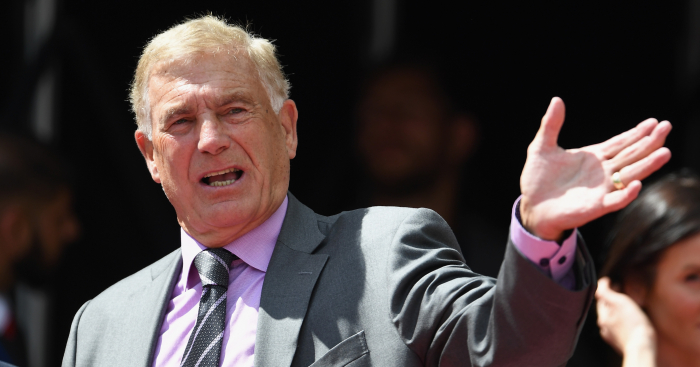 A Love Letter To… an absolute doyen of football broadcasting, man who tans better than anyone, and a man who isn’t afraid of West Ham fans. That’ll be Sir Trevor Brooking, then…

Why the Love?
A West Ham United legend, playing 647 games for them from 1966 to 1984. Scored the winning goal in the 1980 cup final and had a stand at Upton Park named after him. A wonderfully modern player who could easily have played the game in 2018, he had vision and grace even on the mud and sand pitches of the 1970s. One of those players who seemed to see the bigger picture in slow motion.

From 1984 he began to do punditry on the BBC as well as co-commentary. Made a return this summer during the World Cup and we suddenly realised how much we had missed him.

We all liked Trev in the 80s because he was one of the more considered and articulate people in football. An Essex lad he was always more of sophisticated gentleman of the game than most (latterly nicknamed Hadleigh after the 1970s TV show aristocratic character) He’s never portrayed any of the more modern tendencies sold to us as typically Essex via reality TV.

Always seemed like a really sensible, decent cove, his face set in an almost permanent, shark-like grin. He was very much a bridge from the old fan-led world of football to the newer media-led world. For years he was a MOTD institution, often only seen through bleary drunken eyes.

In later days he held several administrative positions in football, ending up in 2004 as Director of Football Development at the FA where he has continued to be a lone voice of sanity in a notoriously inept, over-promoted, tinned-eared organisation. Some say the success in recent years of England’s development teams is as much down to the ideas laid down by Trevor as to anything else. The fact that he would be the very last person to say this speaks highly of his integrity and class.

The very definition of the term elder statesman.

Superhero Skills
One of the first pundits to develop, albeit unconsciously, a catchphrase. Even it was only the word “well” with the vowel drawn out, it was what all the impressionists focused on and it became quintessentially Trev. Always referred to The Hammers as “my old club” followed by a small chuckle.

In many ways, Trev cleared the forest and established the ground upon which modern punditry could be planted. Easy to forget that while ex-pros had been used to comment on football on TV since 1970, no-one became a national institution on Saturday night TV before Trev did, without also being a presenter.

We probably all took him very much for granted simply due to his omnipresence on the BBC through the 80s and 90s and into the new millennium. Hard to believe that when he began on TV he was only in his mid-30s because in a way, even though he is now a white-haired old lion of 69, he always felt rather timeless. He was very much a grown-up even at 36 in a way that is less common these days.

We were all in admiration of the fact that he had married a Finnish au pair, which sounded about as sexy and glamorous as it was possible to imagine, having been brought up on the notion that, for some reason, ‘au pair’ was a by-word for a proper saucy madam who you might get up to no good with in a sauna, whilst eating a Ryvita and drinking schnapps. We thought this was probably why he was always smiling.

There’s never been any doubt though that behind the smile was always some steel, steel forged in the tough football culture of the 60s and 70s. It was no surprise that he stepped in to manage ‘my old club’ in 2003/2004 on two separate occasions and did rather well. OK he was relegated, albeit with a record 42 points, but he has only ever lost one game as their manager in 14 matches. While he always said it wasn’t a job he wanted permanently, his 63% win rate suggested he had some talent at it.

As a director of West Ham he’s also had to answer for the club’s fans behaviour on a few occasions. In last season’s game against Burnley, as fans protested aggressively in front of the director’s box, causing them to flee, only one remained: Sir Trev. Who sat there calmly as all raged around him. There aren’t many 69-year-olds that would do that when faced with some rather cross Hammers fans.

Style Guru?
Back in the day, it was always very much Man at C & A (ask your dad) for Trev and he always seemed at home in beige slacks with a high polyester content and a grey-hued jacket that looked like it was made out of asbestos. I would like to believe at some point he owned a safari jacket and a garish orange and brown kipper tie.

For some reason, I just can’t imagine he has ever owned a pair of jeans, even though that seems unlikely. These days favours a well-cut plain suit, white shirt and striped tie. Never without that burnt mahogany tan.

What The People Say
As part of football’s broadcasting heritage, people of a certain age all recall him with affection, if only because he was always there on a Saturday night as we grew up.

Absolute gent of a man, met him in the old West Ham supporters club on a Betway promo. Had time for everyone, made a quip about me asking for a selfie. A true legend of the English Game as a player, administrator and in the press.

Trevor is the epitome of a patrician – wise, sanguine & highly respected. Moved smoothly from superb player to elder statesman.

His commentary on Actua Soccer 2 was hilarious. Particularly a fan of his assertion that the rain would make the ball “greazy.”

The acceptable face of Essex. Has more of a deep, calm accent and not the lazier vowel dropping that my generation of Essex chaps have. Comes across as a gentle soul, and not one to rely on “in my day it was all better” cliches too often.

Always a pleasure to listen to and has a lot of knowledge to impart, should be running the FA and having more input into the game.

It was lovely to hear him back in broadcasting.

Was so happy to hear him back on the radio in the world cup. Brooking is still one of the sharpest football brains around. Wasted in a blazer. Although he wears one better than most.

Lovely bloke. Came over to us for a chat in a park in Amsterdam, 2 days after Charleroi riots in Euro 2000. Charming, and gave us his Daily Express.

He’s the nice old uncle you see once a year but still gives you the most cash at Xmas.

His time managing West Ham shouldn’t be forgotten either.

I have a cloudy memory of him on co-comms with Motson on LFC v Basel. When Motson brought up the many pronunciations of the Swiss side he said it was, “like West Ham, isntbit? Some call them ‘West Ham’ but others call them WEST ‘AMMMMMM”

He’s like a genial uncle who regales you with tales of what seem like a bygone age but is, in reality, only 20 odd years ago. His voice is comforting, like chicken soup.

He came across really well in the recent John Motson documentary. He had real affection for Motty

Slightly bias as a West Ham fan but he just oozes class. Always seems calm and collective too. Would love to see him back on mainstream TV again.

The standard bearer of pipe and slippers co-commentary. The trademark “welllllll” – a vital component of the Brooking broadcasting toolkit. “Trevor Brooking is in the Sappora Bowl.What’s it like, Trevor?” “Wellllllll, it’s a bowl shape, Gary.”

His genial early 90s MOTD punditry belied a rock solid commitment to improve the English game from the bottom upwards. One FA employee we actually like and care about.

Really miss Trev on the co-commentary and on the box in general. Really measured and insightful and always managed to get in a mention for “my old club, West Ham” wherever possible. Comes across as a true gent.

Seems like a total gent and one of the few FA employees who we should listen to.

Future Days
Seems to still have an good appetite for his work at the FA and for football in general. His work on 5live during the World Cup was very good, especially during the England game.

While England had the lead against Croatia for 68 minutes, from the start of the second half, Trevor was warning about our lack of possession, immediately saying that we needed to retain the ball better or Croatia would come back into it. He identified our midfield as getting overrun and needing beefing up. While others were delighted to have got to half way in the second period still ahead, his warning was soon to be all too prophetic. He still had the vision.

It was a reminder that football media needs its elder statesmen as well as youthful, new energetic bunnies. Trevor’s wealth of knowledge about football isn’t to be dismissed lightly and so hopefully, there will be regular spot for him in the studio for discussion programmes and on co-comms too in the coming season so that once again, we can enjoy that famous “…wwweeelll”.