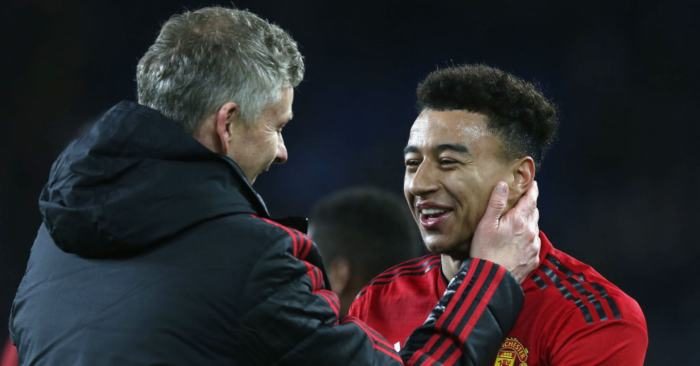 Diogo Dalot wants a word
Look I think enough is enough we will do nothing with Young in the squad, so here is a suggestion why not for the last few games play Lingard there as a wing back

We won’t have to watch Young cross

Young is already suspended for West ham so come on Ole give it a shot.
Timi, MUFC

Data-driven approach to improving refs
There have been a lot of letters about VAR and Refs recently – hurting the game or not good enough, etc. Sure, VAR is still somewhat alien to football but there are other sports using VAR and other ways to improve decision making from which football could learn.

The NBA invested $50M in building their ‘Replay Centre’ a centralized place to provide the equivalent of VAR for games. The ref makes a twirling finger sign to say, tell me if a foul was committed, etc. (Similar to Rugby.) This by itself isn’t the interesting fact but the way they have used all the game data to improve on referee performance. They provide every ref a list of their ‘errors’ as well as to the teams. so no hiding. It has been shown to improve performance. They have even shown there was bias several years back to home teams and even by colour. Which has dramatically improved with the data feedback.

The overarching sense is that even before this, the quality of refereeing was better than, say, 25 years ago. Its just that with so much technology and the viral nature of media today, that any perceived injustice is jumped on. Plus, it was shown that when players, especially the top players, berate referees as it has a direct impact on fans intolerance towards referees.

The point of all this? Well, hopefully football takes this beyond VAR and tracks stats to improve referee decision making. After all, we do it help players perform better. Refs are better trained today and are provided feedback, but as with all things, a more data driven approach to error prevention would have much greater impact.
Paul McDevitt

Arsenal are progressing
Ian Watson gives a good account of Arsenal’s abilities when we have certain players available to do the jobs assigned to them.

However, when the point about there being such a significant contrast between their away and home form compared to close rivals is brought to attention repeatedly I really don’t think that is the case.. or maybe that there is such a huge gap to close.

For example, considering the Premiership, only Liverpool and Citeh have lost less away games (1 and 3) whereas Arsenal, Spuds, Chavs, ManYoo have all lost 6 (along with others) which shows that there is not a lot in it amongst them. Arsenal were appalling against Everton but should have picked up more points away against the Chavs, Spuds, ManYoo for example. I know people can argue that we could have dropped points in other games such as Wolves at home but that’s the thin line. Therefore, I do feel Arsenal are progressing.

Also, it goes to show the consistency Liverpool have shown this season regarding lack of defeats. Once again, however well they have performed throughout the season, will they get there? Such a thin line !
Chris, Croydon

Driven insane by Insigne
I think the coaches at Napoli need to explain the offside rule to Insigne. He’s making this arsenal defence look like the Tony Adams variant at its best. Offside trap after offside trap. We all know they’re clearly not that. Other than that, 20 minutes to go and Arsenal have made Napoli look really poor. I thought this would have been a tough game but obviously not.
Rob, Gravesend

Give me Son
A few weeks ago I watched Son’s run of incredible form in Kane’s absence and thought “what a player”. And then he did it again immediately in the CL QF the other night. The guy just always seems to find an extra level at exactly the time when Spurs need someone to step up – how is every top CL boss not drawing up plans for prising him away?

I wouldn’t necessarily drop any of our front 3 for him but he is the one player I covet – more than Hazard or Sterling or
De Bruyne.

I’d be interested which one player other MBers would covet – apart from the obvious.
Aussie Red

Guardiola the greatest
Majority of people only knew Guardiola when he started coaching FC Barcelona first team. Those who are true Barcelona fans, like myself, know of the work he did in the B team. The work that made him get the Barcelona job.

The B team, just like Barcelona’s first team, was in shambles…in decline. They were relegated to the third tier of football in Spain. Guardiola changed that when he came in.

It was there his obsession with playing the perfect game began. For those who didn’t know, due to the work he put in and the style the team played, they got promoted to the second tier.(This is for the dude who said he couldn’t lead Cardiff to the premier league)
It was here he also unearthed gems like Pedro, busquet, Cuenca (rem him), etc.

Guardiola is the best because of what he brings to a club, no matter the stature.
In the Barcelona B team, he created an identity (take the ball, pass the ball). In the first team he created one of the greatest (if not the greatest) footballing sides ever. At Bayern he made them an unstoppable force in the league. (Yeah he didn’t win the UCL, and people say its Bayern. But their football was glorious). At Man City he is making everyone who says he can’t win the premier league with his brand of football look like a fool.

Would Messi have been the footballer he is today without Guardiola? NO!
Look back, Messi became the goat from the day he switched to false nine (against Madrid). Guardiola switched him to that position. Don’t get me wrong, Messi would still have been great, but not like this.

Guardiola has remain at the top of the game because he has been nothing short of brilliant. Barcelona can look back from 2009 with great pride because of Guardiola. Man City will do the same too because of him.
Nelson, Lagos

UEFA get it wrong again
For the last two evenings of UEFA coverage there have been the footballcan ads, which are promoting women’s football. In itself that is laudable however demonstrates a governing body, as always, missing the bigger picture.

Would it have been that big a shift that some of the girls were from a different ethnic background or had a disability? Instead all the girls are white, with no diversity represented at all. Maybe the ad wouldn’t play so well in some parts of the world with a bit of diversity but with the greatest respect maybe that is even more reason for UEFA to do it.

It is wholly possible that I am an over sensitive tw*t, need to get a life and let the women’s game be promoted in peace. However for me the above stood out immediately and feel it is an open goal UEFA should not be missing in this day and age.
Parmjeet, Gravesend

Away goal gripe
Apologies but I need to get off my chest the standard of punditry on BT sports. After listening to Wednesday nights nonsense I now hear, for the umpteenth time, the fact that Chelsea have an “important away goal”. I’m sorry, but there is literally no two leg result that can be decided by the away goal in a 1-0 win. 2-1 win or defeat, yep it might matter. 1-0. Nope, not never.
End of rant
John, Isle of Man

Next goal wins
Seeing the tweet that Adam (Waiting for Maxim Tsigalko to get signed), Birmingham mentioned (Australia 31-0 American Samoa) just thought I’d highlight a documentary which starts at that very moment: Next Goal Wins.

From the Wikipedia article: In 2001, American Samoa lost 31–0 to Australia, the worst loss in international football history, and have been dogged by defeat ever since. They want to qualify for the 2014 FIFA World Cup, but continue to lose on the pitch. To help turn their luck around, the Football Federation American Samoa hire Dutch-born, America-based coach Thomas Rongen.

Incredibly moving, with some truly amazing people, from the GK who played in that historic loss, to the Coach motivating them, to Jaiyah, the first Fa’afafine player to compete in a men’s World Cup qualifier.

It’s a reminder to be decent, to treat people with respect, and to never give up hope.
Luke, (I had something in my eye at the end, alright) THFC, London

Red mist
So Steve, Los Angeles thinks Harry Kane should have received a rad card for simulation in the match against City.

I didn’t watch the game, and haven’t seen the incident since so I won’t comment other than to say when the f**k has anyone received a red card for simulation?
Adam, LFC, Lancaster.

Prompted by the Geezers
Football Manager is a powerful thing indeed. That match reports from a simulated league, being played by someone else ‘from’ 18 years ago can make for essential reading is, frankly, madness.

But there you have it guess, the genius of the FM gaming franchise.

I’ve been an on and off player, and not on a proper computer for a long while. I’m happy to anaesthetise my daily commute with the mobile version.

I’ve never played under my real name. Oddly I’ve always felt I’ve needed a pseudonym, and then extra-oddly, I’ve adopted that character while I play, always including bad, stereotypical accents. This type of behaviour invades absolutely no other area of my life. Sometimes, right after I’ve stopped playing when a transfer window is open, and I’ve left the train and am walking to the office, I conduct in my head press conferences about signings and sales. In whatever accent is right for the current incarnation of my football managerial fantasy.

I always go with characters from movies, and I always start at Bordeaux because… no idea. I’ve been doing it so long the root of the cause is long forgotten.

Right now I’m working through the characters from Tropic Thunder. So I’m Jeff Portnoy, a brash American taking Europe by storm. I have Valencia top of the league but with a team of horrible mercenaries always needing pay rises.

I did once try to be Jaffe Joffer but as Zamunda is not a real country I was unable to. Take a second on that: I didn’t play as a fake character in a simulated game because a make believe country was unavailable to me.

I’ve got to wondering what names other might have for themselves, what club they start with and why.