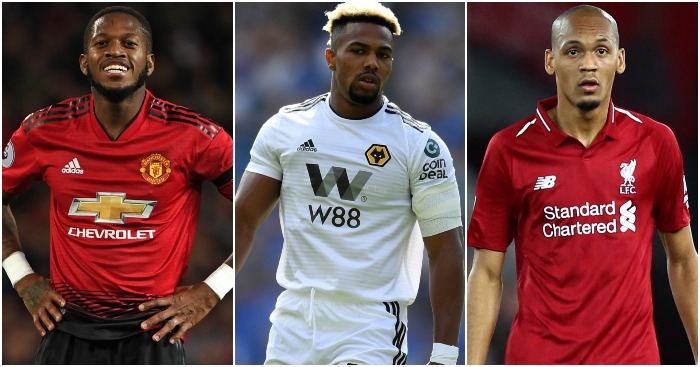 This XI is made up of players who moved for over £10million in the summer but have since started fewer than half of their team’s Premier League matches. They’ll be playing 4-2-3-1…

GK: Danny Ward (Leicester)
It was a close-run thing between Ward and Angus Gunn, but at least you could see Gunn’s logic in thinking he might get a game at Southampton sooner rather than later. He just wasn’t expecting Alex McCarthy to channel the spirit of Peter Shilton and get himself in the England team. Still, it was probably McCarthy’s turn…

Ward, though, presumably signed for Leicester on the assumption Kasper Schmeichel would be on his way. Instead, the Denmark No.1 signed a new five-year deal at the King Power. All the while Ward watches from the bench as the 25-year-old waits for the third Premier League appearance of his career.

RB: Fabinho (Liverpool)
Being the good egg he is, the Brazil international is doing a job for us at right-back given there are no other options. It is that kind of versatility that tempted Jurgen Klopp to chuck £43million at Monaco at the start of the summer, but it took over two months for the Liverpool manager to allow Fabinho anywhere near his Premier League XI.

Plenty like this has been written on these pages about the weirdness of Fabinho’s situation, much to some Liverpool fans’ fury. There have been reports recently that he could be on his way as early as January, just as he started to get some game time. The 25-year-old played 90 minutes in the league on three consecutive occasions prior to returning to the bench at Watford on Saturday. However you spin it, it cannot be claimed that the move has worked out as all parties expected.

CB: Caglar Soyuncu (Leicester)
The Turkey international was one of three centre-backs signed by Leicester but with the Foxes keeping hold of Harry Maguire and appearing reluctant to move on from Wes Morgan, £19million Soyuncu has been kept on the sidelines. Not that he really seized his chances to impress in the Under-23s.

It wasn’t until the end of October that Soyuncu was seen in the Foxes’ first team, with his Premier League debut coming against West Ham, who made it more comfortable for the new boy by playing most of the match with ten men. Soyuncu has played a single minute in the three matches since.

CB: Jannik Vestergaard (Southampton)
The Denmark defender went straight into the Southampton team at the start of the season following his move from Borussia Monchengladbach in the summer, playing five of their opening six Premier League matches. But Vestergaard hasn’t been seen since the 2-0 defeat at Wolves two months ago.

“It’s disappointing and frustrating that I’ve been out for a few weeks now,” said the £18million recruit and it’s hardly like Mark Hughes’ side have looked solid in his absence. Saints have shipped ten goals in their last three games.

LB: Diego Rico (Bournemouth)
The left-back joined Bournemouth for £10.7million from Leganes but Rico was forced to sit out the opening couple of games of the season after getting himself sent off during his farewell appearance in Spain. Eddie Howe fought off competition from Borussia Dortmund to sign the 25-year-old and Rico was given three starts when he became available, but he was swiftly sat back down on the sidelines.

Rico watched from the bench for four games but the defender hasn’t even made Howe’s squad for the last three games – all of which have ended in defeat. Coincidence? Well, yeah.

DM: Fred (Man Utd)
There are reports this morning that Jose Mourinho wanted Axel Witsel in the summer when he was on his way back to Europe from China but Ed Woodward, using all the transfer expertise he acquired during his career as a chartered accountant, decided that spluffing almost three times the fee Borussia Dortmund paid for Witsel on Fred on the basis he was younger would be a far more savvy investment.

The former Shakhtar Donetsk midfielder has started six of United’s 13 Premier League matches and based on the evidence so far, it has been almost impossible to draw many conclusions. Fred deserves patience, like any South American joining the Premier League, but Mourinho really could have done with a player closer to the finished article.

DM: Yves Bissouma (Brighton)
After his 31-minute cameo on the opening day, the Brighton new boy was compared to Paul Pogba by the Premier League’s official website. Which seems harsh. Bissouma seemed to do okay at Watford…

The 22-year-old Mali midfielder started four of Brighton’s next six games but his involvement in the following five matches came as a substitute. Against Leicester on Saturday, he didn’t make it off the bench. The Seagulls spent a sum of up to £17million in Bissouma when he joined from Lille and they are clearly allowing their investment to grow at his own pace.

LW: Adama Traore (Wolves)
The Wolves record signing gets the nod because his name is a sight easier to spell than the Iranian lad who was Brighton’s record buy in July but has spent most of the season on the bench.

Similarly, Traore has been consigned to a substitute’s role for all but one of his 12 Wolves appearances, with the former Barcelona and Middlesbrough flier managing more than an hour on only one occasion. Which is a shame, because he’s bloody brilliant to watch. We can’t remember a player who made running into dead ends look quite so exciting.

RW: Mohamed Elyounoussi (Southampton)
It cost Southampton around £16million to get the left-winger from Basel but Elyounoussi has been an inconsistent presence in Hughes’ team during his maiden season in the Premier League.

In the brief time the 24-year-old has had on the pitch, Elyounoussi has struggled to make a tangible impression. The Norwegian has yet to contribute directly to a goal in 540 minutes’ worth of Premier League, with six appearances coming from the start. Only once, though, has Elyounoussi completed 90 minutes.

SS: Rachid Ghezzal (Leicester)
The winger, who played in a second striker role at Burnley before the international break, had some big shoes to fill when he arrived for around £10million to replace compatriot Riyad Mahrez, who departed for six times that figure to Manchester City. It was a huge ask of a player who, by his own admission, was “coming off of an average season with Monaco” but Leicester would still have been hoping for a greater return than just a single goal.

“I’m aware that I can still do a lot better and carry a lot more influence to help the team,” said the 26-year-old after his early Leicester form cost him his Algeria place. An assist might be nice.

CF: Matej Vydra (Burnley)
Last season’s Championship top scorer has had precious little opportunity to show what he can do in the Premier League since his £11million move from Derby to Turf Moor in the summer. Vydra has netted once on one of his three starts, but four of the last five games have been spent on the bench.

That might be more understandable had Burnley been playing well and scoring goals. But they’re doing neither. Those five matches have produced four defeats, one draw and only three goals. Even when the Clarets were chasing the game almost from the off against Newcastle on Monday night, Vydra was restricted to a watching brief.