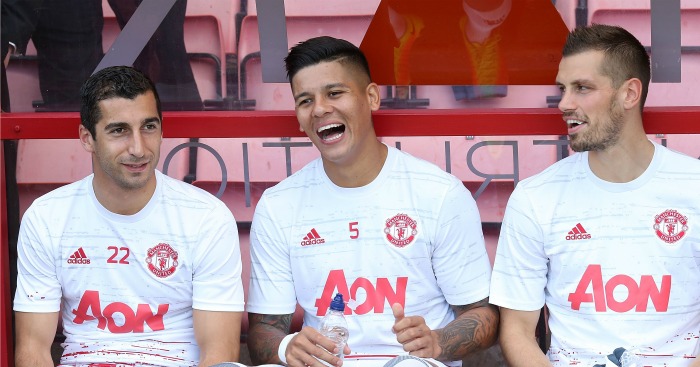 The rules are simple. To qualify for this XI:

* You must have played at least one minute of Premier League football this season, but any game time can only have come as a substitute. Any players who have started one match or more are disqualified.

* Only one player from each club is allowed. Apologies go to Michael Carrick, Morgan Schneiderlin, Memphis Depay and Olivier Giroud.

GOALKEEPER: Erm…
So, you thought of an idea and compiled a list of outfield players before realising that no goalkeeper fit the criteria but ploughed on anyway like a reckless Charlie Adam slide tackle.

So, no goalkeeper has made a substitute appearance without starting a Premier League game this season. It’s quite obvious really, considering one would either have to play particularly poorly, get sent off or suffer an injury to be replaced. As a result, we have no choice but to hand the honours of leading this side to Darren Randolph. Why? Shut up. That’s why.

RIGHT-BACK: Jon Flanagan (two sub apps)
When he packed his bags, received one final bear hug from Jurgen Klopp and slowly shuffled through the gates of Anfield to head to Lancashire in the summer, Jon Flanagan probably expected a little more. His destination was Burnley, with the newly-promoted side promising far more opportunities of first-team football than at Liverpool. This was simply part of the full-back’s rehabilitation from injury; he would return more experienced than ever.

Unfortunately for the 23-year-old, it is not a theory Sean Dyche has bought into thus far. Flanagan has been afforded seven minutes in the Premier League where he completed all six of his passes against Everton. And if that is not enough to convince his temporary manager he deserves a start, he might as well give up.

CENTRE-BACK: Marcos Rojo (one sub app)
Described as “phenomenal” in the EFL Cup victory over Manchester City by his manager, Marcos Rojo would be forgiven for believing that his Premier League exile is over. Injuries to Eric Bailly and Chris Smalling forced Jose Mourinho’s hand on Wednesday, but Rojo responded with an accomplished performance at Old Trafford. Despite making three Europa League appearances and two in the EFL Cup, the Argentinean has found game time in the league more difficult to come by. His 38 minutes so far all came in the 4-0 defeat to Chelsea, with United already 2-0 down when he was introduced for Bailly in the second half. Yeah, cheers boss.

CENTRE-BACK: Marc Muniesa (one sub app)
“I feel proud, but I feel shy as well,” Marc Muniesa said in February when asked how he feels about Stoke fans chanting his name during matches. “I watch a game on TV and hear my name and I don’t like it because I’m not there.”

Unfortunately for the defender, it is something he has had to acclimatise to. His poor form in the latter half of last season has seen him relegated to the periphery of the Stoke squad, with his last Premier League start coming in April. He was given 15 minutes to impress in the 2-0 victory over Sunderland earlier this month, but that represents the only time Mark Hughes has trusted him outside of the second round of the EFL Cup and the entirety of the EFL Trophy. Somehow, he isn’t even the most high-profile Stoke player that has been relegated to playing in the third tier competition this season.

LEFT-BACK: Kieran Gibbs (three sub apps)
Having made his debut in 2007, one would expect Kieran Gibbs to have made more than 129 appearances in the Premier League. But such is the life of the back-up left-back, a player who will show commitment to the cause when called upon, but who is not quite good enough to be a first-team regular. Nacho Monreal has forced Gibbs to take a seat on the bench all too often over the past few years, and this season is no different. The 27-year-old has not started in the league, but has made three substitute appearances, each of them coming late in the second half of victories over Watford, Chelsea and Swansea.

CENTRAL MIDFIELDER: Fabian Delph (two sub apps)
As our famous World Cup 2018 England ladder noted, Fabian Delph is ‘a player whose very existence is incredibly easy to forget’. It is a point which rings true for both country and club. The midfielder, whose name, at this stage of his career, must now be followed by the words ‘muscle injury’ in brackets, is often overlooked in the revolutions of Messrs Guardiola and Southgate. It is, quite frankly, an injustice; how could anyone forget his virtuoso 26-minute performance against Sunderland on the opening day, or the remarkable two minutes he spent on the pitch in the 4-1 win over Stoke?

CENTRAL MIDFIELDER: Mathieu Flamini (two sub apps)
No-one should be especially surprised that Mathieu Flamini has only played twice in the Premier League for new club Crystal Palace this season, both occasions coming as a substitute. The Frenchman is busy trying to take over the world, you see. He can’t be wasting his time in an Alan Pardew midfield.

CENTRAL MIDFIELDER: Harry Winks (two sub apps)
The 20-year-old missed a trick when he didn’t take the shirt number ’40’, didn’t he? One of a number of youngsters Mauricio Pochettino has gradually fed into the Tottenham first team, Winks, along with Josh Onomah and Cameron Carter-Vickers (but not Tom Carroll, because he’s twenty-bloody-four), is hoping to go one further than Ryan Mason and Nabil Bentaleb, and complete the transition from academy graduate to first teamer. He played well against Liverpool in the EFL Cup, but the most impressive thing about his five minutes of Premier League football is that it has come across two appearances.

RIGHT FORWARD: Divock Origi (seven sub apps)
Spare a thought for Divock Origi, who has been lost among the Liverpool striker conundrum. Daniel Sturridge dominates the headlines as he battles Roberto Firmino, Sadio Mane and Philippe Coutinho for an attacking role under Jurgen Klopp. But what of Origi, who scored ten goals in 33 games last season, only 15 of which were starts? The Belgian has had to feed off the scraps Klopp is sneaking under the table, with all seven of his Premier League appearances coming from the bench. No player has been introduced as a substitute more often.

STRIKER: Leonardo Ulloa (five sub apps)
If Leonardo Ulloa was being honest, he cannot claim to have expected things to be any different. The Argentinean made more appearances as a substitute than any other player last season (22) as he emerged as Leicester’s rather potent Plan B. The champions signed Islam Slimani and Ahmed Musa – each for club-record fees – retained Jamie Vardy and Shinji Okazaki, and kept Ulloa’s seat on the bench warm for him. With five appearances as a substitute in nine games, the forward is on course to equal his delightful record from last season.

LEFT FORWARD: Michy Batshuayi (six sub apps)
In terms of goals per minute, no player has a better record in the Premier League this season. But that is unlikely to placate Michy Batshuayi, who was purchased by Chelsea for £33million this summer, but has played permanent second fiddle to Diego Costa.

In his 65 minutes, which have been spread across six games, Batshuayi has scored once – in the 2-1 win over Watford. He also has an assist. The 23-year-old can probably feel a little aggrieved at his current standing in the squad.