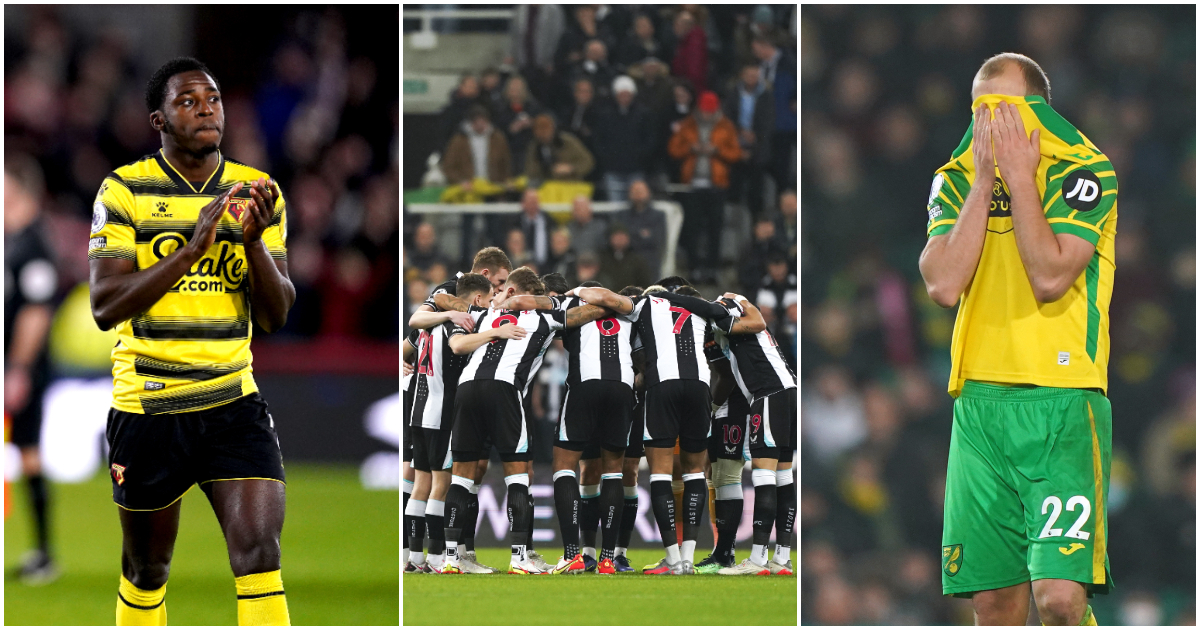 Exactly what it says on the tin: a reason to be cheerful and a reason to be fearful for all the relegation candidates, which we’ve arbitrarily defined as ‘within 10 points of the bottom three’ so that’s good news for Villa but bad news for Southampton.

Southampton (19 played, 21 points)
Reason to be cheerful: Their first-half form. Everyone loves a league table that isn’t the real league table and Southampton find themselves a single point off a Champions League place in the first-half Premier League table. Like the kid that sprints the start of the cross country, Ralph Hasenhuttl has primed his players to start matches firmly on the front foot and even with their fondness for taking aim at their own feet there surely remain plenty more than three teams worse.

Reason to be fearful: Despite everything, football matches are still 90 minutes long. There have been a number of suggestions made to deal with the rapid spread of omicron, including a circuit breaker and an increase of substitutions. Unfortunately for Southampton, the introduction of 45-minute matches doesn’t seem to have progressed any further than their own fan forums. Expect them to add to the eight leads they have lost in the second half of the season.

Everton (18 played, 19 points)
Reason to be cheerful: A quieter treatment room. Footballers often say how lonely it can feel when you suffer a long-term injury, but there has been plenty of company for the various injured Everton players so far this season. Cheese and wine gatherings do, however, finally look to be becoming more low-key affairs in the Everton treatment room. The return of Dominic Calvert-Lewin will be a particular boost in the second half of the season, even if his return was sub-optimal.

Reason to be fearful: The mood. Hiring Rafael Benitez was always going to be a big risk and, as expected, he is back to being a Fat Spanish Waiter to a significant proportion of the Everton fanbase. The general mood at the club will dictate whether Goodison Park is the ‘tough place to go’ that it is regularly billed as or the football version of Twitter that it has recently become.

Leeds (19 played, 19 points)
Reason to be cheerful: Marcelo Bielsa. Pundits that have been desperate for Leeds’ form to take a downturn to justify previously writing him off have enjoyed the first half of the season. Haven’t they, Stan? But Leeds will continue to trust their style of football and they should be rewarded when their key players return from injury.

Reason to be fearful: A lack of goals. Wolves have shown this doesn’t have to sentence you to a relegation battle, but Leeds haven’t got a strong enough defence to cope with a shortage of goals. Raphinha is doing his best to be the kid in the playground single-handedly taking on the opposition, but he will need some help from Patrick Bamford and Rodrigo in the second half of the season or Leeds could be in real trouble.

Watford (18 played, 13 points)
Reason to be cheerful: Ranieri has form. Compared to the Leicester miracle, keeping Watford in the league would be pretty low-key. Ranieri has attacking players that can be his Vardy and Mahrez in Sarr and Dennis. Signing a Kante in January would be pretty handy as Tom Cleverley doesn’t quite have the dynamism of old.

Reason to be fearful: Ranieri has form. Obviously, Watford will win the Premier League in the 22/23 season if they stay up but that is starting to look more and more unlikely. Fulham were also hoping he would ‘do a Leicester’ in the 2018/19 season and his Watford team resembles that side more than his title winners with a disorganised defence and midfield lacking any real balance.

Burnley (17 played, 11 points)
Reason to be cheerful: They have the T-shirt. The days of our favourite relegation fire-fighters thankfully seem to be behind us, but in Sean Dyche Burnley have a manager made for a battle. What Burnley lack in quality they make up for in organisation and team spirit, which could prove vital against some of their more inconsistent fellow strugglers.

Reason to be fearful: Turf Moor isn’t a fortress. It may be considered the current version of a cold away day in Stoke, but Burnley away hasn’t been a difficult hurdle to overcome for a number of years now. They will need to add a number of home wins to the frankly embarrassing one they have had so far to have any chance of surviving.

Newcastle (19 played, 11 points)
Reason to be cheerful: Wonga. That word sums up the change in regime more than any other. Ashley’s Newcastle relied on the sponsorship of a dodgy payday loan company whereas these lovely new owners have more wonga than any team in the world. If they can convince enough players that they can survive this season and then lay foundations for future success, they can buy their way out of trouble.

Reason to be fearful: Money doesn’t always buy success. Let’s be honest, it helps, but Newcastle are not in a position to buy players that are a guarantee of immediate success. Kieran Trippier would be a great start, but they are weak in every area. Even the players that are good enough are injured. Good luck, Nick Hammond.

Norwich (19 played, 10 points)
Reason to be cheerful: They are within touching distance. Not an easy one this, with Delia Smith’s unique motivational techniques a close second. Despite having a frankly pathetic 10 points, a couple of wins would take Norwich out of the relegation zone. Writing that is significantly easier than either D Smith masterminding said two wins, however.

Reason to be fearful: Lack of quality. It seems that Daniel Farke wasn’t the problem after all. Norwich have some players that may flourish in an established Premier League team, but the squad overall quite simply isn’t good enough. They don’t have an investment company absolutely not affiliated with a nation state to back them in the transfer market either unfortunately.