Home Mediawatch A reminder: Arsenal DID actually win on Monday 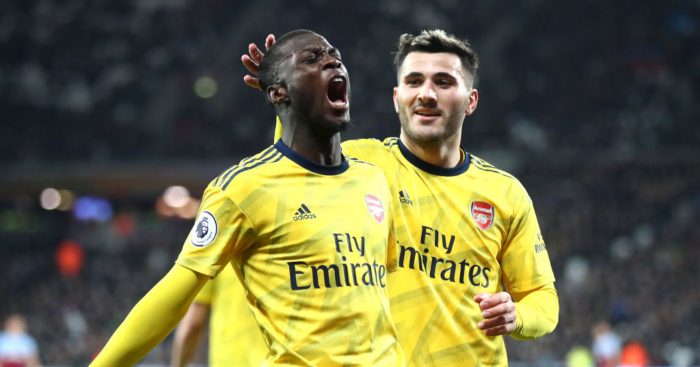 Firstly, Mediawatch is always amused by any scoffing reference to a ‘some kind of Apprentice-style process’, as if the very idea of interviewing and identifying a key appointment is laughable. They interviewed them? With a panel? Fools!

Because of course Manchester United’s method of allowing the outgoing manager to simply choose his successor is definitely the blueprint all football clubs should follow.

‘Of course, they could still scrape into Uefa’s top club competition by winning the Europa League next May.

‘But come on, let’s be serious.

‘They are more likely to miss out on European competition for the first time in 25 years, costing them another £30m.’

You know how many teams lie between Arsenal and a likely Europa League place? Two.

You know how many points lie between Arsenal and a likely Europa League place? One.

Nobody is pretending that everything at Arsenal is rosy but they are literally one point behind Tottenham and two behind Manchester United. Oh and they won on Monday night. That seems important in a match report from a game on Monday night.

‘Somehow, Arsenal are the ninth-best team in Europe according to Uefa rankings.’

Somehow, Uefa have decided on an algorithm that calculates European success over five years (three Champions League knock-out stages, one Europa League final and one Europa League semi-final) rather than simply use The Mark Irwin Scale of Shitness.

‘The Premier League table, though, tells a completely different story, with Ljungberg’s team arriving at the London Stadium in the bottom half and just four points above the drop zone.’

And THEN THEY WON. You miserable sod.

Theory of relativity
Elsewhere in The Sun, we are told that ‘United’s threadbare squad sits just five points off the top four’.

Which means that Arsenal’s squad lies just seven points off the top four. It doesn’t sound like an awful lot more.

Were you watching the same game?
John Cross, Daily Mirror, on Granit Xhaka: ‘Arsenal are generally better with him (honest). Solid, mostly.’

Sami Mokbel, Daily Mail, on Grani Xhaka: ‘Gave away possession time and again. Arsenal will listen to offers next month. No wonder.’

Team Mokbel, by the way.

Money, money, money
Mediawatch is amused by Charlie Wyett’s Sun piece on Erling Haaland, written as if he and the readers are only just discovering this teenage sensation who is brilliant at association football.

We learn that Haaland ‘is the son of former Elland Road star Alf-Inge’ and that ‘remarkably, he has so far scored in ALL of Salzburg’s Group E matches’, both of which have blown our minds.

He also writes that he is ‘a target only for clubs with the deepest pockets’ and that he ‘could cost at least £80million’.

Which means that Wyett might well be the only man (loosely) in football who has never heard of Haaland’s release clause. His colleagues at The Sun certainly have.

Rodgers’ that
The words themselves are overblown, but how many people at the Daily Mail read the opening paragraph of Ian Herbert’s fawning piece about Brendan Rodgers without once asking ‘what the hell is that apostrophe for?’.

‘YOU needed to be there, in the Liverpool media conference room, on a June afternoon seven years ago, to witness the way Brendan Rodgers’ gets to the soul of a new place and lifts it.’

Confectionary
But back to the content, with Ian Herbert lauding Brendan Rodgers (no apostrophe) for creating ‘an effortless elision of his future and the club’s rich past’ at his unveiling as Liverpool manager in 2012. Remember that word ‘effortless’.

‘The reference to his becoming the club’s second Northern Irish manager – as if the name of John McKenna, Liverpool’s first, should be assumed knowledge – was as deft as the way he drew a common identity around the city and his ‘roots back home’ in Carnlough, on the Antrim coast.’

What a charmer. ‘Effortless’ and ‘deft’ in his use of language.

So presumably it was a different Ian Herbert (it wasn’t) that wrote this in 2015:

‘The general indifference towards Rodgers, and the haste to demand he be gone, seems to have its roots in the accurate b*****t meter on Merseyside. Rodgers talks a very good game but his oratory seems confected at the best of times.

‘The smile, brilliant as the white teeth, is too sunny. The familiar little aphorisms – “all part of the dance” and “wear the crown” – do not sound as casual as he seems to think.”

It’s amazing how ‘confected’ can become ‘effortless’ in the hindsight of a run of Leicester victories.

Kyling me softly
Meanwhile, at the Liverpool Echo:

Yes, the player Liverpool absolutely will not buy (Jurgen Klopp has made that clear) is reported to be eyeing a move from PSG. Probably to Real Madrid.

Desire
Rafa Benitez was asked by Jamie Carragher on Sky Sports if he would be interested in the Everton job. He absolutely ruled out that prospect until the end of his contract in China but said:

“Obviously we are closer to Liverpool, that is fine. But I am a professional, so in the future you never know.

You can watch his comments here:

He’s basically got a lob on.