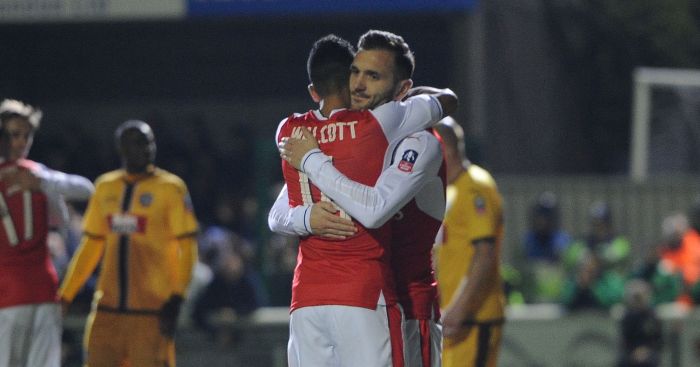 This time last year we chose the ten best uncapped Premier League players, but like a tired Spinal Tap metaphor, we’re turning it up to an XI. And the word ‘best’ is nowhere to be seen…

Goalkeeper: Willy Caballero (Manchester City)
There was competition from Joel Robles and Loris Karius, but it could only be Caballero for the team. We are in the weird situation whereby the No. 1 goalkeeper for one of the richest clubs in the world has not been capped by his country, and is also behind Manchester United’s No. 2 in the pecking order. Caballero is hardly likely to get the nod now, either.

Centre-back: Craig Dawson (West Brom)
Now 26, it feels like Dawson has been around forever. He moved to West Brom in 2010 from Rochdale, and got the last of his 15 caps for the England Under-21 team in 2013. Solid as a rock under Tony Pulis and with a lovely habit of scoring goals, Dawson must have come close to Southgate’s squad for Germany and Lithuania. The alternatives were Scott Dann, James Tomkins, Nathan Ake and Gabriel Paulista. For the position that is, not Southgate’s squad.

Centre-back: Steve Cook (Bournemouth)
Never let it be said that I am not a parody of a man. A man who has a problem where I get obsessed about individual players. Like Romelu Lukaku, Christian Eriksen, Nathan Redmond and Steve Cook. The obsession stems from players not receiving the credit I believe they deserve (as if I am the arbiter on such matters), and none fits that description (again, in my eyes) more than Cook. He’s 25, he never gets mentioned for a big move and I love him. Deal with it.

Centre-back: Ben Gibson (Middlesbrough)
While the accusation that England have a dearth of central defenders still holds some resonance, it has been an excellent season for that position. Michael Keane was called up to England’s squad by Gareth Southgate and performed well on debut, but it could easily have been Gibson and his time will surely come. He’s reportedly wanted by Chelsea and Manchester City, which might speed up the process.

Right wing-back: Michael Antonio (West Ham)
I genuinely had to check that Antonio hadn’t got an England cap yet, but he was an unused substitute under Sam Allardyce against Slovakia and withdrew from this squad with a hamstring injury. West Ham fans will scream about playing Antonio out of position, but to that I have two answers: 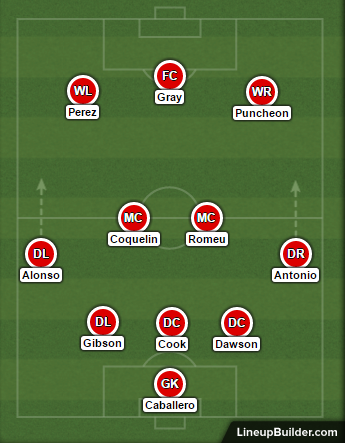 Left wing-back: Marcos Alonso (Chelsea)
The best player in this team? Perhaps. The only one that will win the Premier League this season? Almost certainly. Alonso is now reportedly wanted by boyhood club Real Madrid this summer, but has still not received a call-up to Spain’s national team. In fact, the 26-year-old’s only international experience came in two caps for the Under-19 team in 2009. That’s what playing for Bolton, Sunderland and then outside of Spain will do for you. Well, that and Jordi Alba.

Central midfielder: Francis Coquelin (Arsenal)
Included ahead of Harry Winks, Jack Cork, Tom Davies, Fernando, Giannelli Imbula and Andrew Surman, Coquelin’s status at Arsenal guarantees himself a place. At no point did I claim that this was the list of best players, but it really is a bit mad that Arsene Wenger has given 134 appearances to a central midfielder who France have never even shown a sniff of calling up. And nor should they have.

Central midfielder: Oriol Romeu (Southampton)
Yeah, I’ve gone combative with this central midfield. Having failed in his attempt to forge a career at the very highest level at Chelsea, Romeu was loaned out to Valencia and Stuttgart before eventually being sold to Southampton. It has turned into a(nother) wonderful bit of business, with Romeu improving perhaps more than any other Premier League player over the last two years (yes, that’s a sweeping statement). Having gained five or more caps at Under-17, Under-19, Under-20, Under-21 and Under-23 level, does he need another big move to force his way into the senior squad? At 25, there is still time.

Wide right: Jason Puncheon (Crystal Palace)
I think Puncheon is alright, good even. But Sarah Winterburn has a little shrine to him in the corner of the office, and a little poem titled ‘Puncheon above his weight’ that she recites every Friday afternoon. It’s sweet really, although he has told her to stop calling. A few times. Anyway, with Antonio in at right wing-back you need a worker as the wide forward, and the two can dovetail beautifully in all those hypothetical matches.

Wide left: Lucas Perez (Arsenal)
“He’s not only a goalscorer, he’s a guy who combines well with partners, who can give a final ball and makes good runs,” said Wenger last August. “He’s got a good eye for goal and had an outstanding season last year.” He’s also 28, cost £17m, has been given 265 minutes of Premier League football and, crucially, has never been capped by Spain. Another resounding success.

Striker: Andre Gray (Burnley)
Level at 6-6 with Troy Deeney for non-penalty league goals this season, and three years younger. I went with the striker who I would prefer to have at my club right now and, after some lengthy explanations to Sean Dyche about why he was having to lose his player over a light-hearted website feature, I took Gray. I know Jermain Defoe was a popular recall but, at 34, I’d have much rather seen Gray included. Isn’t it all about looking to the future?