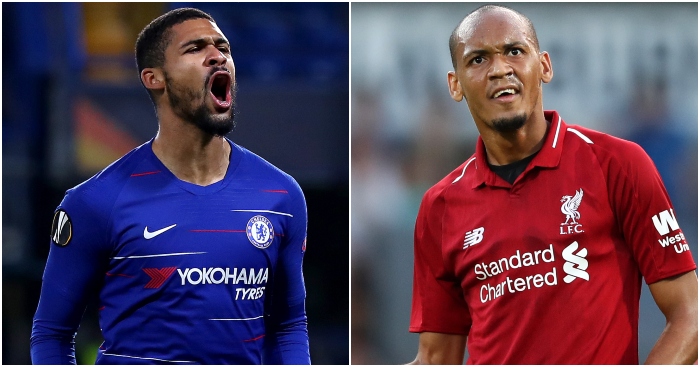 To be considered, players must have played fewer than 100 minutes in the Premier League, despite having been fit and available for the majority of the season…

GK: Vicente Guaita – o mins
We’re breaking the rules already because there none of the 25 keepers who have actually featured in the Premier League this season have played under 180 minutes. But perhaps the most unexpectedly inactive stopper is Palace’s summer recruit. Guaita signed a pre-contract agreement in February, which appears to have provoked Wayne Hennessey into getting his act together. The Wales No.1 has arguably never been in better form for Palace, leaving Guaita sat on the bench and waiting for his Premier League debut.

RB: Matteo Darmian – 90 mins
The Man Utd right-back was heavily linked with a return to Serie A in the summer, but a start in the opening game of the season may have encouraged Darmian that his Old Trafford career wasn’t finished. Since that appearance, the Italy international hasn’t seen any further Premier League action, making the bench for three away games but missing out on the matchday squad entirely otherwise. Jose Mourinho even kept him on the sidelines for the Carabao Cup defeat to Derby. January probably can’t come quick enough.

CB: Fabian Schar – 79 minutes
Mike Ashley got his hand in his pocket to spend £3million on the Switzerland centre-back but Rafa Benitez doesn’t appear to fancy him. Schar started the defeat to Chelsea in August in the absence of Jamaal Lascelles but the 26-year-old was hooked three minutes after conceding a penalty. He might not be good enough for the Premier League’s bottom side but Schar, capped 46 times, has retained his Switzerland place, playing every minute of their four games since the World Cup.

CB: Joel Matip – 93 minutes
The Liverpool centre-back picked up an injury in pre-season, ruling him out of the opener against West Ham. But Matip has seen his status slip regardless, perhaps because of his fitness concerns, while Joe Gomez’s stock has risen. The Cameroon defender was used by Jurgen Klopp to run the clock down as a late substitute in successive Premier League games against Brighton, Leicester and Spurs before getting a run out against Southampton. A goal and a clean sheet later, Matip was dispatched back to the bench, which is where he has remained ever since.

LB: Adam Masina – 96 minutes
The Italian was Javi Gracia’s joint most expensive purchase of the summer but the Hornets have bedded their £11.5million signing in very gently. Prior to starting last weekend’s impressive win at Wolves, Masina had featured for just six minutes of the 2-1 defeat to Man Utd in September. With Jose Holebas back from suspension for the visit of Huddersfield, Masina will likely find himself perched back on the bench.

CM: Adrien Silva – 88 minutes
Having waited so long to be able to play Silva last season, the Portugal international’s contribution this term has been on the slide since the opening day. The £22million midfielder started against Man Utd at Old Trafford before coming off the bench in the Foxes’ second game – the home win over Wolves. Since then, the 29-year-old has been limited to Carabao Cup action and two stints as an unused substitute.

CM: Ander Herrera – 84 minutes
The Man Utd midfielder has missed two games due to an ankle injury but much of the rest of his season has been spent on the fringes of Mourinho’s squad. Herrera was a surprise choice to play in a back-three against Spurs at Old Trafford, which did not go well, while he fared little better in his only other start – in the Carabao Cup against Derby, when he was withdrawn for Mourinho’s comfort blanket Marouane Fellaini. In the Premier League, Herrera has been limited to two substitute appearances since the Spurs catastrophe.

CM: Fabinho – 21 minutes
It’s all been a bit weird around Fabinho since he arrived at Anfield for £43.7million at the start of the summer, but Klopp always promised the Brazil international would play a part. Fabinho finally made his Premier League debut off the bench at Huddersfield last week and impressed against Red Star in midweek, when Klopp changed his side’s shape to better accommodate his new recruit. That puts him firmly in the frame for a start against Cardiff at Anfield on Saturday.

AM: Ruben Loftus-Cheek – 33 minutes
The England star hadn’t been seen in Maurizio Sarri’s Premier League squad since a couple of substitute appearances in the opening four matches, but Loftus-Cheek seized his Europa League opportunity with both hands on Thursday night. He had scored two goals in 35 Chelsea games before facing BATE, who he put three past in 53 minutes.

Now what? “We have four midfielders and three of them have the same characteristics,” explained Sarri, preparing Loftus-Cheek for the inevitable disappointment this weekend when Mateo Kovacic and Ross Barkley take precedence.

ST: Ademola Lookman – 54 minutes
Marco Silva resisted offers of £25million from RB Leipzig in the summer after the Bundesliga club were given a taste of what the England youngster can do during the second half of last season, when he contributed nine goals in 11 games on loan. But the Everton boss barely bothered to use the attacker during an inconsistent start to his Goodison Park reign. The 21-year-old was restricted to substitute roles against Huddersfield and West Ham, and it was from the bench that Lookman emerged to set up the late opener against Palace last weekend.

ST: Jermain Defoe – 13 minutes
No-one expected Bournemouth’s front three to catch fire as they have this season, not least Defoe. The 36-year-old has had to sit and watch while Joshua King, Callum Wilson and Ryan Fraser took on Liverpool’s front line for the title of the Premier League’s most deadly trio. Defoe’s best hope of some playing time may be to move in January. Otherwise, he is hoping that one of the big clubs make Bournemouth an offer they can’t refuse for King or Wilson.