Home F365 Says A successful experiment for Klopp and Liverpool 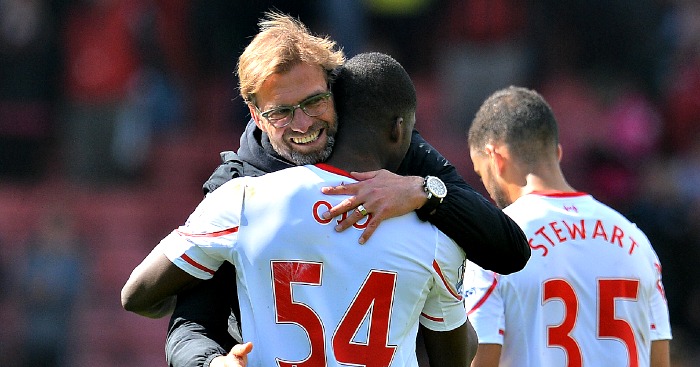 The job of a football manager is a simple thing to define. From player roles to tactics to team talks, a manager must implement, impact and impart his knowledge onto his squad to achieve one straightforward objective: Victory.

Among the numerous facets of football management is to, as the saying goes, ‘make a team greater than the sum of its parts’. Sir Alex Ferguson was a master of the art. The Scot named a starting midfield of Fabio, John O’Shea, Darron Gibson and Rafael in an FA Cup game against Arsenal in 2011. The Gunners fielded a strong side, featuring Laurent Koscielny, Jack Wilshere, Samir Nasri and Robin van Persie, but United secured a comfortable 2-0 win. How? Because the team was greater than the sum of its frankly rotten parts.

Jurgen Klopp is a football manager. Heck, he is a bloody good one. And one of his most important targets is to reach that holy grail of management. Bournemouth of 2016 are not close to the standard of Arsenal’s 2011 edition, but Klopp proved on Sunday that he is more than capable of such a delicate feat.

After the euphoria of Europa League advancement in midweek, a Premier League visit to mid-table Bournemouth on a breezy Sunday afternoon promised to be at the opposite end of the footballing excitement spectrum. The announcement of Klopp’s starting line-up compounded such fears. Two full debutants. Two first Premier League starts. A central midfield of Joe Allen and Kevin Stewart.

The 11 players that started for Liverpool at the Vitality Stadium boasted 916 Premier League career appearances. Defensive pairing Kolo Toure and Lucas Leiva alone provided 567 of that figure. Toure and Lucas had started 469 Premier League games combined, compared to 223 across the remaining nine. Yet the Reds were just as thrilling in attack – and suicidal in defence – for large quantities of Sunday’s 2-1 victory.

31 – Liverpool have now used 31 different players in the Premier League this season, more than they have in any other PL campaign. Tinker.

Roberto Firmino was the sole survivor from Thursday’s 4-3 win over Dortmund as Klopp made ten changes to his side. Almost each of the replacements stepped up and took their chance. Danny Ward showed enough to suggest he can provide Simon Mignolet with enough competition for his goalkeeping spot. Brad Smith was solid at left-back, with no player making more tackles (five). Stewart completed the most passes (66) and enjoyed the most touches (90) of any player on the pitch.

It was in attack where the Reds excelled once more. Sheyi Ojo and Jordon Ibe provided pace, trickery and danger from both wings. The 18-year-old’s performance was a particular delight, showcasing a football intelligence belying his years, and terrorising the home defence. The most exciting product of Liverpool’s class of 2016 relished the latest step in his development.

For Ibe, Sunday was a timely reminder of his talents. The 20-year-old’s progress has stalled somewhat during a difficult season, but an assist, only his third ever in the Premier League, will boost his confidence. No player created more chances (five), and he proved that he can play a part in the era of Klopp.

The two experienced members of the attack were, predictably, the most potent. Firmino has now scored at least two more Premier League goals than any other Liverpool player this season, while Daniel Sturridge scored his 49th for the club in 85 games. That is a remarkable record.

All in all, this was a successful afternoon for Klopp. The German will make no excuses for fielding an experimental line-up, nor does he have to. Sunday did not supply the same excitement and exhilaration as Thursday, but it provides just as many reasons for Liverpool fans to relish the future.