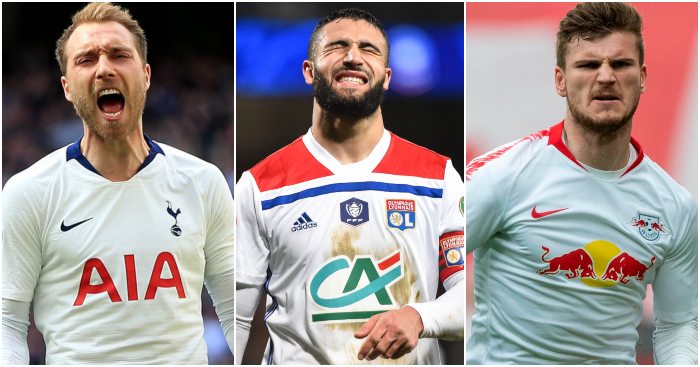 GK: David de Gea
The goalkeeper is refusing to recommit to Manchester United unless he gets something more closely resembling Alexis Sanchez money, which is only fair if Ed Woodward expects him to play behind that defence. De Gea didn’t help his cause by chucking in a couple of goals towards the end of the season but United fans have to hope that whoever is making the contract decisions at Old Trafford has a memory which stretches beyond the start of last month and recalls the four Player of the Season awards the 28-year-old has won while keeping the Red Devils from sinking any further during the post-Sir Alex Ferguson era.

RB: Thomas Meunier
The Belgium right-back is keeping his options open by insisting that he wants to stay at PSG while also fluttering his eyelashes at any club willing to pay a decent salary. Of course, one of those interested parties is Manchester United, while Everton have also been heavily linked with Meunier. Reports in France also suggested Arsenal were sniffing, despite right-back being the defensive position they least need to strengthen. PSG apparently want £26million for the defender who started half their Ligue 1 matches this season.

CB: Toby Alderweireld
The Tottenham defender is unlikely to reach free agency given he can leave this summer for only £25million due to a clause in his contract. United have been linked with Alderweireld (at this point, to save time, we’ll say now United have been linked with every player on this list unless stated) and so too have Juventus, but the Belgium defender spoke last week of his desire one day to return to Ajax: “I don’t want to make too popular statements, but it is certainly 100 per cent in my head.”

CB: Eric Bailly (Manchester United)
It’s three seasons since Bailly arrived at Old Trafford and we still don’t know what to make of him. At times, he looks like the rock United so badly need; on other occasions he appears to be the most calamitous defender at a club which has Chris Smalling and Phil Jones on its books. Worryingly, he is sometimes both of those things in the same match. Prior to being crocked against Chelsea just moments after escaping sanction for an inexplicable two-footer, it seemed like Solskjaer would cash in the centre-back linked most prominently to Arsenal, but his knee injury – another one – may complicate efforts to shift him this summer.

LB: Ryan Sessegnon (Fulham)
The 19-year-old’s first season in the top flight might not have been as productive as many might have hoped but that hasn’t deterred half of the Big Six from pursuing the England Under-21 international. Tottenham seems his most likely destination, despite reports of a firm approach from Manchester United last week. PSG, Juventus, Borussia Dortmund and RB Leipzig have also been mentioned as possible options for Sessegnon if he fancies moving further afield, though it is hard to fathom why Spurs wouldn’t follow up their long-standing interest in the versatile left-sider when Fulham are most vulnerable.

Ryan Sessegnon would be a great signing for Manchester United or Spurs.

Why people are judging an 18-year-old on his first PL season, I'll never know. Ease him into the fold at a top club – like Man City have done with Phil Foden – and we'll see just how good he is.#MUFC #FFC

CM: Blaise Matuidi (Juventus)
The World Cup winner turned 32 last month but he can still get around the pitch; he has started 39 games for Juventus this season. It was at this point in his contract when the midfielder left PSG for £18million and Juve would certainly expect to get their money back if they decide to cash in. They are hardly short of midfield options, with Aaron Ramsey coming in to join Miralem Pjanic, Rodrigo Bentancur, Emre Can and Sami Khedira.

CM: Ilkay Gundogan (Manchester City)
It seemed like the Germany midfielder was heading towards the exit door this summer with City unhappy about the 28-year-old’s reluctance to sign a contract extension before now. “I would prefer him to stay but at the same time I want to feel he wants to stay too,” said Pep Guardiola in March but it seems both sides have softened their stance now the season is out of the way. After the FA Cup final, Gundogan said: “Now is enough time to reflect on the situation and to take up the talks again more intensely with the club.” Borussia Dortmund and Inter Milan are said to be keeping a close eye on how those discussions pan out.

AM: Nabil Fekir (Lyon)
A year after the France star was left high and dry by Liverpool while he was still sat in his new red shirt, Fekir’s future is again the source of much debate. There is said to be a gentlemen’s agreement between the 25-year-old and Jean-Michel Aulas that Fekir can leave this summer, most likely for quite a lot less than the £53million Liverpool agreed to pay last summer before pulling out at the very last minute. Juventus, of course, are said to be interested, as are Spurs. United, surprisingly, have not been. Yet. Just wait until Aulas needs a patsy to ramp up the price…

RM: Christian Eriksen (Tottenham)
The Denmark playmaker is biding his time, presumably waiting to see what happens at Tottenham during a pivotal summer while assessing what other options he may have. Real Madrid can’t buy everyone and it seems the door is closing on that option, leading Spurs to hope that Eriksen might be convinced to recommit after all. But despite showing a willingness to double the 27-year-old’s current £75,000-a-week contract, Eriksen knows he could get the same money – most probably a lot more – almost anywhere. There is still no hurry and Eriksen might be best advised to sit tight for now before he pens the most important contract of his career.

LM: Eden Hazard (Chelsea)
The summer’s most inevitable transfer will see the Belgian move to Real Madrid, unless they decide to haggle over Chelsea’s £100million demand. Which they would be fools to do. But, Florentino Perez…

CF: Timo Werner (RB Leipzig)
“Our position is that if he does not renew the contract, he should change clubs,” said Ralf Rangnick this weekend in response to questions over Werner’s future, and there are plenty of sides willing to give the young Germany centre-forward that option. Liverpool have been persistently linked with the 23-year-old though whether the Reds would be prepared to stump up the £50million Leipzig reportedly expect remains to be seen. Bayern aren’t messing about this summer and they might be rather more willing to pay big money for a long-term replacement for Robert Lewandowski.