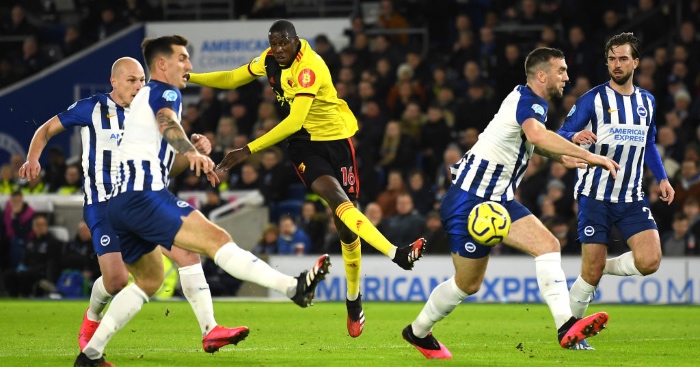 There are very few midfielders around like Abdoulaye Doucoure. And with the Frenchman admitting he is desperate to leave Watford – who would let him go “easily” – to play for a Champions League club, Premier League suitors will be queuing up to land one of the top ten best players outside the big six.

Doucoure joined Watford from Rennes in 2016 for just shy of £10million, and has arguably been their best and most consistent player since. He’s been coached by five different managers at Vicarage Road, with two separate spells under Quique Sanchez Flores, but has never looked as good as he does now in an advanced role for Nigel Pearson, who has given him the freedom to cover every blade of grass possible.

His solo goal against Bournemouth summed up his almost unique ability as a Premier League midfielder: the power to drive through the centre of the pitch having won the ball back inside his own half; the close control as defenders narrowed the space on the edge of the box; and the outstanding technical ability to take one final touch before firing past the helpless Mat Ryan.

Definitely the pick of the bunch 🚀 pic.twitter.com/6OfmgDo2p2

It was beautiful, the sort of goal that leads many to question why he has not got his big move before now. But under previous managers he was being tied down and was often unable to exhibit his true worth to the team. Unfairly typecast like Helena Bonham Carter as a dark-themed eccentric or Samuel L. Jackson as a bad mother******, Doucoure was pigeonholed into being a battling, ball-winning central midfielder.

And he can do those defensive hard yards, but it’s the moments of attacking brilliance that have seen him drag Watford away from almost certain relegation and to within a chance of survival.

It should make him one of the most highly sought-after midfielders in the country come the summer. Other than at Manchester City, where Pep Guardiola’s philosophy means nimble, fast-footed players exclusively hold those more advanced midfield positions, it’s hard to imagine how Doucoure wouldn’t improve the rest of the big six. While at least half of them are unlikely to be playing Champions League football next season, a move to any of them would represent the “next level” that Doucoure yearns for.

Lee Sharpe recently claimed Paul Pogba and new signing Bruno Fernandes could form a great partnership at Manchester United, alongside a third midfielder to carry the defensive burden. And in theory, he’s right. A dynamic, powerful, creative midfielder to complement Fernandes’ goalscoring ability would be a dangerous prospect for any opposition team. But that ally is not, and never will be, Pogba. The World Cup winner wants out of Old Trafford, and Ole Gunnar Solskjaer and the United board finally seem to have had enough of him and his reprehensible excuse for an agent. In Doucoure, they would be signing the player they hoped Pogba would become.

From one long-striding, driving midfielder to another, Doucoure could be Arsenal’s new Patrick Vieira. Although Mikel Arteta’s long-term philosophy will somewhat mimic that of his mentor Guardiola, the Spaniard would do well to borrow some ideas from Arsene Wenger, who built his team around a player Doucoure picked out as his Premier League hero growing up. What Arteta will be aware of by now is that Arsenal will get nowhere near challenging for major honours with Granit Xhaka, Matteo Guendouzi and Lucas Torreira as their central-midfield options. They’re hardworking at best; ponderous and unimaginative at worst. Mesut Ozil’s astonishing lack of productivity also means he causes far more problems than he solves.

Chelsea have been linked with a move for the Doucoure. Ruben Loftus-Cheek is proof of the impact a midfielder in this mould can have on their team, particularly when faced with the classic conundrum of breaking down a defence and midfield happy to sit back. At his best, for both Chelsea and England, Loftus-Cheek plays on the half-turn and can be baring down on goal with a drop of the shoulder to leave the opposition midfield in his wake. The frustration at Stamford Bridge was initially at his lack of game time under managers unwilling to give youth a chance, and now stems from a spate of injuries that he looks finally to be recovering from, but will no doubt continue to plague his stop-start career. Doucoure represents a similar alternative that will be able to string games together and have the consistent impact Loftus-Cheek has hinted at, but ultimately failed to produce.

Tottenham are unlikely to plump for Doucoure, having signed Gedson Fernandes in January along with the now permanent acquisition of Giovani Lo Celso, and Tanguy Ndombele in the summer. Which isn’t to say the Watford man wouldn’t improve them; he would, they just have too many midfielders.

Then of course there’s Liverpool. A team within which it’s difficult to find fault or room for improvement. Doucoure would by no means start every game for the title-cruising Reds, but with Adam Lallana likely to leave Anfield, and Naby Keita and Alex Oxlade Chamberlain’s penchant for niggling injuries, having another top midfielder to rotate with Gini Wijnaldum wouldn’t be the worst move for Jurgen Klopp. Not least because the Frenchman would then not be able to sign for a Premier League rival.

Doucoure will leave Watford in the summer, whether they stay up or go down. He’s simply too good not to be playing in the Champions League. As a midfielder of proven quality, adapted and perfectly suited to the Premier League, the top clubs would be mad not to go all out to sign him.