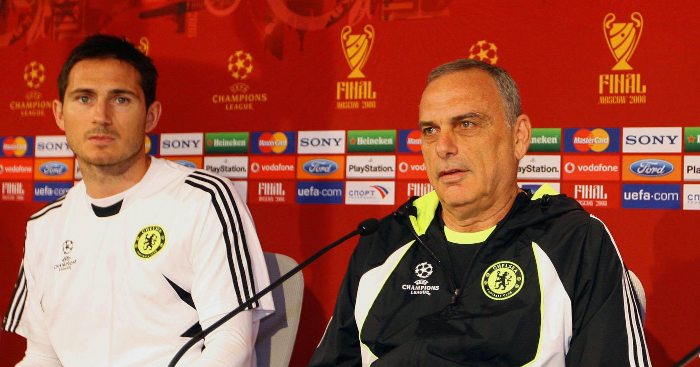 Roman Abramovich is mulling over a Chelsea return for Avram Grant so he can assist Frank Lampard, according to reports.

Grant is a close friend of the Chelsea owner. The former Israel manager was brought in as their Director of Football in July 2007.

Jose Mourinho was sacked as Chelsea boss in September 2007 and Grant was chosen to take over from the ‘Special One’.

F365 FEATURES: How long since every Premier League club has topped the table

Grant was named Manager of the Month in April 2008. He also guided Chelsea to the Champions League final during his first season in charge.

But the Blues lost on penalties in the final against Manchester United. It was revealed in May 2008 that Grant’s contract had been terminated.

Sky Sports are reporting that Abramovich is considering bringing Grant back to the club. The Blues owner believes that Grant’s experience would be a useful addition to Lampard’s team.

The former Chelsea boss recently took to Instagram to offer his support to Lampard:

“But in the situation like this when things aren’t going well you need to be strong, look for solutions and show a lot about your character.

“What I can say to Frank and the others at the club is be patient. More than this do whatever is necessary to do, that’s for sure. Two things: never lose it even when things are going well, don’t lose your fighting spirit at the highest level.

“And second, don’t lose what you have here [points at head] – you need to think right and look for solutions. If you do that, then everything will be OK because the quality is there and there is a potential like there was [at Chelsea] in my time.”