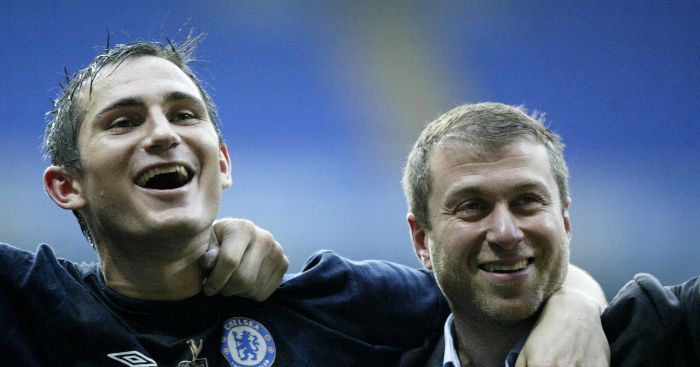 It was almost exactly a year ago that Roman Abramovich withdrew his application to extend his investor visa in the United Kingdom. It would begin a sequence events which, circumstantially at least, suggested that at best his interest in Chelsea was waning and, at worst, that he was actively look to sell the club.

As recently as April, it was revealed by The Telegraph that, on account of being unable to attend as many games, Abramovich was no longer paying for his corporate hospitality in advance. Added to the whispers of interest from Salt Lake, an American private equity fund, and Sir Jim Ratcliffe, the British-born petrochemical billionaire, Abramovich’s absent father image has depicted the club as an organisation caught between acts.

In May, that was denied. ESPN reported that the Russian has no interest in selling and, moreover, has never had a conversation with a single interested party, be it Salt Lake, Ratcliffe, or anyone else.

So, issue seemingly over.

Or at least it would be if Chelsea didn’t still feel like a club at a crossroads. They are in a literal sense, of course, because Maurizio Sarri’s compensation has been agreed and he will soon head back to Italy and Juventus. The Eden Hazard epoch is over, too, and something or somebody must now grow into the resulting void. But those are short-term distractions from the club’s weak intellectual pulse and their absence of long-term, detectable aims.

Ideology is a big part of a modern football, clearly. That doesn’t just relate to how a team plays, but also what they stand for and what their existence means. Those are conversations which involve soft power and political influence and, clearly, Abramovich is well-versed in both. Among Chelsea’s peers, though, such vision tends to manifest in more advance ways, through well-defined sporting objectives and the support of a coherent, properly aligned structure.

The same isn’t really true at Stamford Bridge. With or without Sarri, there remain those strange gaps in their hierarchy which imply neglect or indifference. Compared with the army of executives at Manchester City or Paris Saint-Germain, or the precise division of labour at Liverpool and Juventus, they come across as a club who would like to be successful – who want to win more Premier Leagues and European Cups – but who aren’t overly committed to those ambitions anymore.

Abramovich may well have no intention of selling the club. But, other than second-hand quotes and the prominence of Marina Granovskaia, his eternal ally, what evidence is there of an appetite to compete with the continent’s very best? Chelsea are no longer an apex predator in the financial sense – that’s certainly restricting – but what efforts are being made to bridge that gap and to be as efficient as possible?

Is there any long-term strategy or, as in 2003, is it just a case of reviewing the head-coach’s position every twelve months and supplying a few new, semi-suitable players as a gesture? Lazy is too damning a description, but Chelsea’s processes – the mechanisms they use to put a team on the field – are very half-hearted within their contemporary context.

Frank Lampard would accentuate those issues. Lampard is an intelligent and engaging man; he may well be a very fine coach in the future. Nevertheless, his coaching record is not substantial enough to sign off on yet, nor good enough to warrant unconditional faith. That isn’t to say that he would be a poor appointment, just that his return to Chelsea – as a developing and imperfect head coach – would have to be packaged properly if it’s to be successful. His knowledge of the club helps to an extent and Jody Morris would surely return with him, but would a system be created into which he would slot, or is the power of his past associations expected to compensate for the experience he doesn’t yet have?

Presumably and on current evidence, it would be the latter. On certain levels, Lampard makes perfect sense. Chelsea’s crop of young players are almost ripe for harvest and he and Morris can be trusted to shoulder that responsibility. Derby County were built partially on a group of developing players who seemed to respond well to his management. Mason Mount’s performances attested to that, much like the form of Fikayo Tomori. But these are still minor synergies which ignore the bigger picture: Lampard would have to considered a project appointment and as someone who would require a degree of lenience and understanding. In addition to the obvious need for a sporting director and fundamental changes in the way the club identify and procure talent, Chelsea would have to be reconditioned to tolerate and support his growth.

Whenever an old player returns to manage a club, the Pep Guardiola example is always cited as evidence of foresight. But while he was cosmetically suited to coaching Barcelona and brought desirable intangibles to their technical area, it’s generally ignored that he benefited greatly from the patronage of some very powerful people – Joan Laporta, of course, but also Johan Cruyff, the club’s highest prophet. Rather than just wanting Guardiola to succeed, they were determined that he would, indulging his ideas and purging the first-team squad of its ego to make it more malleable. As and when necessary, they even circled the wagons around him.

That Barcelona era began in 2008 with a comprehensive 4-0 win over Wisla Krakow in the Champions League qualifying rounds. Before the end of August though, they would lose 1-0 to the Polish side in the second leg and, then, humiliatingly, begin their La Liga campaign with a loss at newly-promoted Numancia. Fortunately for Guardiola, already under fan pressure in spite of his past, Cruyff was public and effusive in his praise, referring to the team as ‘the best Barca side… in many years’ in a Spanish daily newspaper.

In retrospect, that seems like a trivial anecdote. But in reality, it characterised the kind of environmental deference which young head coaches need whenever they’re promoted into vulnerable positions at demanding clubs. Chelsea don’t have a Cruyffian spiritual guide – few clubs do – but nor do they seem built to accommodate anyone who cannot deliver a quick burst of gratification.

Sarri was the perfect example of that myopia. He was tactically stubborn and his predictable football won him few friends, but little acknowledgement was given to his strengths or to the abilities that he did possess. Sarriball was badly oversold in England, that’s probably fair, but Chelsea paid so little attention to its mechanics that the attempt to transplant Napoli’s football became an agonising struggle. That was Sarri’s personal failure, but his employer was complicit in it, too. The subliminal messages last season were clear: if this didn’t work, the club would be happy to reach for the reset button at season’s end.

It’s typical, because there’s never any commitment at Chelsea.  There’s no evidence of conviction in a chosen path or a sign that they’re willing to fight for any ideas. If something doesn’t work immediately and well, then the response is always to toss it straight in the fire. That mentality may have decorated the trophy cabinet in the past, but it’s also what now, in 2019’s football world, has rendered them a low-wattage club. They remain financially healthy, they’re heading back to the Champions League, yes, they even won a European trophy less than a month ago, but there remains that absence of clear sporting value, which means that now, as before, they’re left having to import their power and personality from the outside.

It’s impossible not to link that with Abramovich and his long, slow fade into the background.