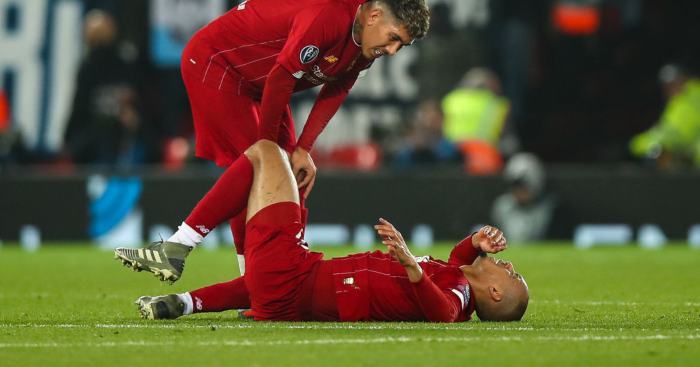 Liverpool midfielder Fabinho will be out for more than a month after suffering ankle ligament damage during this week’s Champions League clash with Napoli.

The Brazilian, who has this season established himself as a first-choice pick for Jurgen Klopp‘s Premier League leaders, was substituted after just 18 minutes of the 1-1 draw at Anfield.

Liverpool have now announced that the 26-year-old will play no part in their congested run of 10 games between now and the end of December.

“Further assessment on the injury has discovered Fabinho will be out of action until the new year.

“The Brazilian will begin a rehabilitation programme with the Reds’ medical team at Melwood as he works his way back to full fitness.”

“We are not 100 per cent sure how long it will take but looks sure he will not take part in the Christmas fixtures. We have solutions for the position. We are not the only team with injuries. We have to find a solution and that’s what we will do.”

Adam Lallana, Jordan Henderson and Gini Wijnaldum were mentioned as possible stand-ins, with a reshuffle in the centre likely, but Klopp admitted none represented a perfect like-for-like swap.

Klopp added: “Will it be exactly like Fabinho? Of course not. Nobody is like the other one. But it will be a good one.

“It’s not that they aren’t as good as him, it’s that they are different, have different qualities. We just have to make it work. That’s always the job.

“Fab couldn’t have played all the games from now until March, that was clear anyway.