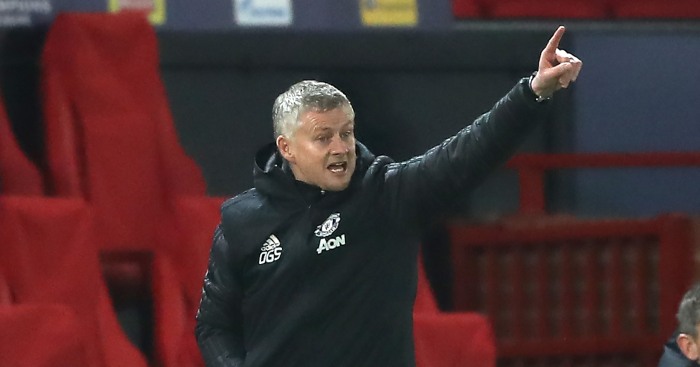 Quirk, quirk, quirk
The word ‘curse’ invokes the supernatural. Something constructed by evil forces that the victim is powerless to control. So Mediawatch had to smirk at this on the Manchester Evening News:

And what is this ‘curse’?

‘It’s one of the many quirks of Ole Gunnar Solskjaer’s Manchester United tenure that his record in cup competitions is so good, until it comes to the moments when the pressure is really on.’

Ha. A ‘quirk’ is defined in the dictionary as ‘a peculiar aspect of a person’s character or behaviour’. What the MEN is describing there is failure. It’s not ‘peculiar’ that a pretty average team under a pretty average manager is yet to win a trophy; it’s logic.

Was it ‘stay on the pitch’?

The blame game
The quest to absolve Ole Gunnar Solskjaer of any real blame (he is ‘cursed’, you see) continues in the United propaganda machine with this headline:

Yes, because a manager making a considered but ultimately ridiculous decision is nothing compared to a footballer missing a couple of chances.

‘Anthony Martial showed why he has literally been moved aside for Cavani with a lackadaisical swipe in the 49th minute that left Pogba on his knees in disbelief and Solskjaer disgusted. Seven is associated with a winger and Martial, after requesting to reclaim the ‘9’ last year, should perhaps swap numbers with Cavani.

‘Cavani still mimicked Cantona with an imperious 25-yard chip that bounced off the crossbar and Martial hit Marquinhos on the rebound on a night the Frenchman was as culpable as Fred.’

A player who missed chances was ‘as culpable’ as a player who should have been sent off for a headbutt and a series of dangerous challenges? And both have to take more of the blame than the manager who kept him on the pitch? Really?

Ole! Ole! Ole!
This view is reflected in the match ratings in the Daily Mail, who award Solskjaer 6/10 for his management of a 3-1 defeat while Fred was given 5/10 for a performance that should have ended after 21 minutes and Anthony Martial 5.5/10 for missing a big chance.

Oh and Martin Samuel wrote a 1254-word match report and never once mentioned the Manchester United manager. How very odd.

Now and then there’s a fool such as Ole…
There’s no doubt about the story of the night in Manchester and The Sun‘s back page tells us that ‘Red Devils boss Ole Gunnar Solskjaer admitted he may have blundered by not subbing midfielder Fred before he was sent off’. The headline on their website? ‘Fred escapes red card for headbutt as Man Utd boss Solskjaer admits he was foolish not to sub star before second yellow.’

Did he balls admit he was ‘foolish’. He did not even admit he ‘blundered’. He simply doubled down on his decision and blamed the referee.

“Fred played really disciplined second half and when he makes a tackle like this you can’t really fault the boy. We spoke at half time and just said ‘be sensible’ and he was, he played well.

“When the decision the ref made you maybe look back and say you should have – but there was no reason from his performance to take him off.”

‘Be sensible’ is pathetic. As is any pretence that Solskjaer somehow saw the error of his ways.

Another level
Over at the Daily Mirror, David McDonnell writes:

‘An experienced, top-level manager would not have allowed him to have emerged for the second half, given how dangerously the midfielder had lived in the first 45 minutes.’

That’s being too kind to Solskjaer. Any manager – at any level – and indeed any sane person not called Ole Gunnar Solskjaer would have made that substitution. His refusal was not an indication of inexperience but of ineptitude.

Slow and furious?
Watch this…

Neymar and Scott McTominay exchange views on footballing philosophies as the sides head in for half-time at Old Trafford 👀 pic.twitter.com/JHqtkQspmO

…and then tell us at what point that descended into a ‘furious bust-up’ (MailOnline)? Oh and ‘the pair are forced to be SEPERATED’ makes no sense with or without the bizarre capitals.

McTOPinay
We had to remind ourselves that Manchester United lost – and that Scott McTominay was on the losing side – as we perused these headlines:

Can he claim the moral victory?

Big glove
We’re not saying The Sun have got carried away but they claim that ‘Jurgen Klopp may have the next Manuel Neuer on his hands’ after Caoimhin Kelleher played one full game of Champions League football.

We’re not sure Neuer ever let in seven goals for his club’s Under-23 side.