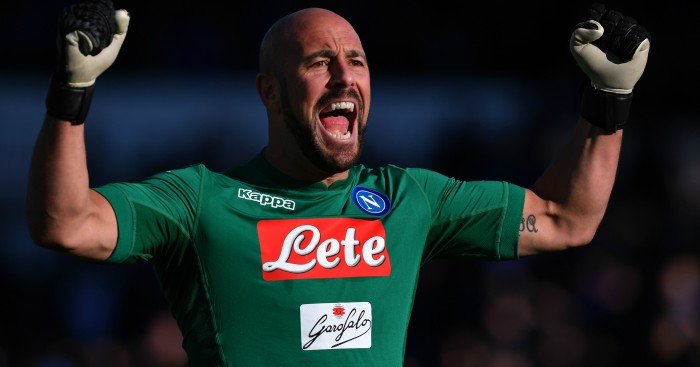 Former Liverpool stopper Reina is in the final months of his contract at Napoli, who are challenging for the Serie A title.

The 35-year-old has spent three seasons as No.1 at Napoli, but with his deal due to expire in the summer, AC Milan are keen to speak to Reina as speculation continues to surround the future of Rossoneri keeper Gianluigi Donnarumma.

Milan sporting director Massimiliano Mirabelli told Sky Sport Italia: “We did inform Napoli that we want to speak to Pepe Reina’s agent, because we want to see if there’s a possibility of bringing the player to Milan.”

Donnarumma, who conceded twice during Arsenal’s 2-0 win at the San Siro on Thursday, has been hailed as the heir to Gianluigi Buffon’s throne in the Italy goal but the 19-year-old is also sontinually linked with a move away from AC Milan.

His agent, Mino Raiola, said recently that if it was his choice then Donnarumma would leave Milan this summer. PSG and Real Madrid are both said to be interested int he teenager.