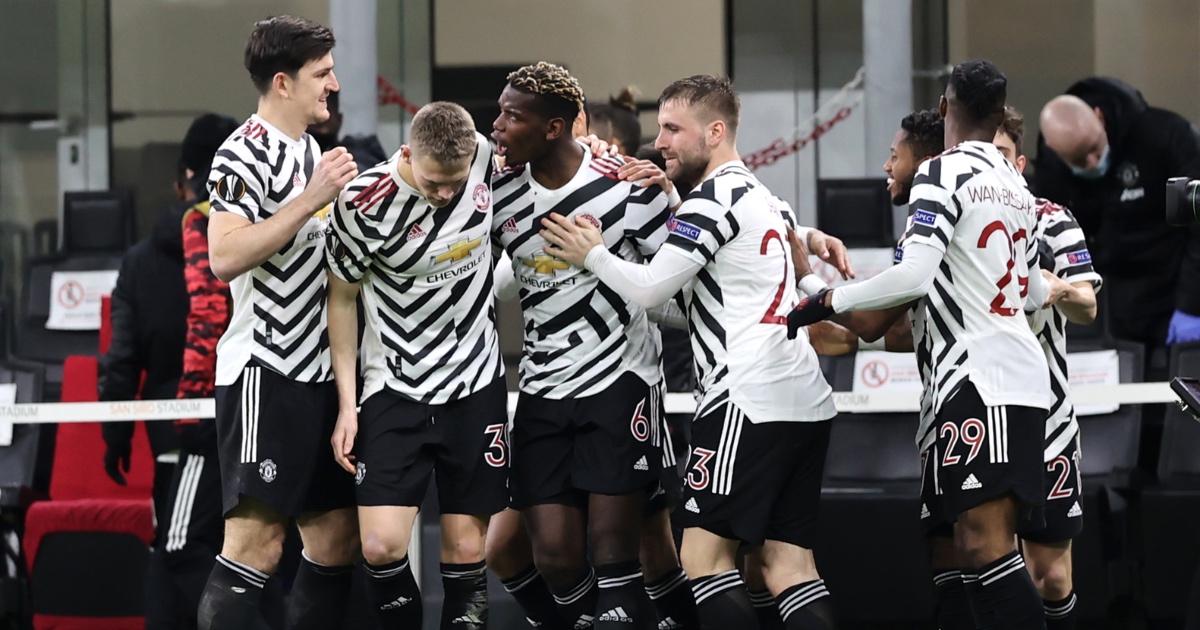 Paul Pogba returned from injury with a bang as the super sub fired Man Utd to victory at AC Milan and a place in the Europa League quarter-finals.

Pogba missed the first leg during a 40-day absence with a thigh injury and made a timely return at San Siro, where he scored minutes after his half-time introduction to secure a 1-0 win and 2-1 aggregate triumph.

The France midfielder’s smart 48th-minute strike was a gut punch for Milan, who had looked confident during a cagey opening period in which United struggled to impose themselves.

That changed when Pogba was introduced at the break and scored from close range having shaped to cross, leading Milan to turn to ex-United striker Zlatan Ibrahimovic on the bench.

Dean Henderson made amends for letting in Kjaer’s leveller last week by superbly denying the 39-year-old as the Red Devils held out to keep their hopes of Europa League glory alive.

Solskjaer’s unchanged side started on the front foot at the empty San Siro, where Milan were happy to sit deep in a bid to negate the visitors’ counter-attacking prowess.

Bruno Fernandes blazed over following good play by Luke Shaw in a rare first-half opportunity for United, whose winger Daniel James went down screaming for a penalty on a rare burst in behind.

The Wales flyer was denied in the box by Fikayo Tomori’s recovery tackle and referee Felix Brych saw nothing wrong with it.

Milan grew as a threat as the opening period wore on and took control against increasingly sloppy United.

Harry Maguire put in a timely challenge to halt a fine run from Theo Hernandez and Victor Lindelof had to make a key tackle on Franck Kessie following an errant Fernandes backpass.

Milan continued to knock on the door as half-time approached.

Tidy build-up led to Alexis Saelemaekers getting away a strike that Henderson could only parry, with Rade Krunic directing wide under pressure on the stroke of half-time.

Solskjaer turned to Pogba in place of Marcus Rashford at the break in a bid to change the dynamics – an alteration that paid dividends three minutes later.

James saw a shot blocked to start a penalty-box melee in which United kept their cool, with tenacious Fred’s pressure on Soualiho Meite leading the ball into Pogba’s path.

Five yards out but at an acute angle, he shaped to cross only to strike past Gianluigi Donnarumma at the near post.

Henderson stopped Saelemaekers’ immediate attempt to draw level as the goal opened the game up, with Pogba underlining the visitors’ renewed belief when trying to score from his own half.

Milan were desperately trying to prise open the United backline and Lindelof threw himself in front of a shot by Kessie, who glanced wide before Ibrahimovic got a powerful header on target.

The veteran star towered above Shaw to meet Hakan Calhanoglu’s cross from the left, only for Henderson to produce a big save from his near-post header in the 74th minute.

Fernandes tried his luck from a long-range free-kick as Milan appealed for whatever they could, with Scott McTominay stretching to direct a dangerous ball back to Henderson.

Fernandes saw an attempt deflect wide as the clock wound down, with United keeping their heads to secure their place in Friday’s Europa League quarter-final draw.