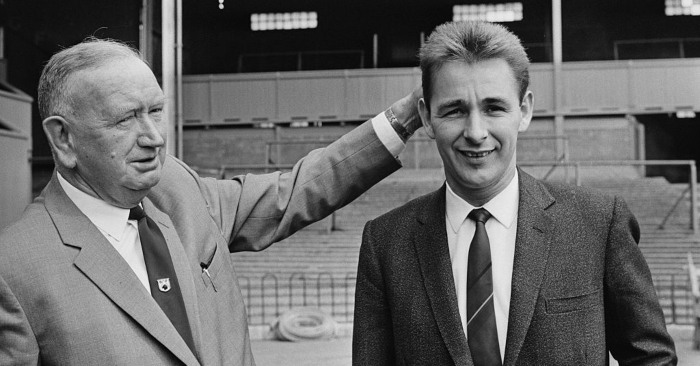 Brian Clough’s playing career began its end on Boxing Day 1962. Chasing a through ball from Len Ashurst, he collided with Bury goalkeeper Chris Harker and his head thumped into the frozen Roker Park pitch. But the true legacy was left in Clough’s knee: his cruciate and medial ligaments were torn and his days as a free-scoring forward were over.

Footage still exists. It’s grainy and off-speed, but the violence is still vivid and the unnatural angle at which Clough tumbles is telling enough. It’s his knee, it’s serious and it’s most probably the end.

It wasn’t an unusual incident, because collisions between goalkeepers and forwards had already cast a dark shadow. In 1931, Celtic’s John Thomson was killed when Sam English’s knee depressed his skull and, 22 years later, Derek Dooley would have his leg amputated following complications resulting from his collision with Preston’s George Thompson. Clough’s case is particularly compelling, though. Of course – obviously – because of what he would rise to achieve as a manager, but it’s also the source of debate: what would Clough the manager have been had his playing career not been quite so short?

In hindsight, his personal struggle during that period has been de-emphasised by a remarkably successful life. He would win league titles with Derby County and Nottingham Forest, he would famously add a pair of European Cups in 1979 and 1980 and, as his myths entwined with his medals, his place in football’s pantheon would become unimpeachable. In that context, anything which happened decades before seems incidental.

But it wasn’t and it’s important to stress that – to place Clough’s injury and its implications within its proper context. He was 27, he’d scored 24 goals in 24 Second Division games that season, and there he suddenly was, his face covered in blood and his knee mangled beyond repair. His life must have seemed altered forever. Football’s maximum wage had only been abolished the year before and vast insurance policies were a long way in the future. Clough, with no formal qualifications or financial security, was suddenly very vulnerable.

It’s an interesting juncture of his life to study. In popular culture, Clough is a figure of total conviction. To imagine him with fragilities feels bizarre. Perhaps that was the beginning of some kind of lifelong compensation, during which layers of self-confidence were constructed on top of a deep wound. That would be an amateur psychiatrist’s diagnosis, certainly.

But it doesn’t necessarily follow. At least, there isn’t that much to suggest that the person was dramatically and permanently altered. Clough was forthright before and after. He was mouthy and cocksure even in his twenties, by all accounts an absolute pain at Middlesbrough and Sunderland. It was behaviour indicative of who he was, rather than what he had experienced.

He would spend the next three months in plaster. Once it was removed, he would spend 18 more toiling for an unattainable fitness, running the steps of the stand at Roker Park and the sands of Seaburn beach. He would play again, appearing three times for Sunderland in the opening months of the 1964/65 season, but his darting pace was gone for good and by that Christmas his retirement was a formality.

Brian Clough is the latest Portrait of an Icon. The manager who led a provincial club to the very top of the game. https://t.co/bbvADpFazw

The portrayals of Clough during the depths of that aftermath are not flattering. George Hardwick, Sunderland’s manager from 1964 to 1965, remembered “a very sick and sad young man”.

“He hated ever member of the club from first team down to the A team because they could do something he couldn’t – go out on a Saturday and play football. Boy, was he bitter.”

That hatred seems to have manifested in a variety of ways, from public criticism of his teammates to a growing capacity for manipulating the press. His misfortune famously created a lifelong aversion to injured players, but the mood in which he wallowed seems also to have bred a growing political cunning, with the darker arts of his management style – the ability to tweak public sentiment, to focus the news cycle in a way which benefited him – first appearing.

But that’s slightly too close to David Peace’s caricature to be wholly accepted. Too much like the paranoid Clough who spends The Damned United’s darkest chapters being pursued by Revie’s ghost.

Insecurity was certainly one of his life’s subliminal themes, but that’s more attributable to his background than any misfortune in later life. He failed his Eleven Plus exam, which biographers depict as a constant background weakness, and his life was destined to take him in one of two directions: either to the ICI factory in Middlesbrough or into football.

Passing comment now on the static nature of working-class life and the neuroses it may have bred seems speculative, but Clough’s feelings towards the world seem more likely to have been instructed by his place in that world. Injuries would have been an accepted part of life for a footballer, not a unique tale of woe (and especially not less than five years after Munich). Retirement would have brought depression and Hardwick remembered a great deal of envy, but suggesting it altered his genetics is likely a step too far.

As it would be to claim that injury fostered the money-lust which stood in apparent contradiction of his socialist beliefs. The theory being that the insecurity to which he was exposed created a lasting and insatiable appetite for security. Maybe that was a need stressed by his situation, but he was still selling knock-off shoes from his hospital bed in the days after his operation. Either that facet of his personality sprouted overnight, or it had always been there.

Had Clough not ruptured his ligaments, would money still have strained his relationships and would he have been so determined to profit from his television work? Most likely, yes. Would he still have habitually re-negotiated his contracts and used whatever leverage he had to his advantage. Probably. The means he employed might not have been as effective – he certainly came to understand just how vulnerable his popularity with fans made his various employers – but he was still be entitled to his ambition and to his desire to provide for his family.

Actually, many of the general personality traits which form Clough’s legend were visible long before 1962. The forthright young player who enraptured Peter Taylor at Middlesbrough, for instance, was as stubborn and as provocative as the Clough from Duncan Hamilton’s Provided You Don’t Kiss Me. The mannerisms and idiosyncrasies presumably hardened and multiplied over time, but the Clough who sits between Austin Mitchell and Don Revie in 1974 doesn’t seem much changed from the 20-something whose self-belief had irked Walter Winterbottom and Billy Wright in the 1950s.

That seems largely true of most of the interactions which colour his legend. Clough would still most likely have had a tempestuous relationship with Ernest Ord and resented Sam Longson’s ego. Even with two good knees and a full playing career, he would still have told Bremner, Giles and Hunter where they could throw their medals. And, even if he had poked the ball beyond Chris Harker and hurdled his challenge, he would still have existed in a different world to anyone who worked at the FA.

Instead, the injury’s influence was largely logistical. It provided the time and opportunity to coach Sunderland’s A team – a stop-gap which seemed to create a conviction in his management abilities – and would also eventually align him with Taylor. Inadvertently, it launched his second career at the perfect moment.

In 1965, Clough was appointed by Hartlepools United, which in itself was a stroke of luck. Before being sacked by Sunderland, George Hardwick had sought to occupy the wayward, injured forward. It was Hardwick who gave him the A team job and, remembering how the young players had responded to Clough, Hardwick again who recommended him to Hartlepools. Whether that initial offer was out of pity or just an attempt to keep Clough out of trouble, it represents the genesis of everything that would follow.

Taylor would join him, of course, but when they met to discuss their potential partnership, he was shocked by what he found. Clough wasn’t a young, thrusting coach full of aspiration, but a man in the wind, beaten hard by life.  It’s one of the most enduring passages from With Clough By Taylor, the autobiography which would end their friendship for good.

“His face reflected a dreadful year. If it had been any longer, he’d have gone to pot. He was a no-hoper: jobless, boozing, and on his way out. He’d been having a really rough time. One minute the world was at his feet, the next his career was at a dead-end. It was an overweight and a careworn Brian Clough I was looking at.”

It offers a different vantage on their relationship. Clough was the ‘shop floor’, Taylor was the ‘goods at the back’. It’s a natty soundbite which aptly characterised their division of labour. How credit is divided between them is something which will be argued about for eternity, but they certainly needed each other and the timing of their union, because of where Clough’s life was headed, seems critical. In fact, had he not been quite as downtrodden, would he have had the humility to recognise the need for Taylor?

Had their partnership not begun at that particular moment, their individual histories would most likely have been very different. Clough, because his charisma needed to be backed by Taylor’s appreciation for the game’s mechanics. And Taylor, because his awkward manner and nervous ticks meant that he was more at ease in the shadows. They were always less apart than they were together and the great irony is that perhaps, had the Roker Pitch been firmer and had Harker been quicker off his line, that might never have been so.