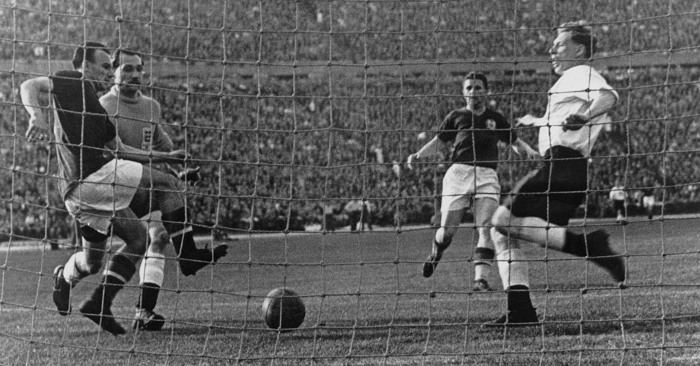 The immediate consequence of England 6-3 defeat by Hungary In November 1953 was that six members of Walter Winterbottom’s side never played for their country again. The international careers of Harry Johnston, Stan Mortensen, Ernie Taylor, George Robb, Bill Eckersely and Alf Ramsey were ended by Puskas, Czibor and Hidegkuti.

That actually sounds encouraging. The Hungarians had come to Wembley and diced their opposition with short passing and superior movement. The jettisoning of over half the team in response suggests, at first reading at least, that it provoked a much-needed reaction. And the more you read, the more you appreciate just how much England had it coming. There’s a very famous Billy Wright quote which resonates like a parody of British complacency.

“When we walked out at Wembley that afternoon, side by side with the visiting team, I looked down and noticed that the Hungarians had on these strange, lightweight boots, cut away like slippers under the ankle bone. I turned to big Stan Mortensen and said, ‘We should be alright here, Stan, they haven’t got the proper kit’.”

Six months later, Winterbottom’s England travelled to Budapest for the return fixture. Still lining up in a WM formation, still with the emphasis on wingers and physical exertion and hoping for a quick revenge, they found themselves 6-0 down inside an hour. Hungary would eventually win 7-1, inflicting what remains the worst defeat in England’s history.

In his book, The Anatomy of England, Jonathan Wilson records some of the native attitudes before, between and after those games. A few weeks prior to the Wembley game, Hungary had played a preparatory friendly against Sweden, with members of the British press in attendance. The Hungarians managed just a 2-2 draw, leaving parts of Fleet Street salivating with glee.

‘Scottie Hall, in the Sketch and Graphic, was… scathing. ‘Hungary, despite their self-appointed English publicists, who have pictured them as an inimitable, unbeatable, unfoolable, never-happened-before-able bunch of footballers, yesterday chose to reveal themselves as possessing the ordinary human frailties.’

When England subsequently lost, many of those who had been ridiculed – ‘the self-appointed English publicists’ – restated their concerns about tactics and movement, positioning and craft. But many others, it seems, doubled down on what remains an unoriginal diagnosis, attributing the defeat largely to conditioning problems. It may have have been recognised that England’s place in the game was not what it had been, but the explanation appears to have been eye-rollingly trite.

If only the players could run a bit further, tackle a bit harder, and worry about money a little bit less.

The neatened version of this story often depicts Hungary 1953 as a pivot for English football. Like an early precursor to what Germany suffered through after their dismal Euro 2000, it’s seen as a brutal awakening which forced every working mind in the country to scurry off in search of enlightenment.

For some, it was that. Sir Bobby Robson was in the crowd at Wembley that night and so too Ron Greenwood, who was still a player at the time. Both spoke later about the Hungarians’ effect on their personal view of the game and Greenwood’s account reads more like an epiphany.

“It showed beyond all doubt that football can be a game of beauty and intelligence, a lovely art as well as a muscular science.”

Another to draw influence was Don Revie. The 1956 FA Cup final is understandably remembered for Bert Trautmann’s broken neck, but it also featured Revie – the player – occupying a withdrawn centre-forward role which owed a clear debt to Nandor Hidegkuti. Later, as a manager, his emphasis on wingers could also be attributed back to ’53, as could his ability to navigate the periodic lack of an orthodox centre-forward.

Which, together, really answers the question: Hungary’s victory did have an evangelical effect, but on individuals rather than English football as a community. If the defeat had not occurred, or if it had not been inflicted in such an inarguable way, the germination of ideas would have taken far longer.

Alf Ramsey remains the obvious agent of change, partly because the symmetry was all so neat. His international playing career ended at Wembley and, in less than two years, he was managing recently relegated Ipswich Town in the Third Division. In one of the great, overlooked achievements of the early post-war era – most likely because of what he himself would go on to achieve – Ramsey won two promotions with Ipswich in 1957 and 1961 before – in their first season after reaching the top flight – winning the First Division title in 1962.

Ramsey was incredibly innovative. Perhaps chastened by that final experience at Wembley, in which the frailty of the WM was laid bare, he would become an early domestic champion of the back four. He also, more famously, would win the World Cup without the use of wingers, an almost heretical challenge to English football’s identity and an obvious deference to defensive security. It’s much too convenient to claim that Ramsey’s entire outlook was defined by a single 90 minutes, irrespective of how chastening it may have been. But given his perspective on England’s dismantling – as one of the full-backs in the shot-through three-back system – it’s likely that it did at least provoke some reflection.

Perhaps it spawned an ideological difference, too. Ramsey had far more autonomy than Winterbottom. One of the conditions of him accepting the job was that he, not the FA’s selection committee, would have complete control of selection. But he was evidently more open to outside influences, too. Having been appointed in 1963, the ideas which eventually comprised his World Cup-winning side were built up over time, through experiments, adjustments and, importantly, by exposure to outside thinking.

Nobby Stiles, for instance, owed his place to Ramsey’s gradual recognition that he needed more protection for his defence, a realisation that dawned on him after England’s humbling tour of South America. It’s a minor adjustment by today’s standards, but relative to what had come before and how wedded England had remained to what they knew, it marked a sea change.

Results were actually fairly indifferent prior to 1966, but they can be partly explained by Ramsey’s capacity to experiment. It’s easy to forget, of course, that the team immortalised by the World Cup didn’t take shape until very shortly before it. Stiles, of course, was a late addition, but so too was Alan Ball, who first appeared on the right wing in April, in the same friendly against Scotland in which Bobby Charlton first adopted that advanced midfield role for his country.

It all stood in such vivid contrast to the retelling of Winterbottom’s reign, one of the most stinging criticisms of which was delivered in Stanley Matthews’ second autobiography, in which he remembered reaching the dressing-room at half-time against the Hungarians and being given no fresh instructions on how to deal with Hidegkuti et al in the second half.

History is very tough on Winterbottom. In his biography of England managers, Brian Glanville described him ‘as a kind of civil servant, impervious to change, unafflicted by results’. He’s not gentle with the knife in respect to Winterbottom’s tactical performance against Hungary, either.

‘…knowing what (he) did about their strengths and weaknesses, surely it would have been possible to at least devise a plan to limit the damage.’

Now, he’s an emblem of English complacency; often depicted as aloof and detached, and ultimately too busy reading his Homer and Plato to notice football’s changing shape.

Conversely, Ramsey was always tinkering, always searching. He may have been a notorious xenophobe, but he certainly wasn’t impervious to foreign influence. Glanville portrays him as someone who had a more natural bond with his players, who had an instinctive distrust of the football media, but who was driven by a determination to find optimal solutions. He may not have encouraged particularly optimistic football – he was a pragmatist – but he was detail-obsessed in a way that, at last, allowed England to become reactive to surrounding trends.

Winterbottom is described now as a custodian, as someone in charge of something for which he bore little responsibility. Ramsey was his counter-point. He wasn’t afraid to make eternal enemies of the selection committee, so long as it gave him the opportunity to construct a team in his own image.

What’s interesting, though, is that he faced such opposition. By all accounts Ramsey could be cantankerous and difficult, but there was no sense that he was operating in an atmosphere which welcomed his experimentation. In other words, a decade on from the first of those defeats to Hungary, the native culture had not been significantly redefined. While it recognised the need for England’s evolution, it showed a strange distrust for any pursuit of that change.

Which really defeats this notion of a true sliding doors moment. Or, at least, the belief that change was catalysed by anything other than the actions of a group of individuals who were willing and forthright enough to challenge a status quo which, really, seems to have remained strangely intact. Hungary infused the curious and it was they who tore down the tenets of English football.