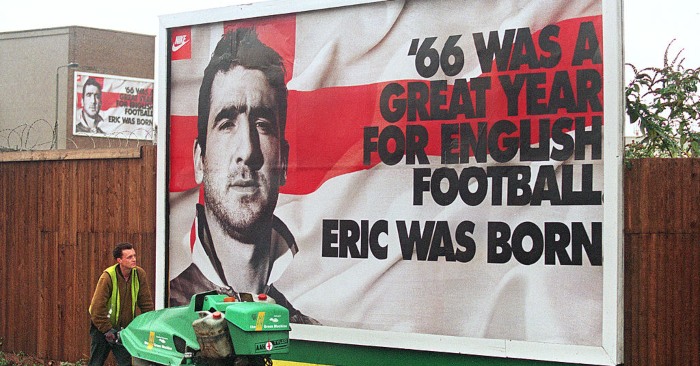 It would have been late July or early August of 1995. Mark Hughes, Paul Ince and Andrei Kanchelskis had all left Manchester United and I was sitting in a car driven by a friend’s father.

There were three of us in the back and we played football together on Sunday mornings. Arsenal, United, Spurs. The dad was a strange guy. An Arsenal fan like his son, he had a routine of prodding the United fan about his loyalties. Jokey stuff, mainly – have you ever been to Manchester etc – but, in retrospect, all a bit petty for an adult.

The boy got dropped off at home and as he was grabbing his boots from the footwell and moving to shut the car door, the dad leant back over his seat to have the last word.

“No Hughes? No Ince? No Kanchelskis?”

“Cantona,” said the boy triumphantly, shutting the door behind him. I’m sure I sneered. After all, that was the summer that Spurs signed Ruel Fox and Chris Armstrong and were about to begin their domination of the late 1990s. The kid was odd, too. He once turned up to a LaserQuest birthday in full Man United kit and, some time later, he took to wearing a t-shirt to Sunday football which celebrated the club’s third Premier League title. Every single week.

It’s the kind of made-for-article anecdote which sounds too perfect to be true. Most will remember it being the prevailing attitude of the time, though. It seems strange – Eric Cantona still had months of his ban to serve – but even before he re-emerged there was a definite sense, among ten-year old United fans at least, that everything would somehow be fine.

And history proves that correct; the anecdotes are legendary. The testimony of the Class Of ’92, for instance, and their descriptions of what playing with Cantona allowed them to be and feel, but also the second-hand stories, of young Beckham and Scholes out on The Cliff pitches until dusk, following an example which did not involve a barstool.

But what if it doesn’t happen? What if Howard Wilkinson never has the idea to try to re-sign Denis Irwin, Bill Fotherby never picks up the phone to Martin Edwards while Alex Ferguson is in his office (to stop him from signing Lee Chapman), and doesn’t then agree to sell Cantona for £1.2m?

What is the effect on Leeds, United and the footballing landscape?

Howard Wilkinson’s 1991-92 side were a strange beast. Even to this day, the perception is that they ended that season as champions by accident. True, Manchester United’s disastrous form across the final months of the season had allowed them to get over the line, but it remains a cruel devaluation of Wilkinson’s achievement. Four years after inheriting a side languishing near the foot of the Second Division, he had taken them to the very top of the tree.

Wilkinson was smart, too. A lot of the residual animosity left over from Don Revie’s era remained and, as he was entitled, he used that to his advantage. The product, over time, was a resilient team with an agricultural edge and a chip on its shoulder and, as has been proven time and again, those are valuable commodities in professional sport.

Cantona, it should be remembered, was a Leeds player for just nine months. It bears repetition because it seems impossible that he was such a fleeting presence. In the chapter which deals with Cantona’s departure in Anthony Clavane’s Promised Land, the author describes the forward as a transcendent figure. Quoting local journalists and fanzines, he writes of a player who was a vehicle for local expression at times, as someone through whom Leeds supporters were able to picture a new, collective identity.

‘They wore onions and berets to matches. When he scored he put his hands on his hips and stuck his chest out, like a Roman Emperor acknowledging the adulation of his subjects. The old Leeds anthem Marching On Together was rewritten as Marchons Ensemble.’

Given the brevity of his stay and the cameo nature of many of his performances, it’s a quite staggering effect. The obvious conclusion to draw, of course, is that – had he stayed – Cantona would have helped to harden that new self-perception. Perhaps more importantly, at the dawn of the Premier League age, when charisma and personality were soaring as currencies, Cantona’s magnetic swagger would have been in Leeds’ possession.

Translating that into any kind of material gain is impossible, but the mind does wander. Cantona was counter-culture, he was cool; imagine him in the same advertising campaigns, but wearing Leeds white and representing a different city. It’s tenuous, of course, but there’s a rough sum there, involving the Premier League’s growing visibility, football becoming more fashionable, and Cantona’s representative virtues.

The hidden element in that equation is probably the most important, though. Unlocking that latent potential would have depended on the continued success of the union. With Wilkinson in charge, that seems unlikely. It had taken less than a year for him to decide that Cantona, in spite of his ability, was a problem that he couldn’t manage. His famous quote of a player who ‘likes to do what he likes when he likes and then he fucks off’ is as descriptive as any and suggests that, had he stayed, the resulting acrimony would have prevented him from ever growing into the space he would occupy in United colours.

Wilkinson certainly imagined a different future. Cantona the personality was obviously not to his liking, but neither – evidently – were the range of attributes he possessed. In the summer of 1993, in an attempt to recalibrate a team who had finished 17th, Wilkinson signed Brian Deane from Sheffield United, pivoted to a 5-3-2 formation and attempted to create a more rigid order.

It wouldn’t be fair to claim that flair and exuberance were anathema to Wilkinson, but he certainly distrusted any ability which he felt unable to control. His team selections demonstrate that: the reliable centre-halves, the self-controlling midfield (McAllister, Strachan, Speed/Palmer), and the typical-of-the-time, little-and-large combination in attack). There were no risks, no real experiments.

The decision for Leeds United to sell Cantona was a mistake. The decision for Howard Wikinson’s Leeds United to sell Cantona, however, seems like the only rational conclusion. In 1994 and 1995 they recorded back to back fifth-place finishes. A fine recovery from 1993. It doesn’t work, however, to factor Cantona into either of those teams and conclude that they would have been better for it. Instead, over time and through deepening conflict with Wilkinson, he likely would have disturbed their functionality.

This is what Manchester United fans thought of Eric Cantona on the day he joined them from Leeds back in 1992! pic.twitter.com/nDiZgiVgm7

The Manchester United hypotheticals are less interesting. They’re no less pertinent, but they really draw themselves and have been written about many, many times before. Naturally, because Cantona’s effect was often so literal. But even the more subtle shades of his influence have been described by so many different first-hand sources, that exploring them further seems unnecessary.

What is intriguing, is imagining English football in the 1990s without Cantona. On the presumption that remaining at Leeds would have ended in acrimony and marginalisation, the first chapters of the ascendant Premier League might have read very differently. In 1992, for all intents and purposes, the game evolved from pastime to product and, to succeed, it needed to be sold properly.

It’s probably underestimated just what a gift Cantona was in that respect. In him the television companies had a star. Not just an excellent player, but a mesmerising personality who performed right on the edge of madness. Before Selhurst Park, there were times when he stepped on to the pitch in a black mood and then simmered for 90 minutes. His talent was never a prisoner of his temperament, though, meaning that his fury could manifest in all sorts of ways.

And, even now, that distinguishes him as arguably the most compelling figure in the Premier League’s history. Not the most talented, not necessarily, but the player, among all the many others, who had to be watched. Other brilliant players have had the capacity to behave badly, but never in quite the same ratios or with the same tone. Cantona’s game could be regal, but so could his mischief; he wasn’t – for instance – violent in the way that Roy Keane often was, or at least that wasn’t the perception. Even when he lost control, Cantona seemed to know what he was doing.

That was a powerful entity. As a Leeds United player, Cantona was talented and mercurial. At United, with the No.7 shirt’s lineage for gravitas, he became much more than that. He didn’t crave attention, but he still demanded it. He was mysterious yet ubiquitous, sometimes playful with his touches of the ball but always deadly serious behind the eyes.

The Premier League probably couldn’t believe their luck. And without him in that specific role, at the helm while one of the country’s great powers began to reappear, what else was there? Ability, certainly, traditional rivalries and everything that had made the game what it was prior to 1992 too, but nothing with such a strikingly modern appeal. Even people who didn’t like football knew who Eric Cantona was and, whatever their opinions about him may have been, such ubiquity is almost always good for business.

And that bears out in the financial results. The first broadcasting contract, which lasted from 1992 to 1997, was valued at £304m. Its successor, which ran from 1997 to 2001, more than doubled in value (£670m). There were myriad causes for that, but Cantona was – in his own way – certainly one of them. In fact, thinking back to that, the Premier League logo was practically inseparable from his image. How many adverts did he feature in, serving as a representative proxy for British football. How many Panini stickers albums did he front?

More importantly in this context, based on what how limiting the conditions at Elland Road were likely to have been and what his relationship with Wilkinson would most probably have become, would he have had the same power had he not joined Manchester United?

At the apex of his popularity at the club, after the last First Division title had been won, we actually know that he didn’t. One of the anomalies of that famous Premier League launch advert, with its Simple Minds, its centre-partings and its slightly homoerotic shower scenes, is that Cantona isn’t in it. John Wark’s there, Vinnie Jones too. But the power of Cantona’s image evidently hadn’t occurred to anyone who didn’t live in Leeds. It’s a nasty provincial bias, the kind which still lurks in news coverage today, but it was still real and relevant.

And one which, on the basis of Cantona’s likely trajectory at Leeds, would have altered the pitch of those first years. In a literal sense of course – nobody would know who Matthew Simmons was, Keegan’s Newcastle would be remembered for winning a title rather than his notorious rant, and maybe the Class Of ’92 wouldn’t have become their own brand – as he was an obvious catalyst of the competition’s rise, but also because the butterfly effect of that phone call between Edwards and Fotherby permanently changed the local atmosphere.