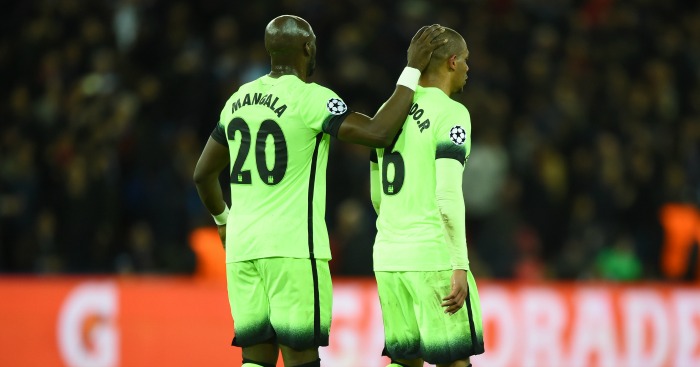 Pep Guardiola spent his post-match press conference on Tuesday evening praising Benfica’s backline as “the best in Europe”, but there should be no doubt about the weakest defence left in this season’s Champions League. Manchester City enjoyed a successful night in Paris, but their defensive Achilles’ heel continues to undermine their attacking prowess.

In the space of three first-half minutes, Eliaquim Mangala had allowed Blaise Matuidi to steal in behind him and was fortunate not to concede a penalty, Nicolas Otamendi had gifted Zlatan Ibrahimovic a shot at goal, Gael Clichy had dived in on the touchline and been booked and Bacary Sagna had fouled David Luiz in the penalty area. Luiz did not so much draw the foul as sit it down and sketch it before getting out the watercolours, but Sagna was still guilty. Only the brilliance of Joe Hart kept it goalless.

Think these are isolated incidents? Think again. Otamendi’s passing accuracy in the first half was 60%, Mangala’s 56%. Sagna and Clichy dived into challenges both before and after the break, while no City defenders bothered covering the posts for a second-half corner from which PSG took the lead. The home side scored twice, and could have had at least three more. Ibrahimovic’s shooting was unusually wayward.

Not that City’s defensive shambles is restricted purely to their defenders. Against Manchester United last month Martin Demichelis redefined the term ‘ineptitude’. In Paris, fellow South American Fernando tried to push the bar even lower.

City’s attacking prowess is regularly undermined by their defensive malaise, but never has it been more explicit than in the 41st minute. A Joe Hart pass found Fernando on the edge of his own box. Rather than passing the ball to the waiting Sagna or back to his goalkeeper, the Brazilian attempted to play the ball across his own goal, gifting Ibrahimovic the simplest of his 443 career goals. Listen carefully and you could hear Danny Baker and Nick Hancock calling Fernando a “daft plonker”.

Mercifully for City’s hopes of European progress, Paris St Germain were just as calamitous. Luiz continued his parody central defender act, while Blaise Matudi’s profligacy in possession allowed Kevin de Bruyne to give City the lead. Both Thiago Silva and Serge Aurier had a hand in Fernandinho’s second-half equaliser.

Incredibly, given the lax performances, the transfer fees of the four central defenders on show was the highest in the history of the game (£35m Thiago Silva, £50m Luiz, £32m Otamendi, £42m Mangala). It really didn’t show.

Manuel Pellegrini’s admission of defensive weakness come at least once a month. “Maybe, maybe we are conceding some goals where we have to be more concentrated,” City’s manager said in January. “We defended very bad,” he said in February. “It is important to arrange some problems in the way we are defending,” was March’s missive. By early April, another difficult watch for Pellegrini. It has been the hallmark of his tenure.

This piece may seem overly negative, given the result. Yet scoring twice away from home should be enough for victory; City’s wonderful attackers deserve better than this. A penalty save and the crossbar stopped City losing a game they should have won. Next time they may not be so fortunate.

Hart, De Bruyne, David Silva, Sergio Aguero. There ends the list of those City starters who you would want in the team next year, with Otamendi worth a show of faith too. That’s the upheaval facing Guardiola this summer.

Some of that work will have to be postponed, but there is no doubting the priority. This Champions League run has taken Manchester City down an untrodden path and that journey could still continue, but there is no paper thick enough to cover these defensive cracks.