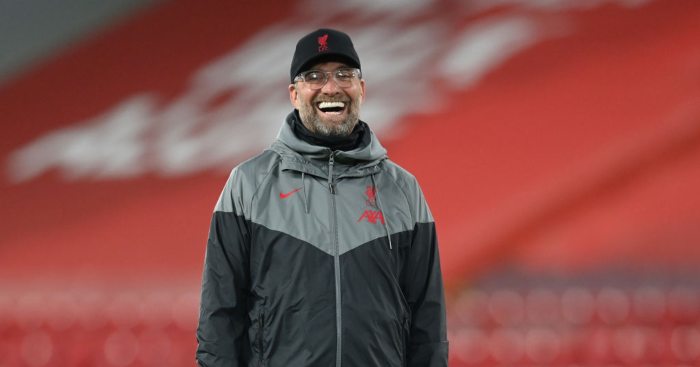 Tests are set to reveal the extent of Fabinho’s injury but it will almost certainly leave Klopp with Joe Gomez as the only senior centre-back for this weekend’s Premier League clash with West Ham.

FEATURE: Time for Gomez to stand up as wounded Liverpool soldier on

However, Lallana reckons his former boss will “love” the “test” of winning matches with a depleted squad.

“He won’t use anything as an excuse, he’ll say it’s the same for every team,” Lallana told BT Sport. “He’ll say, ‘we’ve got the squad to adapt and deal with it’.

“He’ll meet the challenge face on, the lads will be in tomorrow and they’ll recover and he’ll pick a team to beat West Ham. Okay, it’s going to be a test but it’s a test that he’ll love and the lads will get together and help each other out.

“Coming from the underdog region he likes that. So there’ll be a little bit of him that will enjoy this test and he’ll be fired up for it.”

The Reds’ latest defensive setback came around the half-hour mark when Fabinho – playing at centre-back again in the absence of Virgil Van Dijk and Joel Matip – had to be substituted having pulled up while running.

Asked if Matip could be available for Saturday’s home clash with West Ham, Klopp said: “I don’t know, we have to see”.

Fabinho was replaced by 19-year-old Rhys Williams, who made his fourth senior appearance for Liverpool and is yet to play in the Premier League.

Klopp said of Williams: “He did really well. The only problem we have now is we have four days to the West Ham game and you will make every day a story of him and then he has to prove he can deal with that as well, because the vibe was calm around him.”

Weighing up other options from the fringes of his squad, Klopp also mentioned Nathaniel Phillips and Billy Koumetio and said: “We have very young and inexperienced alternatives, and at the moment it looks like we have to choose one of them.