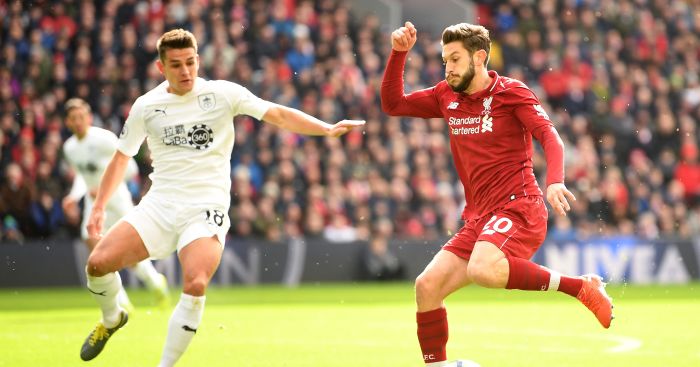 It was less an explanation, more a defence designed to placate a pitchfork-wielding social media mob. “If you have five sessions a week, everybody can show up and Adam was exceptional during the week,” said Jurgen Klopp. “So, in a situation where you think a little bit how you can adjust one or two things, it’s smart.”

Liverpool supporters were not alone in thinking it was anything but. Adam Lallana‘s introduction for the final six minutes of an insipid Merseyside derby last weekend felt like the moment his Anfield career jumped the shark. A player who once typified Klopp’s revolution had been consumed by it.

Yet this 30-year-old with more injuries than goals or assists over the past two years still has a part to play. Sunday’s comeback win over Burnley was forged not from irresistible attacking, determined defending or sensational skill, but pure energy and hard work.

Few players epitomise that more effectively than Klopp’s favourite adopted son. “I am not sure how many games you saw like this from Adam Lallana?” said the German after his first game in charge, a 0-0 draw away at Tottenham in October 2015.

“What do you think? I know him from Southampton and he can do 20-30 per cent more,” Klopp added, having cradled an exhausted Lallana in his arms upon his substitution in the 81st minute. The midfielder had set the example, providing inspiration through perspiration.

History repeated itself almost three and a half years later. With Naby Keita and Xherdan Shaqiri both consigned to the bench once more, Lallana’s inclusion against Burnley was an unpopular one. One of the Premier League’s most difficult defences cannot be unlocked by a plethora of Cryuff turns, and the two summer signing substitutes seemed like they were better suited to the task at hand.

Yet it benefited Lallana to start a game and help dictate its pace rather than being introduced towards the end of a frenetic, disjointed match. His skillset does not lend itself to making an immediate impact in five minutes as a substitute; he is not the sort of player to stretch a tired defence with pace or power. Lallana is at his best when he does not have to sprint out of the blocks.

It felt as though Lallana would only exacerbate the problems a nervous Anfield posed. But those nerves turned to anger within six minutes. Ashley Westwood’s corner floated into Alisson’s net unaided, with the Brazilian goalkeeper effectively pinned down and trapped by a gaggle of Burnley players led by James Tarkowski. It was a clear foul that went unpunished by Andre Marriner, but it eventually worked in Liverpool’s favour.

It gave them – the players, the fans, the manager – something to concentrate on, a lightning rod and focal point to relieve the pressure and distract from their suffocating Premier League title hopes.

Lallana, among many, prospered. It was his cross-field ball that led to Roberto Firmino’s opener. Mohamed Salah was found unmarked on the right-hand side and exchanged passes with Georginio Wijnaldum before squeezing a delivery through the Burnley defence and to a thankful Firmino a couple of yards out.

But Liverpool’s second goal was Lallana in excelsis. Another attack seemed to have been stifled, with Phil Bardsley aiming a clearance as high and as far as he could manage. But the lost cause was chased down, and Lallana launched himself into the ball’s path to divert it first to Salah and then Sadio Mane. It was a sensational intervention, the most potent example of attack being the best form of defence. Liverpool led.

They closed the game out from there, Firmino and Mane both adding to their tallies either side of a Johann Berg Gudmundsson injury-time goal. But Lallana was the architect of this crucial victory.

Before the game, his inclusion was met with derision. This was a player who has one goal and no assists in the Premier League since January 2017, starting in a must-win match for a title contender. Yet the fact that statistic remains the same sums up Lallana – the tireless worker who lays the foundations for others to thrive.

Four players had more shots (1); three created more chances (2). Yet none made more passes in the opposition half (51), nor made more tackles (4). His performance set the tone for Liverpool’s substitutes in particular, with industrious captain Jordan Henderson leading the way for ball recoveries (8) despite playing just 22 minutes.

By the time Lallana made way for Keita with the final quarter of an hour remaining, the critics had been confounded. After last week’s class in mismanagement, Klopp’s “smart” decision has kept Liverpool in this title race.