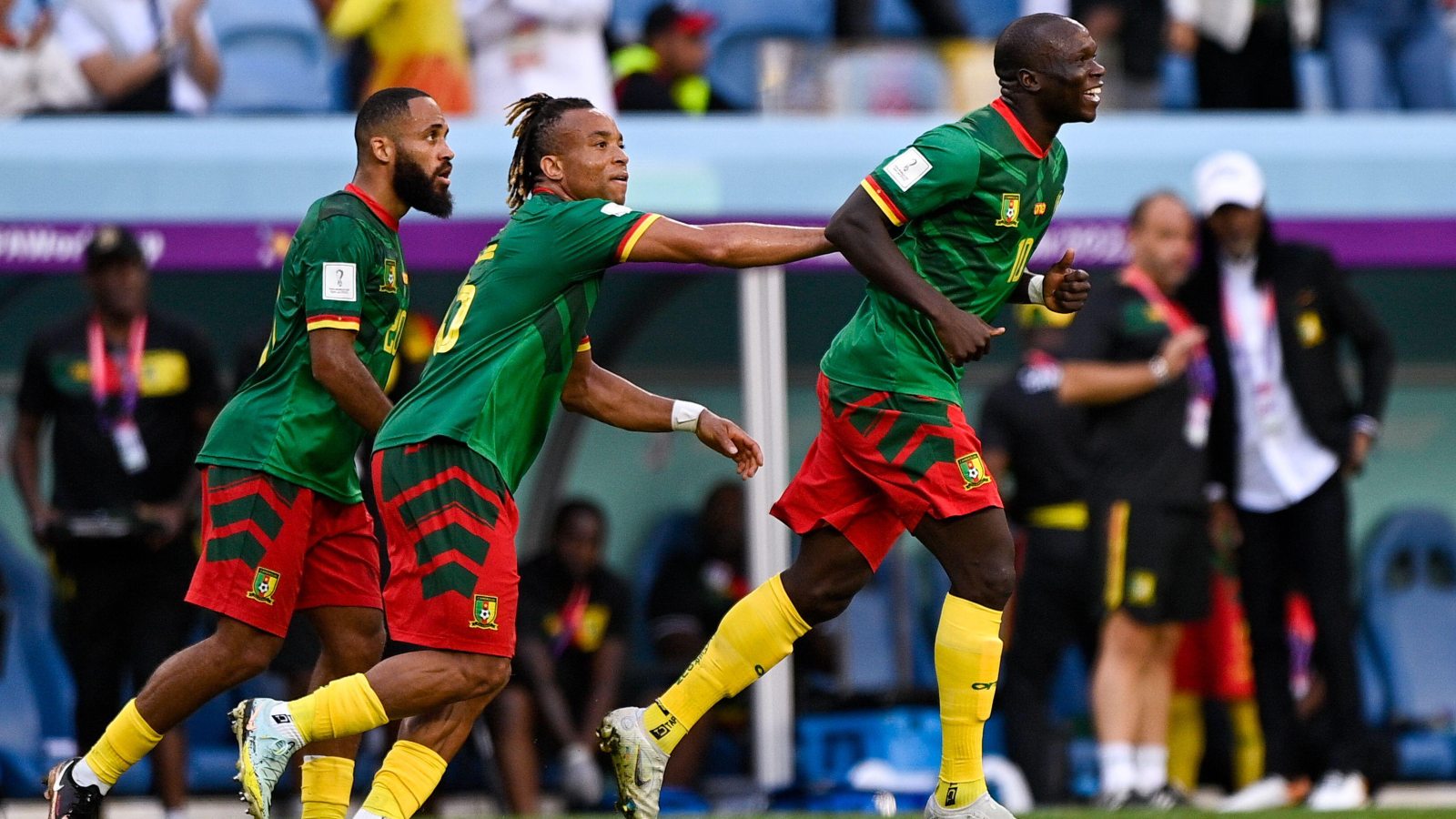 The consensus is that this is a great World Cup and Cameroon v Serbia is a case in point. Has everybody forgot it’s in Qatar now?

It’s been a bloody good World Cup
Have to disagree with Big G. I’ve enjoyed the World Cup so far. Yes, there have been some drab games, but also some great ones. Iran v Wales was brilliant. Poland v Saudi Arabia was very enjoyable. I didn’t see Canada v Croatia, but it sounded pretty entertaining. Watching Spain thrash Costa Rica was fun. France v Denmark was good, as was France v Australia. Pretty harsh to criticise Portugal v Ghana because the 5 goals all came in the 2nd half. And if you can’t enjoy Saudi Arabia v Argentina, just because Argentina were not at their best, football isn’t for you.

I think people massively suffer from rose tinted glasses when looking back at previous World Cups. You remember the good games and you forget the dross, of which there is quite a lot. Even 2018, fondly remembered as a good World Cup had some pretty dire games. Eventual winners France scored 3 goals in the group stage!

There have been some flat atmospheres this year, but also some incredible ones. Argentina v Mexico and the games involving Tunisia, Iran, Saudi Arabia & Morocco as some of the examples.

The group stage is always just the warm up. We’ve had some good games so far and I fully expect some crackers up ahead.
Mike, LFC, London

…I have to agree that this WC is so far quite entertaining.

For European viewers, the matches are on at great times, and for me there is less of a guilty feeling that I should be out in the sun rather than watching football. A winter WC is what my new ManCave was built for!

Also, there have been a few shocks, some close games and not much is settled going into the last round of matches.

Ahead of the last round of 2nd group stage matches today, only one team (France) have definitely qualified, and only two (Qatar, Canada) are eliminated.

In 2018 there were already six teams who had already qualified, and eight who knew they would be home before the postcards arrived. Indeed, all four semi-finalists last time were able to rest players in the final round of matches.

One thing which seems to have helped (whether by accident or design), is that in six of the eight groups, the top two seeds have (or will) meet each other in the 2nd match, so there is much less scope for them playing out a convenient result.

They have both needed to try and win, since nothing was already decided. I still remember 2010 when what could’ve been a great match between Portugal and Brazil turned out instead to be a 0-0 training match, since that was good enough for both.

And actually, one of groups where it didn’t happen (Group F) might throw up a cracker with Belgium knowing that a draw is very unlikely to be enough against Croatia (who themselves know defeat would probably send them out). It should make for a lot of exciting matches in the next 4 days.

My only worry is that the Qatari rulers might get so sick of all the negative publicity, they just decide to shut the whole thing down and tell everyone to leave town immediately, now that they’ve been eliminated!
Michael

It’s not been great but there are mitigating factors
Big G wrote in this morning posing the question if this has been the best or worst World Cup ever, it is one of those questions that will come down to what an individual sees as a good game or even a good tournament, so far we have had at time of writing we had 28 games played, yet only 13 had a goal in the first half, now this could be put down to the heat out in Qatar but the players don’t seem to be putting in 100% effort and you cannot blame them after all did any of us in the UK put in 100% effort during the 38 degree Celsius heat we experienced this summer?

Looking through BIG G’s questions this is my take on them all:

“The players look absolutely shattered, nearly all of the atmospheres have been drab. I can’t think of a worse tournament other than maybe 2010 in South Africa. Can anyone think of why this might be?”

The heat is a big factor, as mentioned earlier in my mail, plus the players havent had a break like they did for other international tournaments, they went from league action into international action.

We’re constantly told that players struggle at tournaments because they are coming off the back of a long hard season, which isn’t the case now. It’s hot, but is it THAT hot?

32 degrees Celsius and low humidity on most days will drain players out quicker, again could any of us run around for 15 minutes without needing a break in such heat let alone 90+

Group stages I find can be quite boring, it is when we get to the knockout rounds things start to pick up, hopefully 2022 will do exactly that.
The Admin @ At The Bridge Pod

Wait, Big G is back…
I wrote into the Mailbox complaining at how bad the quality of football had been so far. It was half time in the Belgium v Morocco game. Yet another goalless and turgid first half of football. Every pass and every touch were comically bad. I support a League One team and honestly the standard was similar. After sitting through game after game of this type of dross in the last week I was reaching my wit’s end. Surely the next game will be better. OK, OK, but NOW it’s going to get good…. Isn’t it?

In the three and a half games since that moment, Morocco steam rolled Belgium to a deserved victory; Croatia rolled back the decades and produced a vibrant attacking display against an excitable, but naive Canada team; Spain and Germany played out a tense and edgy, but high quality match; and now Cameroon and Serbia have just pulverised each other and given us the game of the tournament so far.

I don’t know whether I should be eating humble pie and apologising, or if everyone should be thanking me for obviously awakening the footballing Gods from their slumber and livening things up!

Either way it seems, the World Cup has finally got going. FOOTBALLLLLLLLL.
BIG G

I think this is decent but can anyone else do better? I have picked one person per country and gone for more recent players). Don’t need a holding midfielder with that defence. Will score lots of goals.

ST: Zlatan Ibrahimovic (goal machine, won trophies everywhere he’s been, some in poorer teams). Could have been Lewandowski.
Tom

World-class doubts
Six months ago I wrote in with the following – If Pogba (or any player) has 50% of doubters he should take that as fairly conclusive that he’s not the player he and his agent think he is.

Please use the same equation for Ronaldo this season. Yes we all have a blind spot for former great players, but every football fan’s opinion is valid and if there’s enough noise that someone isn’t the player others believe then there’s probably a lot of truth in it.
Barry White

Spain show England how to have fun
Looking at Spain’s 4-3-3 formation, which has Rodri as a CB and employs 3 scurrying, technical, easy on the eye midfielders is the equivalent of Declan Rice replacing Maguire at CB and picking a midfield 3 of Bellingham (DM) and Foden/Maddison as double 8s. I’d like that. Have a little fun Gareth: international football is supposed to be fun. We won’t lose 4-0, I promise…
Rob S

While you can argue all day about whether the West has an issue with alcohol, drugs or “sexual practices” you have got your key point completely wrong: “Qatar has chosen its rules. Russia did in 2018”.

Sorry but seriously??!!!! Australia and NZ are both well established democracies: if their people wanted to change the rules on drugs, alcohol or anything else they could vote for the party that aligned with their views. Or even stand for parliament themselves.

Who sets the rules in Qatar? You have no knowledge as to whether the Qatari (or Russian) people like their rulers or their rules bit they are powerless to change them.

Absolute nonsense mate
Andrew, BRFC in Nottingham (if brackets are still a thing: that Germany goal last night was the definition of a thunderb*stard)

…In Australia if you want to take drugs and be a man who kisses another man dressed as a kangaroo, you can.

In Australia if you don’t want to take drugs and be a man who kisses another man dressed as a kangaroo that’s fine.

In Qatar if you want to take drugs and kiss a man THEY WILL BEAT YOU AND PUT YOU IN JAIL.

Get a f**king grip you melt.
Tim Sutton (Mitro)

…Oh and to all those Lynx-scented Joe Rogan t-shirt wearing muppets telling F365 and her readership that objecting to holding our World Cup in a modern-day human rights hell is hypocritical:

If FIFA were to award the 2030 World Cup to slave trading empire Britain in the 1700s THEN YOU MIGHT HAVE A POINT ABOUT HYPOCRISY IF I DIDN’T COMPLAIN.

Just accept you care about football and don’t care about human rights abuses and the deaths of workers and anything but what you like and stop attempting to paint everyone else with your greasy lack of character to make yourself feel better.

We are not the same.
Tim Sutton (Mitro)

Stop channelling Bush or Blair
I can’t be bothered to write anything too long, but isn’t Rob just simply a racist?

Qatar is a majority Islamic country and Rob wants to force western values on it, which is an interesting line of discussion. So here’s another for you:

US and UK forced western values on another majority Islamic country called Iraq. Remind me how that went?

I’m just saying if you continue to get on your alarmist, self-righteous, western high horse about other countries, then you’re no better than George W or Tony Blair. Of course I don’t agree with what happens in Qatar, it’s why I don’t live or visit there. There is nothing I can do about it except create more hate and anger, so I don’t. Live and let live.

I can see a rainbow…
Credit to the Iran team for not singing to their national anthem in their opening game. An incredibly gutsy protest, given the possible repercussions. Credit also to the Germans for the hand-on-mouth gesture, albeit with no jeopardy.

However, I have a humble, simple suggestion.

How about (no howaboutery please), instead of all the teams singing along (or not) with their respective national anthems, they all sing “red and yellow and pink and green, purple and orange and blue..etc”?
Imagine it.

That’s six goal contributions with the second round of group games not even finished. Is any other Premier League club’s players having as much of an influence on the World Cup as Spurs?

I will mail in another update at the end of the group stages with our latest total.
Barry Fox