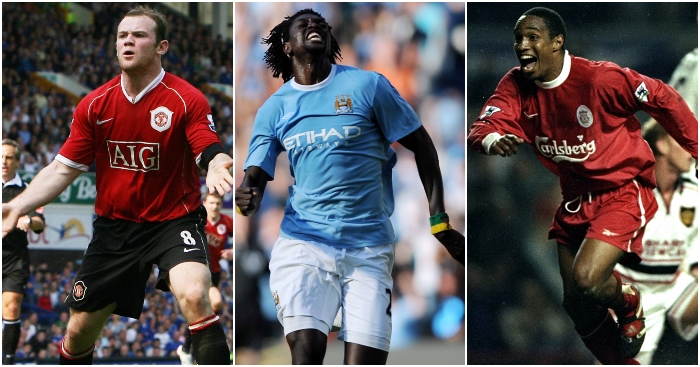 With Edinson Cavani, Ander Herrera and Angel Di Maria all keen to prove a point to their former clubs, we remember five players who binned the muted celebration in favour of sticking it to their old sides…

Emmanuel Adebayor
The genre-defining celebration came in September 2009, a couple of months after Arsenal sold Adebayor to nouveau-riche Manchester City for £25million. The fourth game of the season saw the Gunners head to City for a reunion with the striker who deserted them to take up the offer of a five-year deal worth £150,000 a week.

Adebayor tells a different story. He said in 2018 that Arsene Wenger ‘told me I had to leave because he didn’t see my future anymore at Arsenal’. Then Wenger told the press the Togo striker had moved for the money, which caused him to ‘hate’ his former club.

Which was evident immediately after he headed in Shaun Wright-Phillips’ cross to give City a 3-1 lead with 10 minutes to go. Adebayor embarked upon a pitch-long sprint straight towards the spewing Arsenal fans before dropping to his knees to drink in their bile.

“I’m very sorry, I’ve done a big mistake,” said Adebayor after the game in a futile, half-hearted effort to swerve an FA charge, but the suits could have doubled or tripled his subsequent two-game ban and £25,000 fine and it would still have been a price well worth paying.

Adebayor was more forthcoming a decade later. “I was being abused by people who six months ago were singing my name,” he explained last year. “The abuse was for no reason. It wasn’t my fault I left, it was Arsene who wanted to accept the offer for me.

“If you were to abuse a man in the street for over an hour he would react and it would be a worse reaction than a goal celebration.”

Carlos Tevez
Tevez crossing the Manchester divide was seen as huge coup for City and they milked it for all it was worth. As did Tevez himself when he got the chance…

The Argentina striker had already been back to Old Trafford earlier in the 2009-10 season but Michael Owen stole his thunder. When the two sides were paired in the League Cup semi-finals, and Tevez scored City’s opener from the penalty spot, he gave it the big one as he ran past Gary Neville towards the United bench. Neville’s crime was to have backed the club’s decision not to keep Tevez.

Tevez wasn’t done. He scored again in the second half to give City a great chance of going to Wembley for the first time in 29 years and again his instinct was to stand before Sir Alex Ferguson and the directors’ box to reinforce the point that United were wrong to let him go.

United won the second leg, triumphed in the final then came back to the Etihad to win the league derby on their way to the title.

But Tevez feels his point was made.

“Football is a form of theatre and it was just a form of banter,” he explained. “There was nothing malicious intended. I was not trying to incite anyone but I was entitled to say to Neville that he should have been more respectful.

“For the second goal I ran to the touchline and cupped my ears and looked up to the part of the ground where the United directors were sitting, and also to Ferguson in the dugout, because I wanted them to know this was my response to them saying I was not worth the money.

“People from United have been speaking about me publicly and criticising me but I wanted to do my talking on the pitch because that was the best way of responding to all these people, such as Neville, who were saying United were right to let me go.”

David Luiz
The Brazil defender was between Chelsea stints when his PSG side arrived in London for a Champions League last-16 second leg. The first ended in a 1-1 draw and when Zlatan Ibrahimovic was sent off in the first half, the Blues looked good for a place in the quarter-finals.

Things looked even rosier when Gary Cahill put them ahead with nine minutes remaining but David Luiz had other ideas. The PSG defender out-jumped Branislav Ivanovic in the 86th minute to power a header past Thibaut Courtois and take the tie to extra-time.

Eden Hazard put Chelsea back in the lead but Thiago Silva, now of Chelsea, followed Luiz’s lead by heading home a corner to send PSG through on away goals.

Luiz, at this point blissfully unaware that he would be heading back to Chelsea, apologised for having the temerity to enjoy scoring a vital goal.

“I was very happy at Chelsea, I respect everyone,” he said. “Tonight was good for me to score. I said I wouldn’t celebrate but my emotions I couldn’t control.

“Thank you to Chelsea and sorry I celebrated because I was so emotional.”

Wayne Rooney
‘Once a Blue, always a Blue’ read the message on Rooney’s t-shirt when he netted for Everton in the FA Youth Cup final. To be fair, as barrel-chested as he was even as a schoolboy, there simply wasn’t room to add ‘except when you’re a Red’.

To Evertonians, his £25.6million move to Manchester United was a betrayal and since no ground in England does angry quite like Goodison Park, they always let him know whenever he came back with the Red Devils.

But he enjoyed his next trip back to Goodison even more, especially since it looked like it was going terribly wrong. In April 2007, with United chasing a win that would go a long way to helping them secure the title, they trailed 2-0 until John O’Shea and Phil Neville’s own-goal drew Ferguson’s side level.

United then sniffed blood and, inevitably, it was Rooney who completed the turnaround. With 10 minutes remaining, he sat down Tony Hibbert before slotting the ball past Iain Turner.

Rooney goaded the home supporters on his way to the Bullens Road stand, where he kissed the United badge while limbs flailed around him.

“It was just a pure reaction to the Everton fans,” Rooney told Gary Neville on Sky Sports some years later. “I was gutted after the game when I done it, but it was a big moment.”

Not gutted enough to avoid doing the same thing a year later.

Many United fans were gutted in 1995 when the club sold Ince to Inter Milan amid a clear-out to make room for the Class of 92. Then they were fuming when the England midfielder returned home but not to Old Trafford. Ince joined Liverpool…

Ince was used to burning bridges. West Ham fans had never forgiven him for posing in a United shirt before his move to Old Trafford was complete in 1989. And if there was any hint of lingering affection for Ince at Old Trafford, even after Ferguson labelled him a ‘f***ing big-time Charlie’, he torched it in April 1999.

Absolutely love this: Fergie sitting his Man United team down for a pre-match meeting in a 1998 documentary, outlining how to deal with Liverpool — especially Steve McManaman and 'Big Time Charlie' Paul Ince. pic.twitter.com/JRPT4bzAr6

United were then going full-tilt for three trophies and they led 2-0 at Anfield. But Liverpool pulled one back and United were reduced to 10 men. Then, with four minutes remaining, a loose ball fell Ince’s way in the United box.

“I remember the ball going into the box and I just ran forward,” he reminisced with the Evening Standard. “In front of the Kop, last minute, it was perfect.

“I’d always wanted to score in front of the Kop, and with Fergie and what he’d said, I just enjoyed it so much – and rightly so.

“I never understand not celebrating because you’re playing against your former club. You play for these fans now. They pay your wages. It was an unbelievable feeling to do that.”

United got over it just in time to win the Treble.