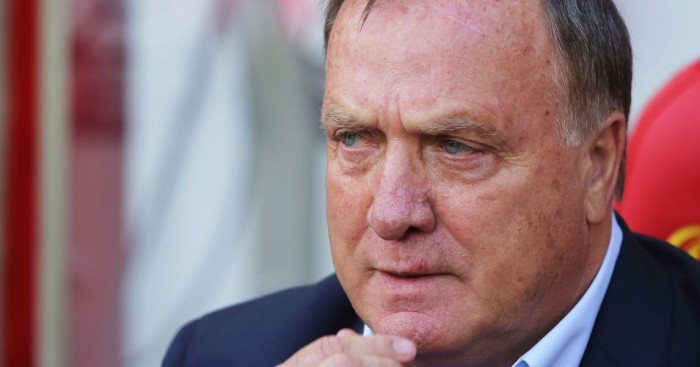 Dick Advocaat admitted the late defeat to Spurs was “disappointing”, but the manager insisted he was happy with Sunderland’s performance.

The Black Cats were the better side for much of the afternoon at the Stadium of Light on Sunday, testing Spurs on a number of occasions and hitting the post twice through Jermain Defoe and Jack Rodwell.

Ryan Mason’s late goal with eight minutes remaining condemned Sunderland to their third defeat in their opening five games however, with the Black Cats rooted to the bottom of the Premier League table.

Advocaat insisted he was satisfied with the performances of his players however, telling Sky Sports that they deserved at least a draw.

“It’s a disappointing result, but not disappointing the way we played. You could see a big difference in the approach to the game of our team.

“But you are playing against a very good side like Spurs, a lot of good individuals, and the few chances you get, you have to score a goal out of that.

“I think we deserved more than nothing, but you don’t always get what you deserve.

“I have also said to the players, ‘This game, we have to take the positive things out of it. If you give this spirit, it will get you points as well’.

“We knew we had to play against a very good side in Spurs.

“It cost us a little bit more energy than the opponent because individually they had some very great players. We do as well but you can see physically some players need a bit more.

“I’m very happy with the way we worked. If you see the determination from the team and the way they like to play, I think the crowd were really excited about it.

“I think the crowd liked the way we played. It’s a really attractive way of playing, only we did not get the points we deserved.

“Again with all respect to Spurs – they have a really good side, but I think one point was for us a good result.”