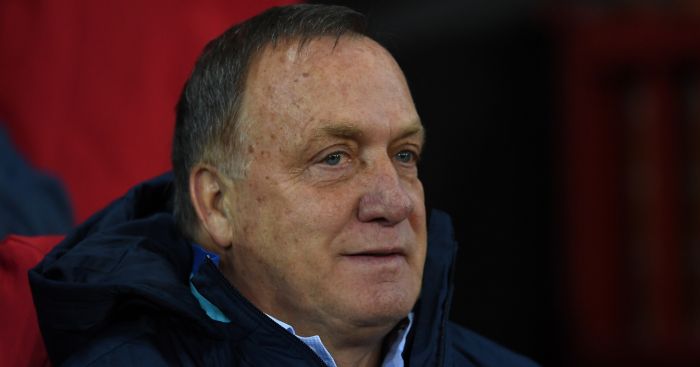 Dick Advocaat has been named Holland coach for the third time, with Ruud Gullit as his assistant.

The Dutch Football Association (KNVB) confirmed the appointments at a press conference in Zeist on Tuesday morning.

The announcement sees former Rangers and Sunderland boss Advocaat, who turns 70 in September, become his country’s oldest national coach, usurping Guus Hiddink who was 68 when he left the hot-seat in June 2015.

Hiddink’s successor Danny Blind, who was unable to lead the team to Euro 2016, was sacked in March this year in the wake of their World Cup qualifying loss to Bulgaria.

The Oranje have suffered two defeats in their opening five Group A games and sit fourth in the pool, already six points behind leaders France and three behind second-placed Sweden.

KNVB technical director Hans van Breukelen believes Advocaat, who is currently employed at Turkish club Fenerbahce, is the right man to get the Dutch back on track for next year’s showpiece tournament in Russia.

The former Holland goalkeeper, quoted by www.vi.nl, said: “I welcome the appointments of Advocaat and Gullit.

“There were two scenarios. We opt for the longer term or we do everything that is possible to get to the 2018 World Cup.

“We chose the second scenario. It had to be a very experienced professional, preferably an authority.”

Interim boss Fred Grim will remain in charge until Advocaat and Gullit join together, which looks likely to be when Fenerbahce’s involvement in the Turkish Cup is over.

“It is unfortunate that Dick Advocaat cannot join up with us until later, but it is as it is,” Van Breukelen said.

Van Breukelen revealed a foreigner as coach had been “a possibility”, but that the final three candidates on the list were all Dutchmen – Advocaat, Huub Stevens and Henk ten Cate.

Ten Cate, who is currently coach of Al Jazira in the United Arab Emirates, had claimed he was promised the role only for the offer to be withdrawn.

“I’m surprised that Henk had the feeling that he would be (named head coach),” Van Breukelen said.

“Henk also knew that I could talk to Dick.

“The moment Fred Rutten dropped out of contention as assistant, it was clear that Henk ten Cate would not be (head coach).

“I’ve never been to Ten Cate and said he would be coach. I was surprised by his press statement.”

Advocaat has had two previous stints as national boss, from 1992-1994 and 2002-2004, and three as assistant, including most recently last year. Only Rinus Michels has had so many spells in charge.

Former captain Gullit, 54, won the last five of his 66 caps towards the end of Advocaat’s first tenure, before a dispute over tactics in the build-up to the 1994 World Cup signalled the end of Gullit’s international career.

Advocaat led Holland to the quarter-finals of the 1994 World Cup in the United States, where they lost to Brazil, and to the semi-finals at Euro 2004, at which they were knocked out by hosts Portugal.

As well as an impressive CV in European club football, and his Holland roles, the well-travelled 69-year-old has managed the United Arab Emirates, South Korea, Belgium, Russia and Serbia.