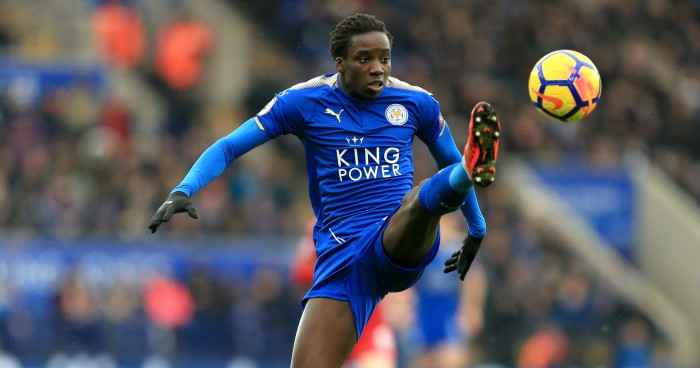 Last week the head of recruitment at a Premier League club was sacked for derogatory remarks about African footballers: among other things, he said they “cause mayhem”. In response, it seems only right to celebrate the arrival of a couple of new Africans to the Premier League. They’re January transfers who got their first league starts last Saturday, and who caused considerable mayhem- in the opposition camp, of course.

First up is Badou Ndiaye of Senegal and Stoke City, born in Dakar and now residing somewhere in Staffordshire. He’s 27, with eight caps for his country and stints in Norway and Turkey, and was acquired from Galatasaray for a not-at-all-negligible £14m.

He came with a reputation as a lively all-around midfielder. Before moving to Istanbul, he had played mostly in an advanced role, scoring a goal every three or four games. At Galatasaray, however, he found himself pushed deeper, at times even playing as a holding midfielder. He posted decent tackling numbers (although his tackle percentage was ordinary) and committed a fair few fouls. Gala felt they had better options in attack, and £14m was a nice price for a solid but not exceptional DM.

And so to Stoke City, and his first chance to impress, as a right-footed player on the left of a midfield three against Bournemouth.  And impress he did, right out of the gate. In the fourth minute he made an excellent run to the by-line to take a pass, and put in a cross requiring keeper intervention. One minute later he lifted another cross so perfectly that Xherdan Shaqiri, the smallest man on the pitch, could head home for the opening goal.

In the rest of the match we got a good look at Ndiaye’s playing profile. With good pace, balance and ball skills, it’s no surprise he’s posted fine dribbling numbers in the past. He’s effective driving forward, although once he dribbled somewhat aimlessly into the corner. He also gets a plus mark for trying a bicycle kick in the penalty area, and for working himself into a half-chance from just outside the box, scuffing it with his weaker foot.

As a passer, the news is all good. He completed 82.4%, mostly short passes, playing simply and sensibly. The cross for Shaqiri was the gem of the lot, but elsewhere he found the nearest teammate and generally looked to push things forward.

Defence? He was bypassed a few times, but showed good positional discipline. And although he excelled mostly while moving forward, he tracked back with a vengeance, once picking up a yellow card in the process.

He left in the 71st minute after tiring, but on the whole, it was a fine debut. He certainly looks at home at this level, and although Stoke probably still could use a goalscorer, Ndiaye should be one of those helping to create the chances. Next week the Potters host Brighton in a huge match, and he’ll undoubtedly be in the starting XI.

Unlike Ndiaye, who was playing his very first match for Stoke this past weekend, Fousseni Diabaté had already featured for Leicester City: once in the FA Cup at League One Peterborough (a stormer, two goals), and once in the league (second-half sub at Everton last Wednesday). But unlike Ndiaye, he might not have played in the league at all if it weren’t for a small personnel problem by the name of Riyad Mahrez.

In fact, Diabaté was a very different kind of signing, not an immediate starter for a team fighting relegation, but a potential prospect for a club on the rise. He’s only 22, and his professional experience had gone no higher than the French second division. (You may remember that was also true of Mahrez.) How did Leicester spot him? It helped that Claude Puel’s son was his teammate at Ajaccio. His price was a minuscule £1.8m.

But 122 league minutes later, he’s got his feet under the table, and we can expect him to be dining at the King Power on a regular basis. He didn’t make much of an impact in the Everton match, but on Saturday at home to Swansea City he showed exactly why Leicester felt it was worth a punt on an obscure Mali youth international attacker.

Diabaté is left footed, and against Swansea he started on the right wing, in the Mahrez role. Unfortunately, his only mark for the first 25 minutes or so was a physical one, a booking (and nearly a straight red) for a poor challenge on Sam Clucas.

But suddenly he found his feet. Now over on the left, he played a good one-two with Jamie Vardy, which led to an attacking throw-in.  Another combination followed, this time with Christian Fuchs. Shortly afterwards came a third, this time with Kelechi Iheanacho, and Diabaté broke through on the left side of the area and hammered a shot that Lukasz Fabianski did very well to parry. In fact, Iheanacho should have scored on the rebound.

Clearly Leicester had themselves a player. In the rest of the match he pounced on loose balls, started counter-attacks, played effective combinations, ran at defenders to draw fouls, and looked every bit ready for the Premier League. When Ihenacho was subbed off, he shifted to the second striker role for a while, and so finished having played right, left, and centre.

It wasn’t a perfect performance: he was dispossessed too easily once or twice, and will have to learn to mark a bit better. But there seems no doubt of Diabaté’s talent. He has outstanding pace, and although he can twist and turn a bit, he doesn’t over-elaborate. He looks the most dangerous with direct running and passing, which should suit Leicester’s system just fine. At this point it may be asking a bit much to take a consistent starting role, but he should figure in several more line-ups before the season is out.

So a big welcome to Badou Ndiaye and Fousseni Diabaté, Africans and footballers. The league is lucky to have you – and may your minutes and mayhem increase.