Home F365 Features After Kepa…four other players who refused substitutions 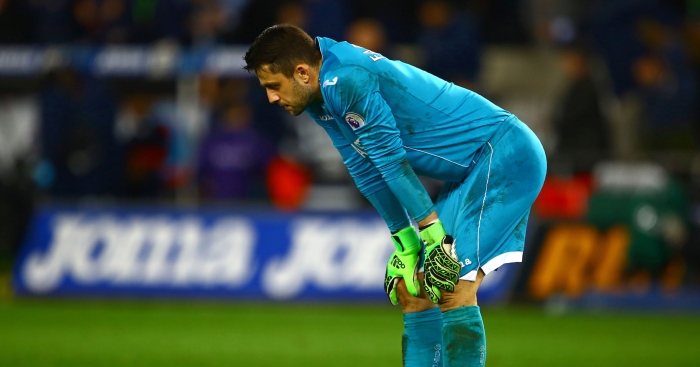 Chelsea keeper Kepa Arrizabalaga refused to come off in the final minutes of the Carabao Cup final in what appeared to be a stunning act of defiance against manager Maurizio Sarri. Chris Sutton claims he should never play for the club again, in the most Chris Sutton of responses.

But while his actions shocked those watching, they were not unprecedented. Here are four other examples…

Lukasz Fabianski (Swansea)
The most clear comparison came in 2017 when Swans keeper Lukasz Fabianski was hurt late in their match against Tottenham, colliding with Vincent Janssen in the 81st minute. As a stretcher was readied, manager Paul Clement told reserve Kristoffer Nordfeldt to get ready. Fabianski insisted he was fine and play resumed, but the goalkeeper continued to hold his rib, even as he made a fine save to deny Dele Alli.

Clement made the decision to replace Fabianski and his number went up in the 86th minute, but Fabianski refused. After continued remonstrations, Clement turned to the fourth official to cancel the change, and Jon Moss – the man in charge of Sunday’s Carabao Cup final – waved play on. It was not the end of the story, however, as Fabianski let in three goals in the final minutes of an extraordinary match, turning a 1-0 lead into a 3-1 defeat.

Remember when Fabianski refused to be substituted for Nordfeldt under Clement, in the 85th minute and then this happened!? pic.twitter.com/VzudbPpw7G

Carlos Tevez (Manchester City)
Roberto Mancini accused Carlos Tevez of refusing to come on as a substitute for Manchester City in their Champions League match against Bayern Munich in September 2011. Tevez denied ignoring his manager’s instructions, blaming the incident on a misunderstanding. Nevertheless, it would be the start of a lengthy stand-off between the pair which saw Tevez banished from the club for five months before returning to play a dramatic role in them securing the Premier League title.

Nikola Kalinic (Croatia)
Croatia striker Nikola Kalinic was sent home from last summer’s World Cup in disgrace after Zlatko Dalic said he had refused to come on as a substitute in their group match against Nigeria. Dalic said Kalinic had claimed he was not fit to play, but that was not good enough for the manager, who pointed to a string of similar incidents in the past. The 31-year-old, capped 41 times, has not played for his country since.

In Croatia's 1st group game vs Nigeria, he refused to come on as a sub because his ego felt he was better than being a sub.

The next day he was sent home.

Croatia are now in the World Cup final while he's sitting at home.

Les Sealey (Manchester United)
Kepa is not the first goalkeeper to refuse to leave the pitch during a League Cup final, but Les Sealey’s actions in the 1991 Rumbelows Cup Final earned praise, not scorn. The Manchester United goalkeeper suffered a badly gashed knee with 12 minutes remaining, but knowing there was no reserve keeper on the bench, he refused to have an outfield player replace him in goal and limped through the remainder of the match. He conceded no further goals, though John Sheridan’s 37th-minute strike was already enough for Sheffield Wednesday to lift the cup with a 1-0 victory.

Don’t recall all this fuss when Les Sealey lost his shit and refused to go off in the League up final.