Home F365 Says After Pepe, Arsenal are one signing away from perfect summer… 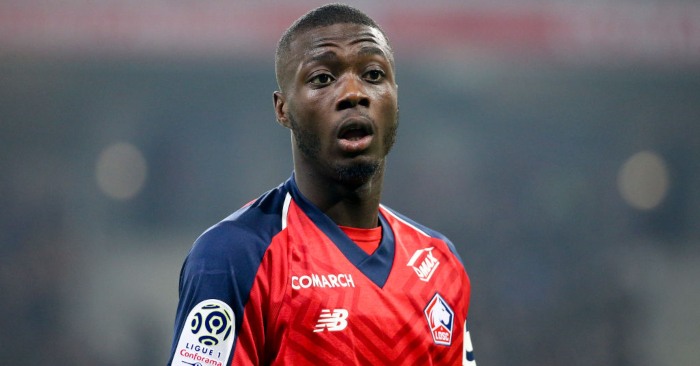 ‘ZAHAHAHA’ was the back-page headline as The Sun laughed heartily at the notion that Arsenal would offer to pay for Wilfried Zaha over FIVE YEARS. We know we are supposed to find it preposterous because they put the FIVE YEARS in capitals. The subtext was – as has become the norm over the last decade – ‘let’s all laugh at Arsenal’.

Less than a month later, Arsenal have offered to pay for Nicolas Pepe over FIVE YEARS, Lille have accepted and the Gunners have secured the biggest Premier League signing of the summer so far for a down payment of just £20m. Let’s all laugh with Arsenal because they have pulled off a phenomenal deal.

This was the summer when Arsenal had a laughable budget of around £45m, supposedly restricting them to kids, free transfers and loan deals. With Pepe through the door, they will have signed three players for this season – a kid, a loan deal and an, erm, club-record signing – and another to arrive in 2020, and still have money left in a budget that could yet be boosted by sales, with Laurent Koscielny and Shkodran Mustafi on the wanted list of various clubs across Europe. If they can get just one Premier League-ready centre-half through the door in the next week – with left-back Kieran Tierney a sweet bonus – then they have made a lovely silk purse out of a sow’s ear.

This signing makes a mockery of the notion that Arsenal are a spent force, that three years out of the Champions League somehow wipes out the previous 19. For the vast majority of 24-year-old Pepe’s life, Arsenal have been a force in Europe. And even post-Wenger Arsenal have a strong French presence, with Pierre-Emerick Aubameyang and Alexandre Lacazette both speaking Pepe’s language; to borrow a word from that same language, Arsenal do still have cachet to anyone not subjected to a decade-long ‘let’s all laugh at Arsenal’ thread in the media, both mainstream and social. Where some undoubtedly see a joke club that has dropped below Tottenham, from afar they look like a massive club who twice finished within one victory of the Champions League in one pretty decent if ultimately fruitless season.

Arsenal walked in and said Bonjour Pepe, Le Professor Arsene Wenger and away with Pepe 😂😂

Unai Emery had made it clear that he was only interested in signings that “really, really improve the squad”, which is a pretty big ask on a meagre budget. But in Dani Ceballos, they have signed ‘a wonderful fit for that Aaron Ramsey-shaped hole in midfield’ and in Pepe they are signing an immeasurable upgrade on Henrikh Mkhitaryan, Mesut Ozil, Alex Iwobi or any other middling option crowbarred into a wide-right position; now all they need is an upgrade on Mustafi – and that really should not be too hard to find.

Make that signing and this has been an astonishingly good transfer window against all the odds. With minimum investment – less than an Aaron Wan-Bissaka, if you will – this could be Arsenal’s best squad for FIVE YEARS.