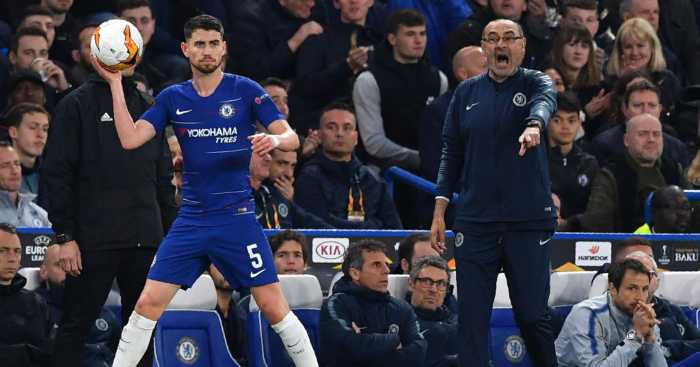 Jorginho is open to reuniting with former Chelsea coach Maurizio Sarri at his new club Juventus, according to the player’s agent.

The Blues confirmed over the weekend that Sarri had left the club in order to return to Serie A with Juventus.

The Italian brought Jorginho with him to Stamford Bridge in a £57million deal, where he won the Europa League in his only season in charge.

However, not Sarri has left, Jorginho’s agent, Joao Santos, admits that it’s possible that the Italy international could leave Chelsea this summer.

“Chelsea have a four-year contract with the lad,” Santos said. “We’ll wait a few days to figure out whether there is any truth in this interest.

“His past at Napoli won’t be an issue, because Jorginho is a professional.

“Right now, Jorginho is happy at Chelsea. He found a great atmosphere and we can’t really say that he’d like to go elsewhere, but anything can happen on the transfer market. We’ll wait and see…”