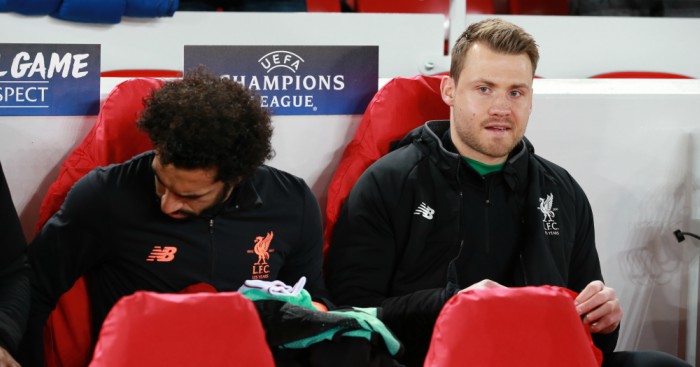 Simon Mignolet‘s agent has played down his chances of leaving Liverpool in January.

Mignolet has found his playing opportunities at Liverpool limited this season, the Belgian playing just one game in all competitions.

Liverpool’s early exit from the League Cup has restricted his already slim chances of finding a way past summer signing Alisson.

A number of Turkish and French clubs have been linked with the Belgian, but he is likely to stay at Anfield until the summer at least.

“We have to be realistic,” Nico Vaesen told ESPN FC. “There are not many good possible transfers in January, especially not for a goalkeeper.

“Circumstances have to be right for everybody. If something is to happen in January, it will be very difficult to do something. If Simon goes or could go in January, Liverpool have to look for a replacement as well.

“So I understand from a club’s point of view that it’s not easy to do. In that respect, we know each other’s problems. We’ll see how and when we can solve them.”

On links to Patrick Vieira’s Nice, Vaesen added: “It’s all paper talk. I don’t know where the stories from Nice and everywhere came out.

“It’s not because I go to a game – Monaco v Brugge – and I’m spotted in Nice and that I’m speaking on behalf of Simon that he goes to Nice. I’ve heard and read all sorts of comments regarding speculation about Simon.

“So yes, in that respect, we have been looking and will continue to be looking for a solution for Simon. That’s obvious. I’ve had some talks with Liverpool about it. We know what we can do and can’t do. They know what we want to do.

“There is not a difficult or frustrating situation for everybody. The only frustration is that Simon doesn’t play. That’s all.

“That’s something we want to address. Liverpool is aware of that Simon has that ambition to play. Obviously, they are very happy to have two No. 1s, but you can only play one. You can’t hold that situation for much longer – that’s for sure. That’s something they realise as well.

“When and to where Simon will leave, let the future determine that because a lot of things can happen between now and the end of the season.

“We’re open for everything, but everything will be done in a good relationship, constructive talks and understanding with Liverpool.

“We quietly hope that there will be some games for Simon in the next couple of weeks and that Jurgen Klopp will reward Simon for his professionalism and his positive attitude with a game here or there. That would make a big difference for Simon.”