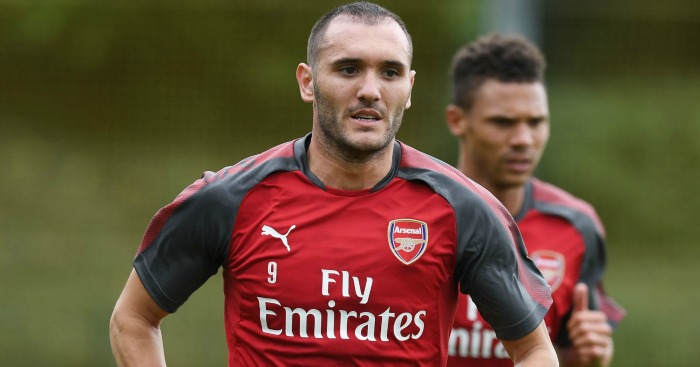 Lucas Perez could be edging closer to the Arsenal exit door after his agent claimed former club Deportivo La Coruna have tabled a bid for the forward.

The 28-year-old moved to the Emirates Stadium from Spain last August for a fee reported to be in the region of £17million.

However, Perez has found his chances severely limited, starting just twice in the Premier League and making nine starts in total.

The former Dynamo Kiev frontman suffered a thigh injury in March, but even when he returned to full fitness he failed to make a single match-day squad, before being named as an unused substitute for the FA Cup final win over Chelsea.

That means his last appearance came off the bench in the sixth-round FA Cup win over non-league Lincoln on March 11.

Perez was expected to leave this summer even before the arrival of club-record signing Alexandre Lacazette, who also took the number nine jersey from the Spaniard.

Now Perez’s agent, Rodrigo Fernandez Lovelle, has told Press Association Sport that Deportivo have made an offer to take his client back to the Riazor less than 12 months after his departure, as the uncapped striker targets an international call-up.

“I’m here to see the Emirates Cup and to be with Lucas,” Lovelle said of his arrival in London.

“We have talked to everyone. Arsenal know we want to go, that there are no opportunities here, and within a year there is a World Cup.

“Would you not be angry and sad and upset if you had your squad number taken without being asked?”

The offer from Deportivo is believed to be worth more than the reported nine million euros (£8.1m) that LaLiga rivals Sevilla paid Manchester City for Nolito, with Lovelle insisting Perez was offered plenty more play-time after signing in 2016.

“Deportivo made an offer a week ago. It is a permanent deal and worth more than Nolito’s move to Sevilla,” he said.

“Of course (he was told he would play more). Lucas signed for Arsenal and was the happiest person in the world and with all of his dreams to fulfil.

Gunners boss Arsene Wenger spoke of Perez’s situation towards the end of last season while his own future at the club was up in the air.

The Frenchman has since signed a new two-year deal but looks set to allow Perez to leave despite his wishes to keep him in north London.

“If I am the manager I would love to keep him but we have to sit down and see if he has a realistic chance to play,” he said in May.

“He’s a top quality striker but I couldn’t give him the games he wants and deserves, I confess that. I feel a bit sorry for him.”