Vertonghen was substituted early in the second half of Spurs' defeat to Southampton. 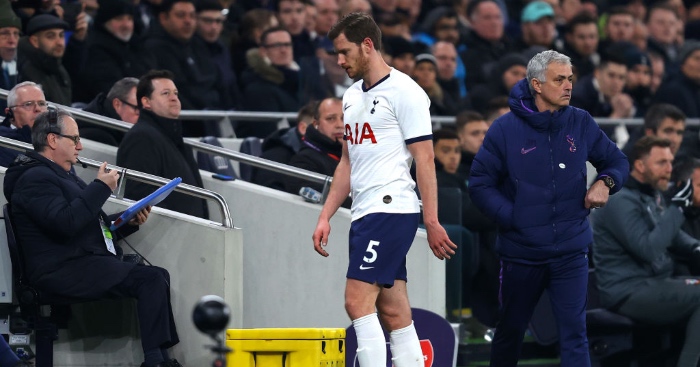 Jan Vertonghen’s agent Tom De Mul has insisted the 32-year-old still has a future at Tottenham after the defender’s reaction to being substituted in the 3-2 FA Cup victory over Southampton.

Vertonghen was replaced by Jose Mourinho in the 54th minute with the score level at 1-1, and was noticeably devastated as he took his place on the bench.

This sparked many to question whether Vertonghen’s Spurs career was coming to a close, with his contract up at the end of the season.

But speaking to HLN Sport De Mul said his client was simply disappointed with his display in the game.

“He’s feeling better now,” De Mul said. “His reaction had nothing to do with his future. He was just disappointed when he got subbed off.

“Jan still wants wants to achieve great things with Spurs. He wants to qualify for the Europa League or Champions League, to win the FA Cup.

“He is 32, but still very ambitious. He is focused. He still has so many targets. The European Championships are a super important goal too.”

It remains to be seen whether Vertonghen is offered an extension to his current deal at Spurs, but De Mul said he would be content to stay at the club.

“That’s logical after eight seasons. There is a connection.

“We haven’t reached an agreement as yet, but we don’t rule out anything.

“There’s interest in him as a free agent, but Spurs is a very interesting option for us. The door’s still open.”