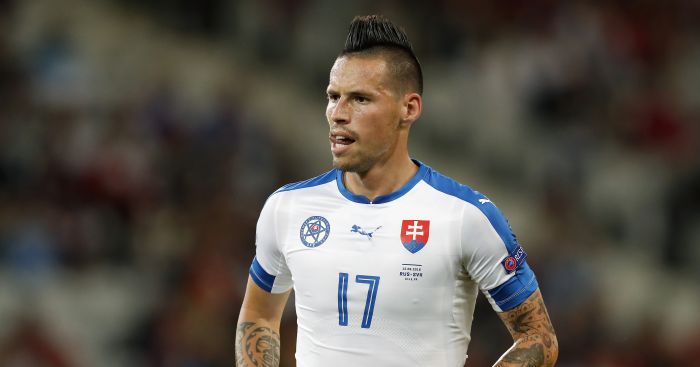 Marek Hamsik’s agent has revealed that the midfield star is set for contract talks with Napoli amid reported interest from Premier League sides Chelsea and Manchester United.

The 28-year-old Slovakia star, who has been one of the shining lights at Euro 2016 scoring a wonderful goal in the recent win over Russia, has come on to the radar of the Premier League duo, according to talkSPORT.

Chelsea and United are reportedly keen on Hamsik, who played in every Serie A game last season, scoring six goals as the Naples club finished second to secure a place in the Champions League.

However, the Premier League duo’s interest may be shortlived after the player’s agent revealed he will soon sit down for talks with the Italian club.

“Maurizio Sarri [Napoli manager] is important for Hamsik who is having the best time of his career,” Juraj Venglos told radio Crc.

“He’s done very important work with Napoli this year and his form is continuing now also with Slovakia.

“Marek is already at a big club and in the coming days I will meet Aurelio De Laurentiis [Napoli president] and Cristiano Giuntoli [sporting director].

“The hope is that the meeting goes well but I cannot say more because we haven’t yet talked – I cannot be precise.”

Hamsik, who is heading into his 10th season with Napoli, is under contract until 2018 and made 46 appearances in all competitions last term.