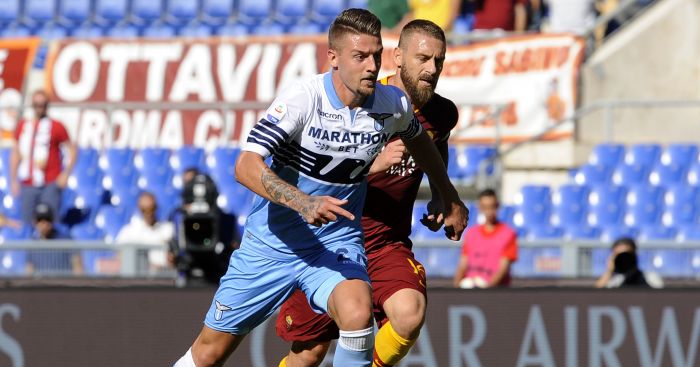 Sergej Milinkovic-Savic’s determination to help Lazio reach the Champions League was the reason behind his failure to move clubs over the summer, according to his agent.

The Serbian was heavily linked with a move to Manchester United with Chelsea, Manchester City, Barcelona, Real Madrid and Juventus all credited with some interest in Milinkovic-Savic.

Since remaining at the club, the 23-year-old has committed to the Serie A side until 2023 after penning a new deal at the Stadio Olimpico.

And former Chelsea striker Mateja Kezman, who represents Milinkovic-Savic, has revealed the reasons for the midfielder staying in the Italian capital.

“He played an exceptional season and virtually all the biggest European clubs were interested in him.

“We never pushed for the move because Milinkovic was determined to stay one more year to help supporters, team-mates and the club reach the Champions League goal.

“As an agent, I am happy that there is still a season [at Lazio].”

“There were many voices during this summer, I must say, in spite of myself, that many were completely unfounded.

“I have never seen so much false news published and reported.

“There are people who, in order to appear in the newspapers, are ready to give false information.

“As said Lazio has a project, has a plan, have shown their power by keeping Milinkovic in Rome with the consent of the boy.

“This is why we have known for a long time that he would remain.”