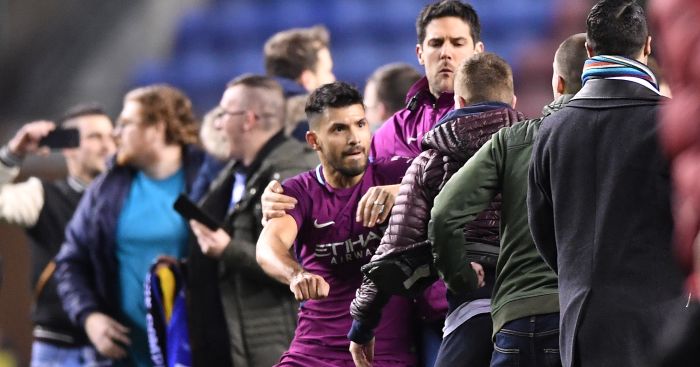 Both Wigan, who won the game 1-0, and City have been charged by the FA for failing to control their players following Fabian Delph’s dismissal in the first half at the DW Stadium.

However, it is understood the FA will not charge Aguero for an incident that occurred on the pitch after the final whistle, when TV footage appeared to show the City striker raising his arm to push away a fan who had confronted him.

It is believed the governing body has reminded Aguero of his responsibilities, but it is also mindful of the situation City’s all-time leading scorer found himself in after thousands of fans spilled onto the pitch following Wigan’s win.

The FA is also understood to be taking no disciplinary action against players and staff from either side for the heated half-time row involving City boss Pep Guardiola and his Wigan counterpart Paul Cook.

The pair had argued on the touchline following Delph’s dismissal and television pictures showed Guardiola having to be restrained by colleagues in the tunnel, yet the FA is thought to be satisfied that no misconduct took place.