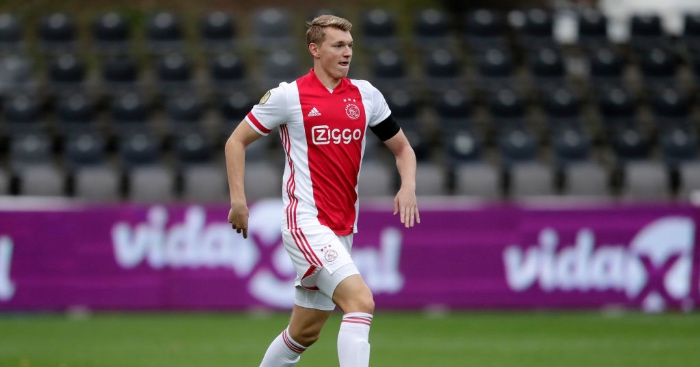 Liverpool will need to pay at least €30 million (£26.7m) if they want to sign young Ajax defender Perr Schuurs, according to reports.

The Reds were first linked with the 20-year-old at the start of November following injuries to several defenders.

Virgil Van Dijk is set to miss the rest of this campaign, while Fabinho is only just back in training.

Schuurs emerged as a target for Reds officials to improve their centre back options for the future.

According to Italian source Sempre Milan (via the Liverpool Echo), Ajax have now told Liverpool their asking price.

The €30 million fee being cited is good considering the player’s potential.

Schuurs has already been likened to Juventus wonderkid Matthijs De Ligt due to his playing style and size.

The report states that Liverpool face competition from Italian side AC Milan for the player’s signature.

Schuurs first came to prominence during the 2019/20 campaign, when he played in the Champions League for the Dutch club.

He’s since played against Liverpool in this season’s competition, which the Reds won 1-0.

Schuurs was impressive during that match and didn’t seem to be overwhelmed by Liverpool’s front three.

He is a calming presence at centre back, similar in a way to Van Dijk.

Standing at 6ft 3in, Schuurs is also a threat from set pieces.

Schuurs could be brought in to provide boss Jurgen Klopp with extra options.

The German has suffered since selling Dejan Lovren in the summer.

Injuries to Van Dijk, Fabinho and Joe Gomez mean they are currently relying on the inexperienced Nat Phillips and Rhys Williams.

Joel Matip is their only senior centre back, which could cost them in their next few games.

Schuurs is one potential signing alongside Dayot Upamecano from RB Leipzig.