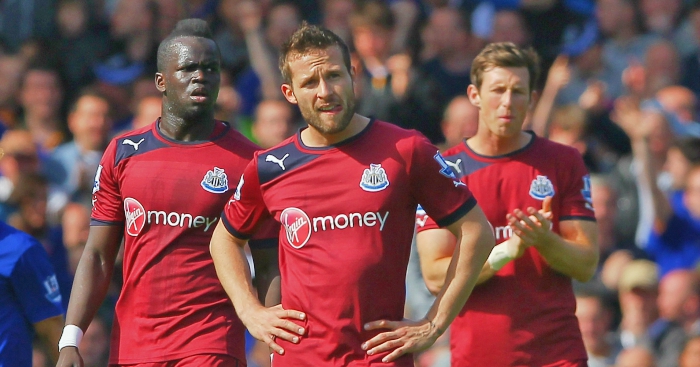 Which players have featured most often in the Premier League under Alan Pardew? And who else completely forgot about the existence of No 5?

5) Mike Williamson (102 Premier League appearances over five seasons)
The clues were that the player is 34, currently fails to get into Oxford’s first team, and was once accused by John Carver of purposefully getting himself sent off in a defeat to Leicester in May 2015. Additional information includes a six-year spell at Newcastle, and a Wikipedia entry that dubiously claims he ‘specialises as a centre-back’.

Yet even with those hints, it was a struggle to remember the forgettable Mike Williamson, who was a staple of Pardew’s Newcastle side from 2010 to the manager’s 2014 sacking. Williamson somehow missed just five games of the 2013/14 Premier League season, and edges out Jonás Gutiérrez and Shola Ameobi (both 94 games) on this list.

4) Cheick Tiote (105 PL appearances over five seasons)
“I’m devastated to hear the news about my former player and friend Cheick Tiote,” said Pardew upon the death of the midfielder in June of this year. “From the moment I arrived at Newcastle, Cheick was a wonderful presence around the dressing room and his performances on the field often defied belief.

“I loved him. He was everything that you want in a Newcastle player. He had the quality, and of course you’ll never underestimate the fact that he wants to win.”

Chris Hughton signed him for £3.5million, but few would argue that Tiote’s greatest success as a player did not come under Pardew. The equalising goal in the 4-4 draw with Arsenal in February 2011 lives long in the memory.

3) Tim Krul (118 PL appearances over five seasons)
Krul, to be kind, was once one of the most underrated goalkeepers in the Premier League. The Dutchman struggled to break into the first team initially, but finally worked his way into contention upon Newcastle’s promotion in 2010. His time under Pardew was similarly difficult to begin with: he started the manager’s first three games, but was dropped for the next 13.

The 29-year-old took his chance, shrugging off the interminable challenge of Steve Harper to establish himself under Pardew. He did not miss a single Premier League minute of the club’s successful 2011/12 campaign, and provided two assists in five seasons under the 56-year-old. So that’s something.

2) Fabricio Coloccini (120 PL appearances over five seasons)
The man who was supposedly in line to replace Pardew as Newcastle manager in December 2014 was one of his most trusted lieutenants. Made captain of the club in the summer of 2011, Coloccini ended that season by being named in the PFA Premier League Team of the Year, alongside such luminaries as Scott Parker and Joe Hart. The Argetinean was so good in fact that, after helping the Magpies to a 1-1 draw in a Wear-Tyne derby in October 2012, Pardew once said: “That was like watching Bobby Moore. It was that good.”

Everyone looking forward to Gareth McAuley being compared to Franco Baresi after a hard-fought 1-1 draw with Burnley in March?

1) Yohan Cabaye (127 PL appearances over five seasons)
It had to be. Pardew has managed only three players in the Premier League at two different clubs, and Ameobi and Jerome Thomas (14 games) do not come close to the French magician. Only Papiss Demba Cissé and Demba Ba scored more goals under the pineapple connoisseur, and no player notched more assists.

Cabaye enjoyed a glorious two-and-a-half seasons at St James’ Park under Pardew before leaving to join Paris Saint-Germain, but the two were reunited once more in the summer of 2015 at Selhurst Park. With the January transfer window just a month away, will West Brom provide the funds to make it a hat-trick?