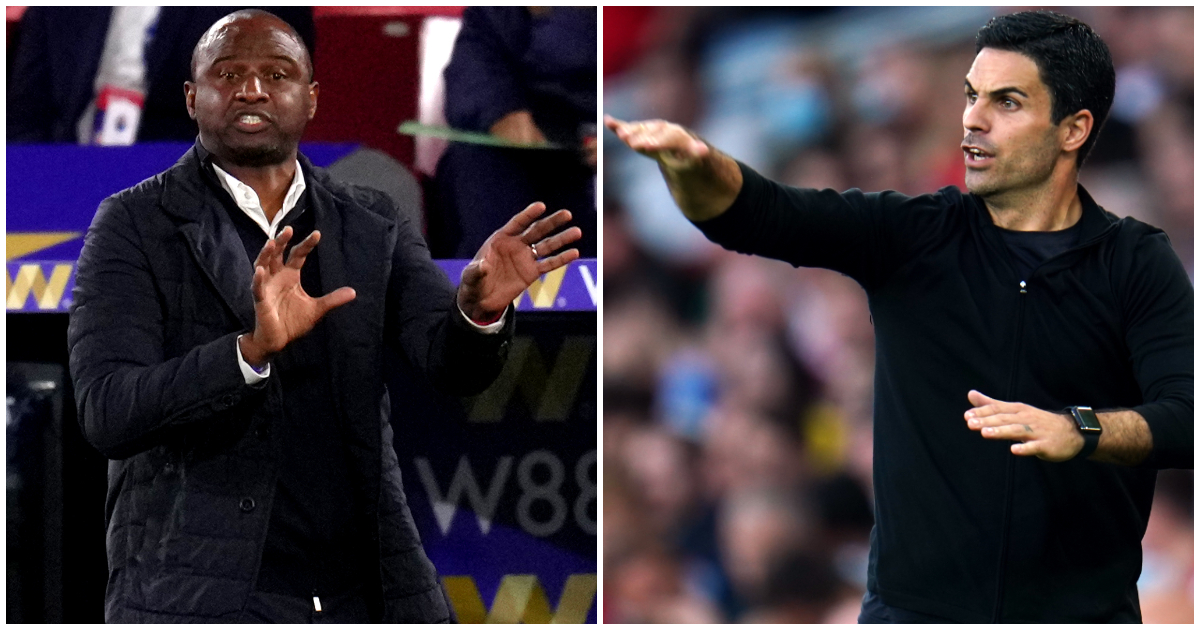 Alex Keble explains how Patrick Vieira can stop Arsenal and how Mikel Arteta might counter.

Only the most reactionary of football fans can have been impressed by a page-turning moment under Mikel Arteta but ready to scoff and look away after a 0-0 draw with Brighton a fortnight ago. So most people, then.

Pundits and supporters groaned at the difficulties Arsenal had at the Amex, forgetting that Graham Potter’s side are one of the best in the country and impatiently assuming the Gunners should now be on an unstoppable upward trajectory. It will take time for the improved performances to become consistent and for the results to put them back in contention for the Champions League places. But the green shoots are still there.

Crystal Palace have slipped under the radar so far this season thanks to a relatively modest points tally of seven from seven games, but Patrick Vieira’s team have been unlucky in a number of matches and their displays suggest they will be pushing for the top ten this season. Monday night’s game at the Emirates is a tricky one for Arsenal yet few will see it as such. It is, therefore, a recipe for more lazy hot takes should the result not go in the hosts’ favour.

Neutrals, at least, ought be able to take a step back and really enjoy this one. Vieira’s first professional visit to the Emirates (Arsenal were still at Highbury when he left for Juventus in 2005) is the headline story but a distraction, really, from the fact we are seeing two tactically advanced teams coming together at an important juncture in their development. It should be a fast-paced game defined by a gritty midfield battle and some pleasingly direct attacking play at both ends.

In these early weeks of the season Palace matches have been characterised by a central midfield trio of Conor Gallagher, James McArthur and Cheikhou Kouyate snapping into challenges and bursting into the final third; the two eights, Gallagher and McArthur, are helping to lead a high press and ensure Palace have plenty of bodies in the penalty area.

43% – Crystal Palace have had fewer shots on target than any other Premier League side this season (14). However, they’ve scored six goals, with only Brentford (50%) having a better shots on target to goals ratio than the Eagles this term (43%). Punishers. pic.twitter.com/pFqWwd87ys

Palace have notably won the midfield battle against Tottenham and Leicester recently, badly disrupting the passing rhythm of their opponent by tackling aggressively in the central third of the pitch. Vieira has managed to squeeze the space between the lines very well, refusing entry for any ball-playing team that wishes to pass out from the back. Per FBref, only Southampton have applied more pressures this season (160 per game).

They will be confident, then, of reducing Arsenal to tame passing in a U-shape across defence – or pinching the ball from them in midfield and tearing forward. Certainly this is Arteta’s biggest challenge and the key battleground of the game, because if the hosts can successfully build through – as they did so well against Tottenham, but poorly against Brighton – then they will find space in front of the Palace defence to exploit.

Most likely, Arteta will again play Thomas Partey and Albert Lokonga at the base of midfield with Martin Odegaard and Emile Smith Rowe, from central attacking midfield and left wing respectively, dropping to the sides of midfield to provide that forward-passing option. Clearly this is less dynamic than utilising Odegaard and Smith Rowe as Guardiola-esque free eights, but it would be a mistake to leave the in-form McArthur and Gallagher to press a sole Arsenal defensive midfielder.

Much will rest on whether Partey and Lokonga – both effective press-evading midfielders at their previous clubs – can work together in this game to pin Crystal Palace back.

Should Arsenal be on form then the greatest threat to goal comes via Bukayo Saka linking with Odegaard on the right, where Arsenal are increasingly leaning in attack thanks to the addition of the defensively solid Takehiro Tomiyas. He helps swing the Gunners into a back three, giving licence to Saka to drive into the final third, which he should do with success on Monday considering Wilfried Zaha rarely tracks back on this side. Tyrick Mitchell has a lot to do.

As for Palace, their goal threat is on the opposite side. Michael Olise changed the game from the bench in the second half of their 2-2 draw with Leicester prior to the international break, his trickery complementing Zaha from the other side and causing havoc in a clumsy Foxes defence.

There is more dynamism at Arsenal than in the Caglar Soyuncu and Jannick Vestergaard partnership, but if Arteta’s side are not up to the speed and aggression of Palace’s midfield press the whole team will likely be timid, withdrawing into themselves and becoming vulnerable to the directness of Zaha, Olise and Odsonne Edouard.

Which is to say this ought to be a very enjoyable game of football, defined by a tactical battle in central midfield that will, in turn, inform the psychological readiness of both sets of players.