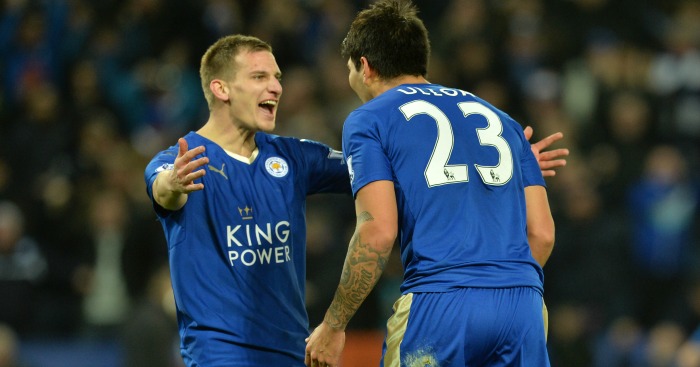 Marc Albrighton has backed Leicester City’s players to enjoy the pressure of the title run-in rather fall at the final hurdle.

The 26-year-old, like most of his team-mates, has entered uncharted territory with the Foxes heading into their final five games of the campaign already assured of a top-four finish and seven points clear of closest rivals Tottenham at the top of the table.

However, he is determined to make the most of whatever comes their way during the remaining weeks of the season.

Albrighton told Foxes Player: “It is fantastic. Obviously there are a lot of players in there who have never been in this situation before, me included, so we have just got to enjoy every day, every minute of it and embrace the moment.

“That’s what everyone is doing at the minute.”

Leicester maintained their advantage at the summit on Sunday, briefly extending it to 10 points with a 2-0 win at lowly Sunderland before Spurs saw off Manchester United later in the afternoon.

It was Leicester’s fifth successive victory and left them knowing three more will hand them the title whatever anyone else does.

The Foxes have already ensured they will, at the very least, have a Champions League qualifier to look forward, but the title looks to be theirs for the taking if they can hold their nerve.

Manager Claudio Ranieri has studiously avoided looking too far ahead as the bandwagon has gathered pace, and the message has certainly been heeded in the dressing room.

Albrighton said: “It’s just good to keep that winning habit going, I think that’s massive. The buzz you get from a game from winning sees you through that week, and then your confidence is high for the following week.

“If we can just keep that going, then everything else will look after itself.”

The win at Sunderland came courtesy of two trademark finishes from England striker Jamie Vardy, who ended a six-game wait for his 20th of the season with 66 minutes gone and then doubled his tally for the afternoon in stoppage time.

His goals have been a major feature of the club’s charge to the top of the table, but Albrighton insists his game is about much more than his touch in front of goal.

He said: “He’s huge. The reason we won the game was from his movement – and obviously a superb pass by Drinky [Danny Drinkwater] for the first goal – but Jamie’s movement is vital in that. Without him, we’d have to find a different way of playing.

“We obviously had a lot of chances towards the end where we could have wrapped it up and made it a little bit less nervous, if you like, but we got the goal late on with one of the last kicks of the game.

“But it was a solid performance, another clean sheet, which the defence is over the moon with, and another win.

“We knew what we were going to get here. It was going to be a battle – they [Sunderland] are desperate to survive in the Premier League, so we know from our experience last year how much fight you need to go into a game like this.

“They threw everything at us and we dealt with it well and hit them a couple of times on the counter-attack, which is back to what was winning us games before.”