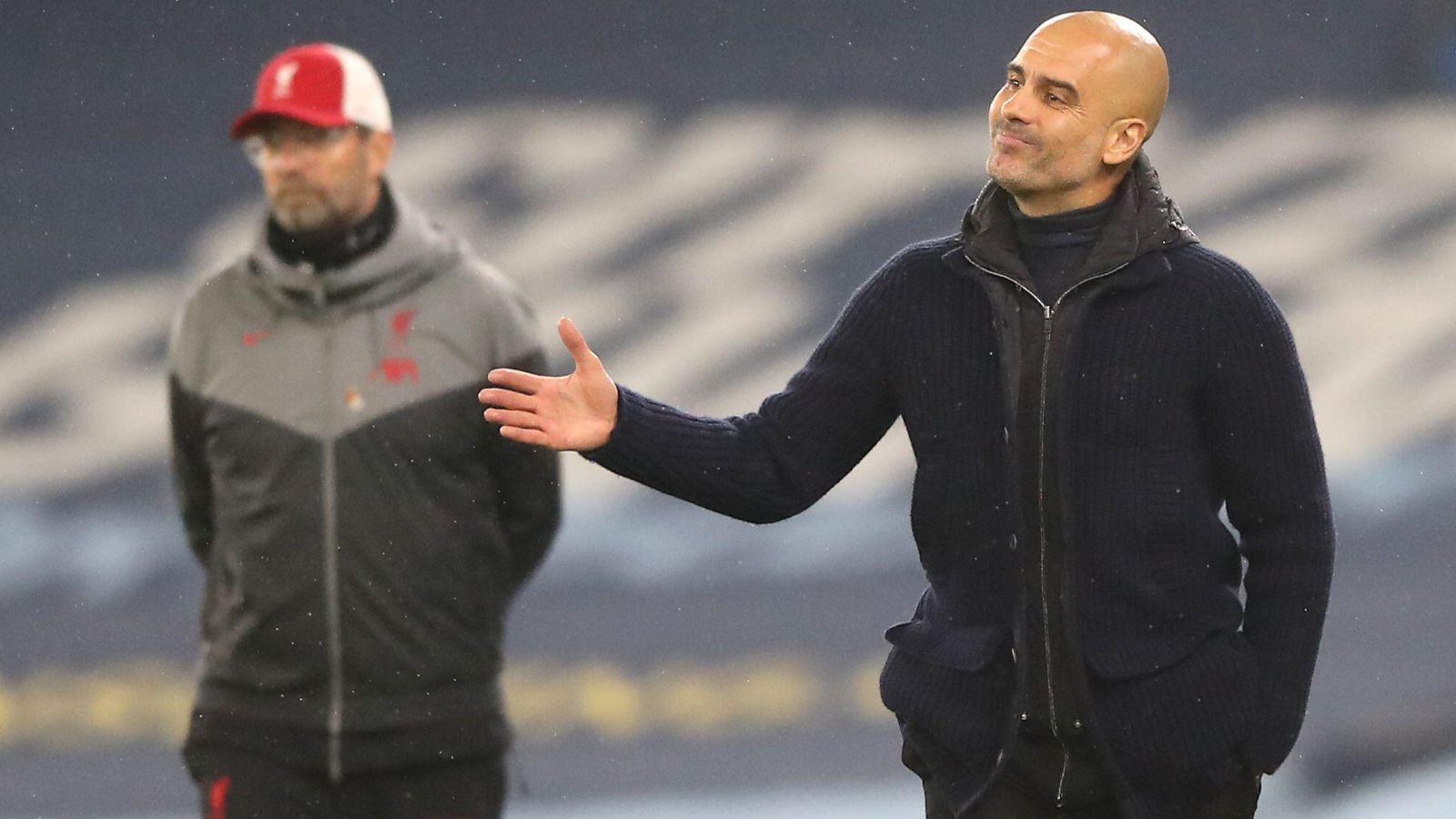 Pep Guardiola has shown himself to be smarter than Jurgen Klopp – but Liverpool have an ace up their sleeve when they go to Man City. Here’s Alex Keble’s preview of a potential title-decider…

The perception of this fixture is one of equals battling it out at the pinnacle of the sport, and although there is a case to be made that Pep Guardiola’s Manchester City and Jurgen Klopp’s Liverpool are indeed the two greatest club sides of all time, recent history does not support the notion this is an even contest.

Man City have lost just one of their last eight games against Liverpool. In fact, save for a flurry of Liverpool wins in the first few months of 2018 – a 4-3 in the Premier League and wins in both legs of a Champions League quarter-final – Guardiola has consistently understood how to get the better of his rival. He has beaten Klopp by three or more goals on three occasions, most recently in February last year, while their only meeting since – a 2-2 draw at Anfield – could easily have been another thrashing.

For the first 30 minutes of the game Man City completely dominated, swarming Liverpool and pinning them back, only for some costly misses to allow the hosts to build back into the game. As is increasingly the case in this fixture, Guardiola tactically out-witted Klopp.

First, he successfully targeted the weak point, right-back James Milner, by getting false nine Jack Grealish to double up with Phil Foden. He also had his team press relentlessly onto the Liverpool midfield, forcing them to give possession away cheaply, which was helped by Liverpool’s desire to play lots of long balls in behind the defensive line – stretching their formation to leave gaps for City to exploit.

Liverpool were ultimately able to ride it out and, thanks mainly to Mohamed Salah’s genius, take a point. But they cannot afford another slow start, and it is time Klopp bites back with a strategy that takes Guardiola by surprise because, though it hasn’t had cut through yet, the Man City manager seems to have cracked it. The consistent trick is to cram the no.10 space with bodies – which the Liverpool midfield have not historically been equipped to handle – and use a wide back three to build out down the wings, bypassing Liverpool’s forwards.

Klopp is unlikely to do anything substantially different, mind, again using a 4-3-3 and – as always against City – instructing his players to hit long and high passes behind the City defence to set his wide forwards away. There is certainly a chance this could work, especially down Salah’s side should Joao Cancelo leave his traditional zone to become an extra man in central midfield. The recovery pace of Kyle Walker, forming a back three for most of this game, will be very important.

But the main cause for Liverpool optimism is the existence of Thiago Alcantara, injured for the game in October but set for his second game against Man City on Sunday. In his first, he was substituted in the 68th minute with the score at 1-1. City went on to score another three goals.

Thiago remains an under-rated player, even now. There is nobody more important to what Liverpool do. His ridiculous technical ability, his capacity to read the game and play line-splitting passes that nobody else can see, and his composure when under pressure makes him the metronome of Klopp’s system.

He keeps Liverpool on the ball and camped in the opposition half, and whenever things start to slip he is there to take control, weave clear, and create order out of chaos. It is no coincidence Liverpool have won all 12 league games in which Thiago has started this season. His presence at the Etihad, coupled with Trent Alexander-Arnold’s return to patch up the right flank, should ensure we have a more even game.

Thiago’s battle with Kevin de Bruyne could prove decisive. They will largely occupy the same half-space as the match swings from end to end, with Man City likely to indulge in counter-attacks should one of Liverpool’s breaks come to nothing; Guardiola normally tells his team to recycle possession in order to regain their structure, but for a couple of years now he has changed his tactics for Liverpool matches. He knows Klopp’s side are most vulnerable when stretched by one of their own counters.

Much rests on the configuration of Liverpool’s front three. Rodri can be left a little exposed on his own at the base of midfield as Guardiola’s two eights roam forward, and although the City manager is generally more cautious against Liverpool – sometimes using a double pivot – Liverpool are still best advised to play Roberto Firmino, who can drop into gaps around Rodri. However, Klopp may be tempted to start Sadio Mane, Salah, and Luis Diaz together for pure pace. That would certainly produce a more chaotic game, theoretically favouring the visitors.

That’s about all we can say in a tactical preview of Man City v Liverpool, because an awful lot of what will happen depends on in-game changes from the two coaches – and nobody can predict those. From subtle tweaks to formation changes to triple substitutions, everything is on the table as both Klopp and Guardiola react and counter-react to one another. In that 4-1 a year ago, it was Guardiola’s second-half switch to a 4-4-2, with two false nines, that changed the rhythm of the game. No-one saw that coming.

And so, there’s little use in trying to predict what will unfold this time. Sunday’s game is a meeting of two geniuses at the peak of their powers. Mere mortals cannot tell you what will happen.