Home All The News Alex Pritchard: Huddersfield’s perfect 10 at the 8th attempt 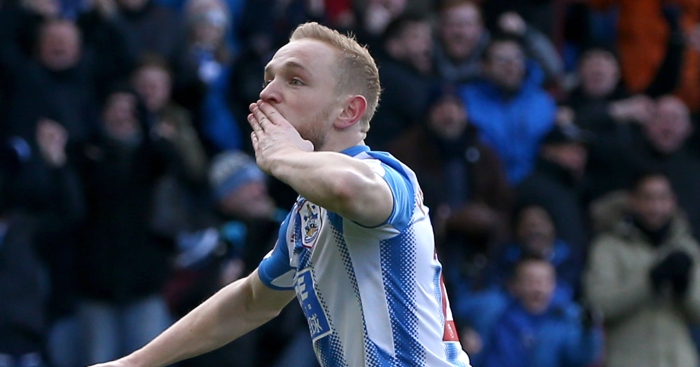 The only predictable thing in football is unpredictability. Huddersfield hosted Bournemouth on Sunday on a Premier League club-record low of six consecutive defeats, while their opponents were on a Premier League record high of seven games unbeaten. Quite why anyone expected anything other than a 4-1 home win is anyone’s guess.

Things finally went to plan. The Terriers have been slipping and sliding down the table for the past two months. They sat 11th after their most recent league victory, a 4-1 thrashing of Watford in December. Nine games later, their heads were only barely above the surface in 19th.

David Wagner deserves plenty of credit for taking the risk. “Alex is a young, British player who arrives as one of the top performers in the Sky Bet Championship and with a desire to prove himself in the Premier League,” said the manager at the unveiling of Alex Pritchard last month. It was a £14million gamble for a club who had never spent more than £2m on any one player before last summer.

For Pritchard, this was a moment four years in the making: the first time the midfielder had ever started a Premier League victory. He had never truly received an opportunity at Tottenham under three separate managers, and a loan spell with West Brom offered little reprieve. A fleet-footed, expressive, forward-thinking 5′ 7″ player was like kryptonite to Tony Pulis at The Hawthorns.

“It was a bit disappointing to finally leave Spurs,” Pritchard said upon joining Norwich in August 2016. “But in the end I couldn’t wait to get out of there. They just never gave me a chance.”

Yet while Norwich could offer Pritchard the first-team opportunities he so craved, it would never be quite enough. “Alex made it clear two games after getting back fit he wanted to leave,” said Stuart Webber, the Canaries’ sporting director, earlier this month. “He thought his destiny was the Premier League.”

Considering he has joined a manager who spent much of last season insisting that promotion from the Championship was “not a dream,” but “a vision,” Pritchard might have found the perfect fit at Huddersfield. His previous spells in the Premier League provided only a brief taste of “destiny”; his desperation to stay on that diet for longer than a handful of minutes will be a powerful weapon for the Terriers.

The 25-year-old was not brilliant against Bournemouth, but nor did he need to be. He offered a necessary link between the midfield and attack, relieving much of the creative pressure constantly pressured on Mooy’s shoulders. He was neat, tidy and intelligent in possession, often keeping things simple instead of trying the spectacular, but also worked incredibly hard without the ball. He is the ingredient which complements Huddersfield’s existing recipe, the final piece of the survival jigsaw. Instead of the club needing to change their style completely to suit their new signing, he is wonderfully attuned to them.

Pritchard is the eighth player to start as a No 10 for Huddersfield in the Premier League this season, but the 25-year-old offers something unique. He slots in seamlessly, while every other option requires Wagner to tinker with the system. “Ince can play there very well, as we have seen in pre-season and since the season got under way, but he is a winger,” said the manager in August. “Aaron Mooy is a ‘No 8’, so this is why we brought in Kasey Palmer, who was our only natural ‘No 10’.”

With Abdelhamid Sabiri, Joe Lolley, Collin Quaner and Elias Kachunga all having also failed to properly fill Wagner’s problem position, the manager might have finally struck a balance. In Pritchard, Huddersfield have found their perfect 10. With his “destiny” and Wagner’s “vision”, Town have every chance.