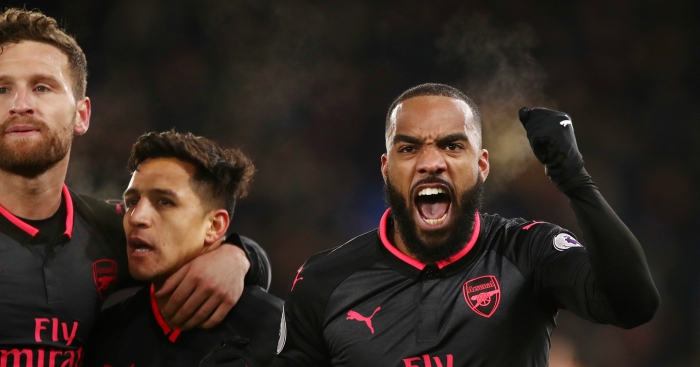 All things considered, it could be worse for Arsenal. With their 3-2 win over Crystal Palace, the Gunners have not lost since their incredible 3-1 defeat to Manchester United on December 2. They have matched results game for game with fourth-placed Liverpool, keeping alive their aspirations of returning to the Champions League after just a one-year absence.

So yes, it could be worse, but there’s still plenty of cause for concern. The struggle to remember when the opposite was last true acts as a serious counter-argument to both the idea that repetition is comforting, and the comedic principle that if something goes on long enough past the point of being funny, it becomes funny again.

Somewhere on that enormous and increasingly furiously-penned list headed ‘sh*t for Arsene to fix’, there will be growing discontent about the curious goalscoring habits of their big summer signing, Alexandre Lacazette.

Daniel Storey has written convincingly about what a nonsense it is to criticise strikers for supposedly being flat-track bullies. His conclusion: “If you are accusing every elite striker of the same footballing crime, the chances are that none are guilty.”

That article was published just three days after Arsenal unveiled Lacazette. Little did we know then that his signing heralded the coming of a completely different animal.

It’s hard to know what name to give to this rare new creature – after all, what exactly is the opposite of a flat-track bully? A flat-track wimp? A mountain bully? Neither term seems particularly fair or applicable to Lacazette.

When words fail us, we turn to the numbers. With Arsenal having now played every other league side at least once – they have clashed with Liverpool twice – Lacazette has racked up eight league goals and three assists. Taking those eleven contributions together, just five have come against the teams currently occupying the bottom half of the Premier League.

Yet the Frenchman boasts assists against Liverpool and Spurs, and goals against Manchester United, Everton, Leicester, and off the bench against Manchester City. It’s a tiny sample size, but Lacazette has a better goalscoring rate in starts against the rest of the top six than any of the Premier League’s six highest-scoring strikers last season.

After years of falling short in top six clashes, Arsenal should be unequivocally embracing that kind of big-game hunter; yet Lacazette’s record highlights that there is value in the much-derided “flat-track bully”-style striker.

To use a crude metric, removing each of Lacazette’s goals this season from the equation would deprive Arsenal of four points (turning wins against Leicester and West Brom into draws), but one more goal in each of Arsenal’s games against the bottom-halfers would add five (turning their defeat to Stoke into a draw, and draws against Southampton and West Ham into victories).

Adding those two crude numbers together may only produce a slender difference, but the point is that you would reasonably expect a player who turns it on against the bigger sides to be doing it even more so against the stragglers. Here’s one final crude metric just to hammer home the point: Arsenal are the only team in the top half of the Premier League to have scored fewer goals than their xG suggests they should have.

Arsenal may be keeping pace with Liverpool and Spurs in the race to reach the fourth door to the Champions League, but the implied flipside of “things could be worse” is “things could definitely be better”. With a more clinical striker in the more winnable games, Arsenal might already have had it halfway closed behind them.

None of this is to say that the blame lays entirely at Lacazette’s silky feet, but as the spearhead of both the 3-4-2-1 and 4-2-3-1 formations that Arsene Wenger has commonly deployed this season, he would be the first man in for questioning should Arsenal once again fail to make the top four this season.

Drawing these conclusions after just 20 games may be premature, but with less than half the season now remaining and a return to the Champions League at stake, it is on Lacazette to prove his bizarre goalscoring form is a mere statistical quirk, rather than a worrisome trend.