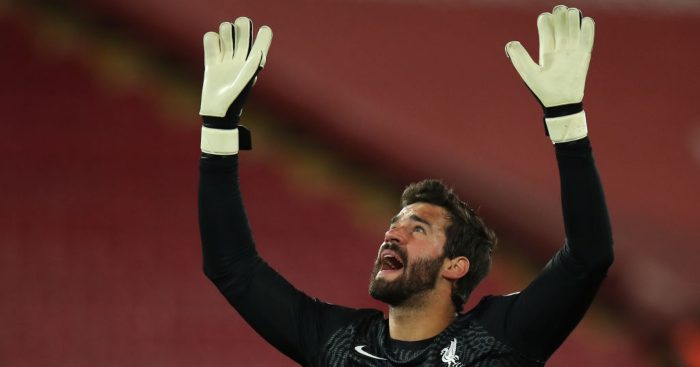 Liverpool goalkeeper Alisson has revealed that he went against doctors orders to return from injury earlier than first hoped.

The Brazillian picked up a shoulder in training ahead of Liverpool’s game against Aston Villa. Jurgen Klopp’s number one was expected to miss up to six weeks of action.

Adrian played in his place, as Liverpool suffered an embarrassing 7-2 defeat to Villa before the international break.

Alisson missed the Merseyside derby and their first Champions League game of the season against Ajax. But he made a shock return on Saturday as he started for the Reds against Sheffield United.

He is also set to start for Liverpool on Tuesday as they face Midtjylland in Group D of the Champions League.

The goalkeeper told the Daily Mail that his prayers were answered as he returned to full fitness sooner than scheduled:

“I pray a lot! It’s good to be back. First of all, I’m really happy. I tried to give my best and I have top physios on my side helping me as well to accelerate the recovery process.

“As soon as the doctor told me four to six weeks I told him ‘No doc, we go to two or three weeks maximum’ and he agreed with me.

“Then we just went for it and yeah I’m really happy to be back. I just want to thank the physios, the fitness staff, the doctors and goalie coaches who helped me in this process.”