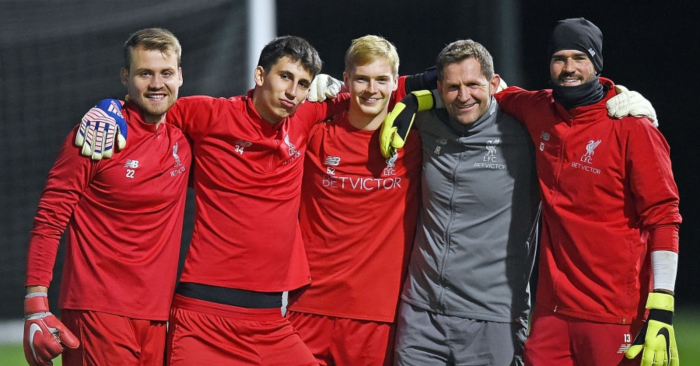 Brazil keeper Alisson has impressed since joining Liverpool from Roma for £56m.

The 26-year-old has conceded just ten goals in 16 games, keeping eight clean sheets in all competitions.

He has been a fine replacement for Loris Karius, who was sent out on loan to Besiktas after his high-profile and costly mistakes in the Champions League final.

Much of the blame for Karius’ performance was levelled at goalkeeper coach Achterberg, who has become a point of contention among Liverpool fans who deem him to be of insufficient quality.

Jurgen Klopp leapt to the defence of the Dutchman at the start of the season, and Alisson has now weighed in.

“John has proved to be not just a great goalkeeping coach but a great guy, a great person. Since I arrived I’ve noticed he’s loved by all here.

“He leaves me very calm and relaxed on a day-to-day basis and we learn from each other’s work. I’ve pointed out some areas that contribute to his work and likewise he has helped me with things I can improve in on the pitch.

“I believe the relationship between a goalkeeper and the goalkeeping coach needs to be an exchange, with a great deal of trust, and we have been developing this as a team, training together, and I’m getting on great with the other keepers.

“Kamil [Grabara] and Caoimhin [Kelleher] are players with great potential. I learn from them on the pitch as well.

“And of course there’s Simon [Mignolet], who has been at Liverpool a long time and a long time in the Premier League. He has been helping me a great deal in the day-to-day training and in games.

“They have all shown themselves to be great guys, great people.”