Home Johnny Nic All aboard the John Lundstram for England bandwagon… 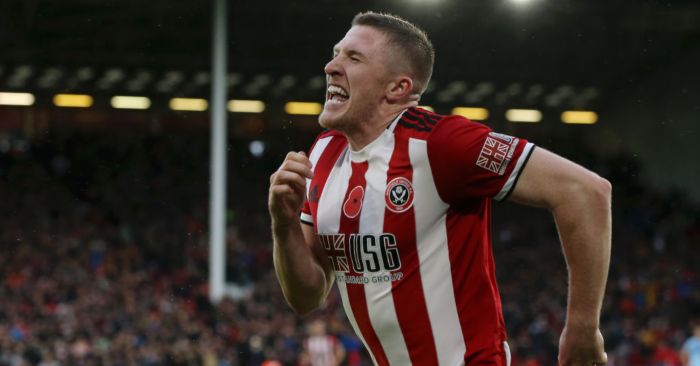 Who’s this week’s hero, Johnny?
This week’s hero is a Scouse 25-year-old midfielder, plying his trade in the top flight for the first time and currently propelling Sheffield United into the top six.

Starting his career at Everton, he represented England at every level from Under-17 to Under-20 but couldn’t get first-team action so was loaned out to six different clubs: Doncaster Rovers, Yeovil Town, Leyton Orient, Blackpool, Leyton Orient and Scunthorpe United. Eventually he was transferred to League Two Oxford United in 2015 where he spent two solid seasons. In the 2016/17 campaign, he received the award for Community Contribution at the club’s end-of-season ceremony. Playing in the Premier League must’ve seemed a long way away at this point.

In 2017 Chris Wilder took him to Bramall Lane for a mere £700,000 and he played a 40-game season for them, but in his second he turned out just ten times and was already anticipating getting a move away to play more football when his manager took him to one side and told him he wasn’t going to go anywhere and he was very much in his plans for the coming season.

And he was as good as his word. Already with 11 games under his belt and a fast-growing reputation as the beating midfield heart of the Blades, with some even talking of an England call-up, it has to be John Lundstram.

What have they done to deserve this then?
He scored twice against Burnley last weekend and continued his dominant form in a high-flying Sheffield United side. John is an inspiration to any player who, by their mid-20s, might feel as if their big chance has gone and their future will be the journeyman’s trek around the dusty end of the football fretboard. Getting the right manager at the right time can make such a difference. In this case, a manager who seems to have clearly understood that his player would be a top performer in the Premier League, regardless of how he’d played one step lower.

But this was no mere punt by Wilder and his team. It was all thought out and quite deliberate. They used pre-season games to trial John in a new position in a new system, and saw it worked well. Wilder said:

“The system suits him. It’s a slightly different shape. John (Fleck) and Oliver Norwood were the two best players in the division last year for me, when we had two sitting midfielders. But we always knew what John was about. We always knew his qualities, the same as Couttsy (Paul Coutts) before him. He’s raised his game over the summer, as we all knew we would have to do. Not just players, but conditioners, coaches and everyone else as well.”

It is an example to any manager that some players are just better at a higher level. The nature of the game suits them better. A less frenetic style and with more time on the ball really fits some, perhaps especially in midfield. In Lundstram’s case it has allowed the creative part of his game to flourish alongside the physical, powerful side.

But our John’s inspiration doesn’t stop there. His story shows that Premier League clubs simply do not have to keep spending big numbers on players; indeed it shows just how wasted so much money is when we routinely see £20m-£30m players come and go and make no impression at all when there are excellent players like the former Everton man available one or two steps below just waiting to flourish. It is a failure of clubs and managers not to recognise this fact. Look at the £52m spent on Fred. What a stupid waste. But what was the chance of Ed Woodward even knowing who Lundstram was, let alone buying him from Oxford two years ago for £700,000? He would’ve felt it totally beneath him.

I’ve been told by people working in coaching in the Football League that there are many players who would make excellent top-flight performers but are simply ignored or never scouted by top clubs. The reason? Because a big price tag is taken as a symbol of proven quality, even though time and again it isn’t a sign of how good they will be in the future at your club. I’m also told clubs and managers find it easier to sell a big spend to fans rather than a sub-£1m purchase from Oxford.

If this is widely true – and more than one man working in the industry assures me it absolutely is – it is a further indication of what a great guy Wilder is to not blindly follow the monied herd into trying to buy his way to success instead of just identifying a good player who can perform well in his team, regardless of how much he did or didn’t cost. He had the vision to see what he could do well in a new system in a new league. Why isn’t this more common?

A humble guy, Lundstram’s said that Everton were right to let him go when they did. At 25, like many players who suddenly find their feet in the top flight, the years of hard work, determination and graft are all really paying off, yet he knows where he’s come from and clearly is taking none of it for granted.

Media reaction?
There was an excellent interview by Mark Chapman with Lord Lundstram on this week’s Monday Night Club, during which he sounded as surprised as the rest of us as to how well it’s all been going. He sports an impressive type of Scouse accent too, the sort which you could grate nutmeg on.

Much has also been made on Fantasy 606 with Ali Bruce-Ball and Chris Sutton of the fact that Lundstram has been mistakenly classified as a defender, so three goals and an assist along with United’s winning start has made him an invaluable points scorer. He’s said himself that more people have been talking about this than his actual playing form.

FourFourTwo’s piece on our man was headlined: ‘John Lundstram is the one player who encapsulates the graft and the beauty of ambitious Sheffield United’.

The Daily Mail ran with the windy: ‘John Lundstram has gone from loan toiler barely getting a sniff in the Championship to the heartbeat of this electric Sheffield United team’.

Anyone grumpy about it?
Only football’s shallow shoppers who see money as the answer to everything, and who might fear Wilder’s use of Lundstram might inspire their own club to stop wasting money on expensive transfers and actually try coaching players to improve the team instead.

He has gone from being a squad player in the Championship to one of the most crucial players for his side in the Premier League. One of those rarities more suited to a higher division.

‘We had him on loan at Scunthorpe from Everton in 2015 and he was completely unremarkable. Joined Wilder’s Oxford that summer & something must have changed because he hasn’t looked back since. An amazing rise under a superb manager.’

I had Lundstram in my fantasy football team from Day 1 so zero jumping on the bandwagon from me. This probably makes me a Fantasy Football hipster.

‘He’s the epitome of Wilders square pegs in square holes approach. Hardly used in the championship promotion as he didn’t quite fit into the midfield set up. Tweak of tactics to suit PL necessitated a box to box midfielder and he grabbed it and has been an absolute revelation. Worth noting he has gone from being a bit of a scapegoat “not bloody Lunny again” as a victim of covering roles that weren’t ‘his game’ to being a crowd favourite. An example of the virtues of showing patience often missing on football terraces.’

‘FPL heroics aside, his rise from fringe player to regular starter in a division above is testament to him and Wilder. Was told he’d get chances this season so worked very hard over the summer to become a box-to-box ace. Wilder was true to his word. Both are reaping the rewards.’

‘Had never really heard of him aside from seeing his surname in lineups and assuming he was Danish or something. Was surprised and pleased to see a very chuffed looking man with a thick Scouse accent on Match of the Day.’

‘Unbelievably a player who genuinely seems suited to a level up.  Most fans had written him off in PL mainly due to the win% when he started in the champ.  But he’s backed himself & come back fitter, faster & stronger and looks like the real deal. FPL God & 1st name of team sheet.’

‘From a computer point of view, I’m glad he’s doing well with Sheffield Utd before I always liked him in Football Manager (same for John Fleck). And he helps my Fantasy team He may well be the best person named John out there.’

Last 2 seasons he’d become the player everyone moaned about when we had a bad game (even me) it’s now as if we’ve signed a £20 million classy midfielder who struts about and owns the game.. a fantastic and remarkable turnaround created by his own hard work and I love it 👏👏👏⚔

‘Written off as we always saw him as a direct replacement for Coutts / Norwood despite this not being his style. We can now accommodate him as we have sacrificed the attacking midfield (Duffy) position to add steel to midfield. Looks like he can do a bit of everything now.

‘His best Blades moment was actually this tackle on Jack Grealish, who hadn’t exactly endeared himself to fans in the game. Never seen a tackle celebrated like a goal before:

Ask and you shall receive Blades

What does the future hold?
There’s no reason why Lundstram can’t step up to international level and drive an England midfield the way he’s done for Sheffield if he keeps this up all season long. He certainly seems to have the temperament. His manager said recently:

“I don’t think John is bothered about acclaim. I’m not, if people do or don’t talk about him, either because he’s an important member of a group of players. Obviously, when he scores two in the Premier League, there are going to be headlines about him. He’s not the type of boy who is bothered though. He’ll just get on with it. Knowing what the group is all about, he’ll be very wary about saying something daft that the rest of the lads or the manager jumps on.”

It’s always great to see a player do really well who isn’t some sort of fashion brand to market by agents, who isn’t an egotistical prima donna, or a big-money diva. None of that is for Mr John Lundstram and let’s all stand and applaud him for that and wish him all the best. His is a story we can all get behind and enjoy.

hero of the week John Lundstram