Home Topical Top Ten All cash, no caps: The 10 most expensive uncapped players 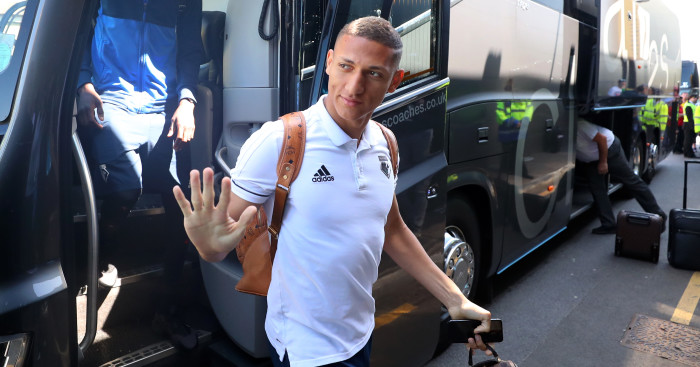 Everton have forked out 40 million quid to reunite Richarlison with Marco Silva, making the Brazilian the third-most expensive uncapped footballer of all time. And yes, “of all time” does very much mean “of the last couple of years”, because transfer fees be crazy these days…

10. Abdou Diallo (£24.8m, Mainz to Dortmund, 2018)
Solid work here from Mainz, who picked up Diallo for €5m after a couple of seasons as a bit-part player for Monaco either side of a season on loan in Belgium, then 12 months and 30 games later sold him on to Dortmund for more than five times that price. Diallo has captained France’s U21 side and at 22 could clearly get himself off this list in the years to come.

8. Anthony Modeste (£31.3m, Koln to Tianjin Quanjian, 2017)
There is perhaps no greater indicator of France’s insane depth of talent right now than Modeste’s haul of zero international caps at the age of 30. Maybe it’s that Blackburn loan spell still counting against him, but a return of 59 goals in 123 Bundesliga games for Hoffenheim and Cologne surely deserves more recognition than just another bog-standard big-money move to China.

7. Clement Lenglet (£32m, Sevilla to Barcelona, 2018)
There’s a distinct Franco-Brazilian flavour to this list, which is perhaps as unsurprising as the fact that most of these transfers also seem to have taken place in the last five minutes. There are some tough names to get past – some of them on this list – to win a place in France’s defence, but Lenglet has time on his side at 23, having done enough in 18 months at Sevilla to convince Barcelona to trigger his release clause.

6. Arthur (£35.5m, Gremio to Barcelona, 2018)
Over £35m for an uncapped Brazilian midfielder? That’s Arthur fortune. But it’s not hard to see what Barcelona saw in the deep-lying playmaker with outrageous passing stats. He had the best pass completion percentage (93.1%) in the Brazilian league last season, while also attempting more passes per 90 minutes (82.2) than any other player. And in the seven games he played for Gremio this season before completing his Barcelona move he improved those number to 94.8% and 92.2 respectively. Replaces Paulinho in the Barca squad after the very-much-capped Brazilian midfielder returned to China.

5. Malcom (£37.3m, Bordeaux to Roma Barcelona, 2018)
He was Malcom in the middle of one of this summer’s strangest transfers after Roma announced they were signing the Brazilian winger from Bordeaux only for the French club to then accept a higher offer from Barcelona. A more central role at Bordeaux last season saw him chip in with 12 Ligue Un goals and prompt that transfer scramble. Roma may feel distinctly disgruntled about the whole affair, but Bordeaux are chuckling all the way to the bank having signed the Brazilian for a mere €5m back in 2015.

4. Vinicius Junior (£39.6m, Flamengo to Real Madrid, 2016)
Real Madrid agreed this eye-wateringly expensive deal when Vinicius was just 16, with the deal post-dated to his 18th birthday earlier this month. Seven league goals in 37 games isn’t bad given he was 16 when he first played for Flamengo, while his 17 goals in 19 games for Brazil’s Under-19 side point to a future very much off this list. Doing so will surely provide his primary motivation to secure full international honours.

3. Richarlison (£40m, Watford to Everton, 2018)
Scored five goals in his first 12 games for Watford, and then none in the subsequent 26. The Hornets have still managed to more than triple their money though, as he rejoins Marco Silva at Goodison for £40m, potentially rising all the way to £50m. At 21, there is still plenty of time for the nifty winger to get himself off this list if his Silva reunion brings similar results to their previous successful yet all too brief time together.

2. Alex Teixeira (£42.5m, Shakhtar Donetsk to Jiangsu Suning, 2016)
After bashing 22 goals in 15 games for Shakhtar, Alex Teixeira looked all set for a move to Liverpool in the January transfer window of 2016. But the Reds baulked at a €50m asking price which, mad as it seems, was still quite a lot to pay for a footballer back in those halcyon days, and resigned themselves to doing business in the summer at a more acceptable price point. But Liverpool had not accounted for the Chinese Super League’s new-found wealth. Jiangsu Suning coughed up the cash in February, and off Teixeira went. It’s not gone well, really. Eleven goals in 28 games in his first season, eight in 19 in his second. Rumours of a return to Europe persist, but he’s 28 now and may be thinking some of his life choices have not been the best.

1. Aymeric Laporte (£57m, Athletic Bilbao to Manchester City, 2018)
Manchester City’s January signing has grown so weary of trying to break into the France team that he may use his Basque descent to attempt instead to unseat Sergio Ramos or Gerard Pique from the heart of Spain’s defence. Asked what emotion he felt watching France win the World Cup, Laporte was refreshingly frank: “It was jealousy, to be honest.”