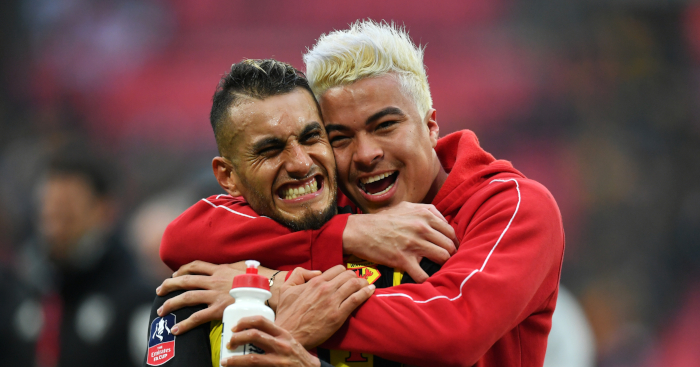 It was never intended as anything more than a coincidental curiosity, not that the headlines reflected that. They preached about how Watford could ‘do a Leicester’ after ending last season with a record identical to the Foxes’ in 2014/15 – the campaign before they won the most improbable title in football history.

Even as the Hornets embarked on one of the longest winning runs to start a Premier League season ever, they were never higher than third. The unerring dominance of Liverpool and Chelsea ensured Javi Gracia’s side were always looking down, fearful of flying too close to the sun.

They had earned their seat at the top table, but there were no pretences: they were keeping it warm for someone else.

The inevitable slide came soon after the remarkable rise, yet Watford never dropped lower than 12th. And while that hardly represents ‘doing a Leicester’, their ability to combine an FA Cup final berth and Europa League push has helped redefine that phrase.

This is no miracle. This is not a side predicting the changes in the weather to ride the wave of a perfect storm, capitalising on the collective collapse of the usual contenders. This is simply a rare case of a Premier League club actually making sense, embracing their role in the food chain, living within their means and enjoying themselves along the way.

This is feasible, explicable overachievement, far detached from Leicester three years ago. It might have seemed like the Foxes proved to mid-table clubs that anything is possible, but in reality their triumph only ensured nothing of its ilk would ever happen again. It embarrassed the elite to the point of overcompensation, and they enjoy a greater gap to those below them than ever before.

Watford have not shattered that glass ceiling, but they have shown that it can reflect a happy club rather than restrain one constantly trying to climb a greased ladder. They have shown that there is a life to be lived – to be enjoyed – beneath it.

They are 10th, four points above 11th and one off 7th. They are the highest goalscorers outside the top six. They are one of seven clubs with two viable routes to European football next season, and surely the happiest of all of them. They are in an FA Cup final.

The last three teams to finish 7th in the Premier League were knocked out of the FA Cup in the third round (Burnley, Everton, Southampton). The last six finals have featured teams that came anywhere from 1st to 5th or 15th to 18th. They could be the first team outside of Arsenal, Chelsea, Liverpool, Manchester City, Manchester United and Tottenham to finish in the top half of the Premier League and reach the FA Cup final since Everton a decade ago.

Even Leicester themselves tripped over the first possible hurdle when they won the title in 2016, aware that their temporarily disabled mid-table status prevented them from keeping two plates spinning at once. But by refusing to prioritise, Watford have reimagined the boundaries faced by every average but brilliant side.