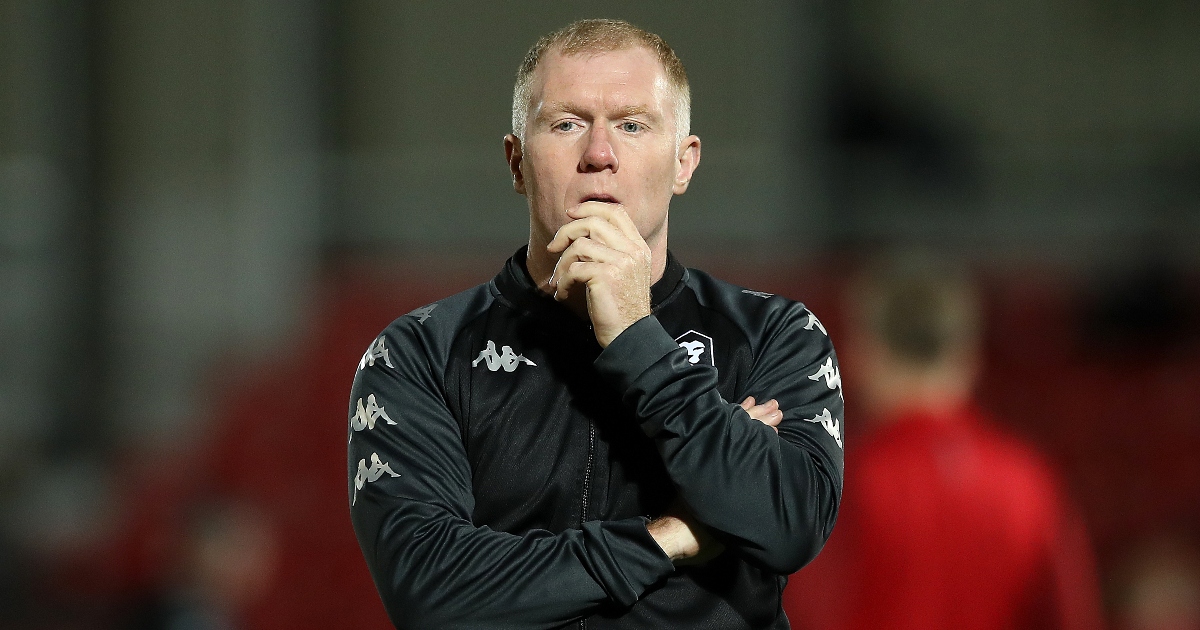 Club legend Paul Scholes says he is ‘worried’ for Manchester United ahead of their clash against Manchester City this weekend.

The former United midfielder was again critical of Ole Gunnar Solskjaer’s side after a subpar Champions League display.

The Red Devils drew 2-2 in Atalanta on Tuesday night, twice coming from behind thanks to goals from Cristiano Ronaldo.

Scholes criticised what he described as a “messy” performance in Bergamo and is fearing the worst as United host their arch-rivals on Saturday afternoon.

“They played alright on Saturday [vs Tottenham] but tonight it was a little bit messy,” Scholes said on BT Sport.

Raphael Varane was forced off with an injury in the first half, which has left the 46-year-old ‘worried’ as he has emphasised the importance of a solid defensive display against City.

“As soon as Varane went off, they seemed to go all over the place, really shaky,” he added.

“The quality in the middle of the pitch wasn’t great, giving the ball away.

“[Harry] Maguire, I don’t know if he’s still injured or got a hangover from the Euros, just doesn’t look right and he’s not with it at the moment.

“I don’t want to say it again, but with a performance like that second half especially no Varane on Saturday it has to be a slight worry.

“If you’re Pep [Guardiola] you would think you have a good chance to win. City think that anyway, at any point it will be a difficult game.

“But with no Varane it is going to be more difficult – saying that, they have the quality to score goals.

“Even in the Liverpool game, they produced three clear chances. United need to defend properly and concentration is key.”

Meanwhile, United boss Solskjaer was high in praise after Ronaldo saved his side against Atalanta.

Having wrapped up comeback wins against Villarreal and the Italians at Old Trafford, the 36-year-old rose to the occasion in Bergamo to once again save the under-fire manager.

“It is a tight game, flowed both ways,” the Norwegian said.

“Their two goals were very tight and we thought the first was offside. I thought he interfered with David De Gea’s view, but Cristiano is just incredible if there is anyone you want a chance to fall to and a difficult chance, it is just incredible.”